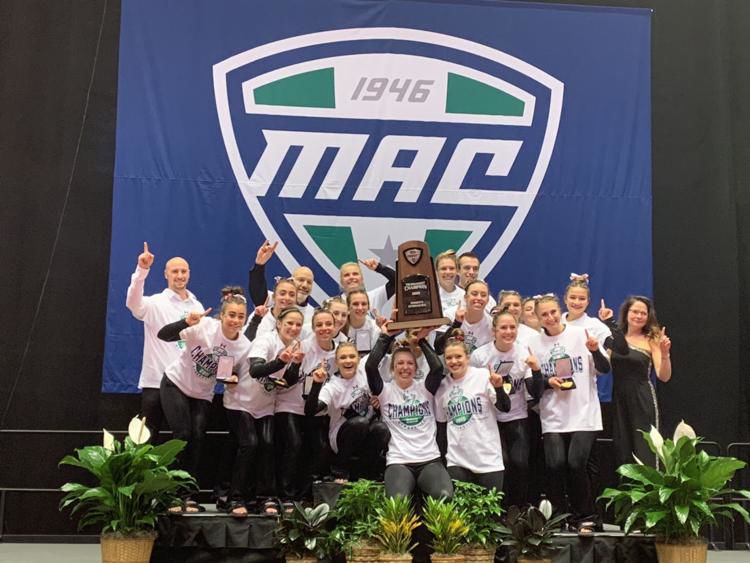 The gymnastics team celebrates after winning the program's first ever Mid-American Conference Championship March 23, 2019, in DeKalb.

In a weekend of three contests for the volleyball team, junior liberio Miranda Karlen made program history and surpassed 1,000 digs in her career.

Karlen’s 1,000th dig was the highlight of the season for a struggling volleyball squad that finished the season 8-22.

The final decision came down to first-year Mikko Malinen from Sweden, who fought hard but came up short in  7-5, 4-6 and 6-7 losses.

The Huskies baseball team started the MAC tournament with its best performance of the year from its ace pitcher, sophomore Michael Lasiewicz.

Lasiewicz shut out the Miami University–Ohio RedHawks, giving up only two hits and a walk in the Huskies’ 4-0 win.

“Masterful performance is all I can say,” Head Coach Mike Kunigonis said of the performance in a May 23 Northern Star article. “We’ve been waiting for that out of him all year. He’s our number one, and he pitched like it tonight.”

The Huskies would make it all the way to the loser’s bracket championship game, coming up just short of reaching the finals.

Number 7: Two Huskies drafted to the NFL on April 29

Fresh off of winning the MAC football title in December 2018, offensive lineman Max Scharping and defensive lineman Sutton Smith impressed enough at scouting combines to be drafted by a pair of NFL teams.

The Houston Texans selected Scharping in the second round, and Smith was selected by the Pittsburgh Steelers in the fifth.

Scharping started 14 games for the Texans in his first year, making two playoff game appearances before the team was eliminated in the divisional round.

Smith battled various injuries in his rookie season but has since landed on the practice squad of the Seattle Seahawks.

The women’s basketball team looked to pull off a late stunner of its own in the first round of the MAC tournament.

Senior guard Mikayla Voigt put the Huskies up 70-69 with five seconds remaining, but a foul allowed Western Michigan University a chance to win.

With 0.6 seconds on the clock left, Broncos’ sophomore forward Leighah-Amori Wool missed both her shots and sent the Convocation Center into a frenzy.

The Huskies advanced in the tournament in a true showing of the thrill of victory and the agony of defeat.

It may have taken four contests but the NIU hockey team picked up its first win as a Division 1 program Oct. 1 when it defeated Midland University 3-1 in West Dundee.

The win was the team’s first since being elevated to American Collegiate Hockey Association in 2018 for the 2019-20 season, joining the newly formed Midwest College Hockey Conference.

“It was great,” first-year goalie Brian Eisele said. “We’ve been trying to get that win for a few games now, and it’s good to finally get that monkey off our backs.”

It’s been a long season for the hockey team, suffering a long losing streak up until this past weekend, but the team can always hang its hat on the successes it found early in its tenure in the ACHA.

“I have been wanting to get it over and done with for a while,” Woods said. “I wasn’t sure what the number was, but I think now it’s over, it’s nice going back to playing and not worrying about how many more you need.”

The historic performance also led the Huskies to victory that night, beating EIU 68-41.

The departure of Rod Carey for Temple University in early January left NIU as the only school in the Football Bowl Series without a head coach.

A familiar face to Huskie fans was tapped to be the leader of the program.

Thomas Hammock was a running back at NIU for four seasons before a heart condition forced his early retirement in 2002.

Hammock, fresh off five years coaching with the Baltimore Ravens, was named as head coach Jan. 18, 2019, during a news conference at the Yordon Center.

“This has always been my dream,” Hammock said in his introductory news conference. “When I was a graduate assistant at Wisconsin, I said ‘I want to be the head football coach at Northern Illinois University.’ I know what Coach [Joe] Novak did for me is what I wanted to do for others.”

Hammock became one of the youngest current coaches in the country.

The gymnastics program beat out all its conference foes to clinch its first MAC title with an overall score of 195.975.

“There were tears rolling the entire time,” Martucci said in a March 23 Northern Star article. “Every single girl went out there and did her best routine. The emotions back there were crazy, well deserved and very well warranted.”

Head Coach Sam Morreale not only got to see his team find success but was awarded MAC Coach of the Year for the second time in his career.

Fans at the Convocation Center 1,248 strong stormed the court in celebration of the Huskies’ first win over a ranked opponent since 1973.

The men’s basketball team had a tall task ahead of it Jan. 22, 2019 when it hosted the 14th-ranked University at Buffalo Bulls.

It would take then junior forward Noah McCarty to give NIU the lead with a layup with 0.6 seconds remaining. The Huskies forced a turnover on the ensuing rebound for a 77-75 victory.

“It’s a good feeling,” McCarty said in a Jan. 23, 2019 Northern Star article. “Any time you get to play a ranked opponent it means a lot. To have that opportunity and to be able to come out on top, it’s a great feeling.”