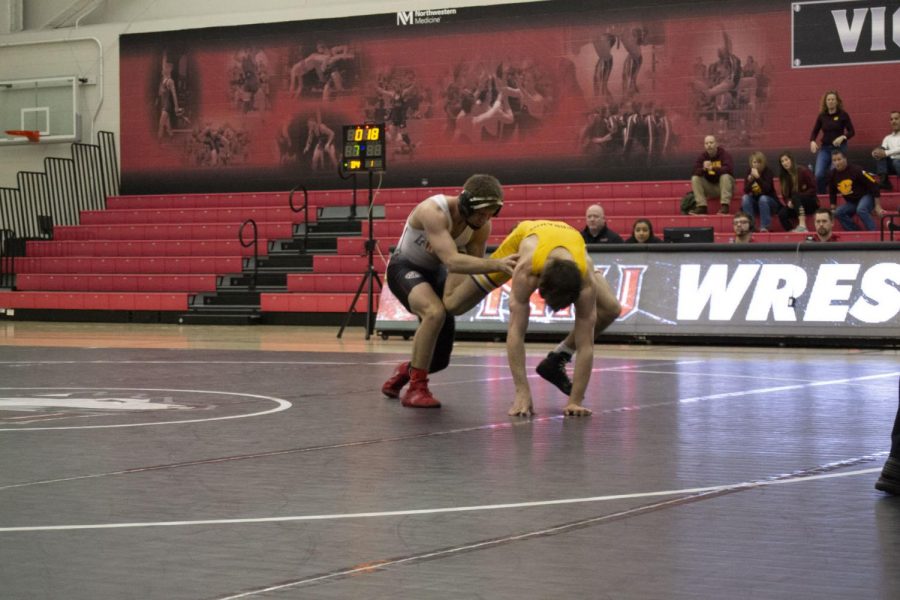 DeKALB — The wrestling team dominated Ohio University on Sunday with a 31-6 win to move to second place in the West Division of the Mid-American Conference.

The Huskies secured bonus points in four contests, including a pinfall victory by redshirt first-year Izzak Olejinik over junior Joe Terry at 165 pounds in the third period.

Head Coach Ryan Ludwig said he saw a lot of improvement from his team over the weekend, coming home with a three-dual win streak.

“From top to bottom of the lineup, our guys came to wrestle hard and score points today,” Ludwig said in an NIU Athletics news release. “We talked about getting better after Friday, and they responded well. The coaches are proud of the way this team competed this weekend.”

The dual opened with redshirt sophomore Bryce West picking up bonus points from the jump for NIU at 125 pounds. West defeated junior Trevor Giallombardo by a technical fall with a final score of 20-6.

Ohio picked up its first win of the day behind nationally-ranked 141-pound senior Shakur Laney, defeating redshirt first-year Anthony Gibson by decision 9-5. Bobcats junior Alec Hagan won a decision over senior McCoy Kent at 149 pounds in the following contest to make it 8-6 NIU.

The Huskies got back on track at the midway point of the dual with a win by redshirt sophomore Mason Kauffman over senior Kade Kowalski at 157 pounds.

The dual was rounded out by a narrow 3-2 decision victory for redshirt junior Max Ihry over redshirt first-year Jordan Earnest at 285 pounds.

NIU’s conference record moves to 6-2, placing it in second with a tiebreaker over Central Michigan University.

The Huskies will wrap up their regular season with a pair of home meets, starting 7 p.m. Friday against the University at Buffalo Bulls at Victor E. Court.