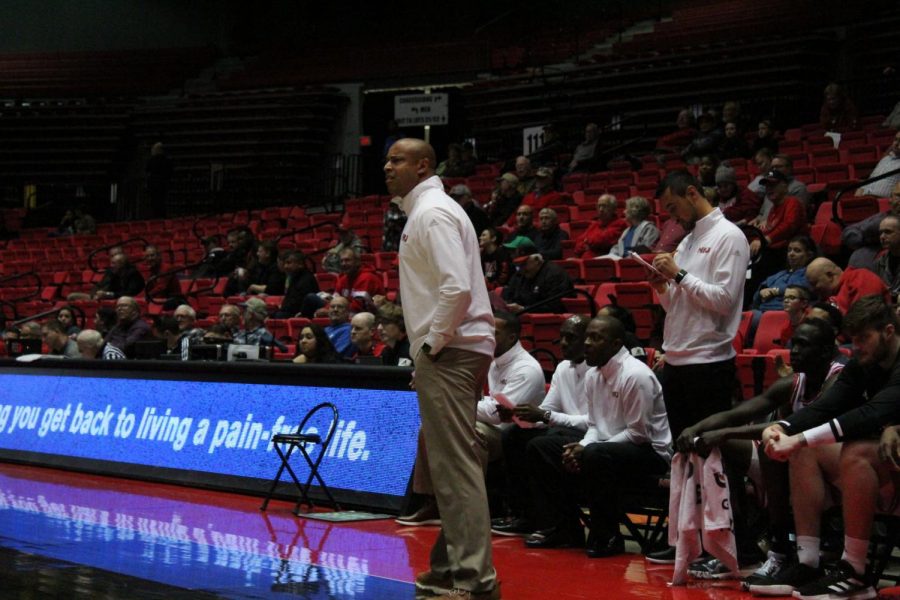 PITTSBURGH — After dropping games to Saint Mary’s College-California and the University of California-Davis on a west coast trip earlier this month, the men’s basketball team headed east to face the University of Pittsburgh in hopes of snapping its two-game losing streak.

The Huskies looked good late in the second half as they held a 50-44 lead with just under seven minutes remaining. They didn’t score from that point on, and the Panthers closed the game on a 15-0 run to finish off a 59-50 win at the Petersen Events Center.

Similar to the non-conference loss to Iowa State University in the team’s second game of the season, the Huskies went toe-to-toe with their Atlantic Coast Conference opponent for the first half, spending most of the first 20 minutes in the lead and owning a 30-29 advantage at the break.

The Huskies shot 41% from the field while hitting six 3-pointers while at one point stretching the lead as high as seven points. Senior guard Eugene German led the way for NIU with 11 points.

The Huskies also got a contribution from sophomore forward Nathan Lee. Lee, who missed all of last season with injuries, was finally cleared to play before the UC-Davis game, and came off the bench to contribute five first-half points.

It was much of the same to start the second half, with the lead again reaching seven points, 46-39, on a layup by Lee with nine minutes remaining. After the Panthers responded with two quick buckets, senior forward Noah McCarty answered with back-to-back layups of his own to make it a 50-44 game with 6:35 left.

That was it for the Huskies, as the Panthers’ switch to a 2-2-1 zone defense brought  NIU’s offense to a halt. The Huskies went 0-for-11 to finish the game, while the Panthers made five of their six shots down the stretch and added four points from the free throw line.

NIU finished the second half shooting just 9-for-30 from the field, including 1-for-13 behind the 3-point arc.

“It was a well-played game both ways,” NIU head coach Mark Montgomery said in a news release. “Our guys competed; they played hard, [but] when Pittsburgh went to that 2-2-1 back to a zone it definitely threw us off our rhythm. They were the more aggressive team. With three [minutes] to go, they seized the momentum, and we couldn’t make a basket.

German scored 18 points to lead the way for NIU, while senior forward Lacey James scored eight points and grabbed a game-high nine rebounds. Lee, who made his NIU debut in the loss to UC-Davis, came off the bench to contribute seven points.

Sophomore guard Trey McGowens led the Panthers, who are now 8-3, with 18 points.

The Huskies are 6-5 on the season and have two non-conference games remaining. NIU will travel 7 p.m. Thursday to face Chicago State University at the Jones Center, and then return home 1 p.m. Saturday to face University of Wisconsin-Green Bay at the Convocation Center.