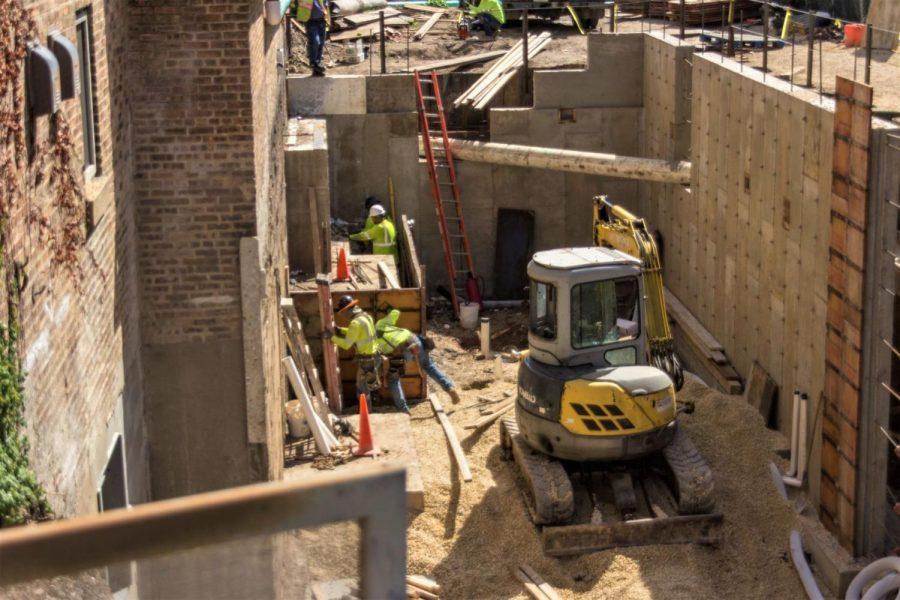 A construction crew works on expanding the basement, concession stand and bathrooms of the Egyptian Theatre, 135 N. Second St., in September 2019. The theater has been under construction since May.

DeKALB — As the Egyptian Theatre rapidly approaches its 90th birthday on Dec. 10, the theater’s staff is preparing to celebrate the structure’s anniversary, along with the upcoming completion of the theater’s expansion project.

The construction, which began May 1, is set to wrap up in April, Jeanine Holcomb, marketing and communications director of the Egyptian Theatre, said.

The goal of the construction is to repair the interior of the Egyptian Theatre, 135 N. Second St.

This will include restoring the paint and replacing the carpeting with a more “Egyptian design,” including scarabs and Egyptian symbols, Holcomb said.

The project will also include the expansion of the lobby of the theater, the restrooms and the concessions stand.

Holcomb said, one of the most important changes to the theater will be the installation of air conditioning, which will allow the theater to be open year-round for the first time.

While there are no live acts currently booked for the summer season, film series, especially animated films, are set to occur.

The first floor is projected to be finished in February, the second floor in March and full completion in April, although the end of construction doesn’t have a solidified date, Holcomb said.

The entire project will cost $5.5 million, and much of the money has come from a combination of funds from the City of DeKalb, grants and private donors, Holcomb said.

The project continues to be funded with a grant of $75,000 from the DeKalb County Community Foundation given to the theater Nov. 12.

The Egyptian Theatre was constructed in 1929 and opened Dec. 10 of that year, according to the theater’s official website.

The theater was one of over 100 created in the Egyptomania following the discovery of the tomb of King Tutankhamun by Howard Carter in 1922.

Now, there are only five Egyptian-style theaters left, with the one in DeKalb being the only one located east of the Rocky Mountain range, according to the theater’s official website.

Films, live acts and public events, such as political debates, are commonly hosted at the Egyptian Theatre.

Among the Egyptian’s acts throughout history have been musicians like B.B. King, Ray Charles, and Think Floyd USA, magician Piff the Magic Dragon and President John F. Kennedy, who appeared at the theater in October 1959 before he announced his candidacy for president, according to the theater’s website.

“I think the construction is very needed, and I look forward to the air conditioning,” Jeffery Chown, an emeritus professor in the Department of Communication, said.

Chown, a DeKalb resident since 1982, said he has been attending shows at the Egyptian since he arrived.

In particular, Chown said he enjoyed when the Egyptian screened Asian cinema.

Matthew Swan, communication professor and resident of DeKalb since 1992, said heis glad the theater will remain.

“I’ve seen a lot of movies and good musicians at the theater,” Swan said. “I like it when old structures are renovated instead of destroyed.”

The expanded restrooms and concession stand have garnered positive attention from Swan as well.

“I always felt they needed to expand concessions because people were always very crammed,” Swan said. “The restrooms also need to be expanded because there are currently only three stalls in each restroom.”

In 1978, the theater was added to the National Register of Historic Places, a subsidiary of the National Park Services.

“It’s a historical landmark and a great facility,” Chown said. “I went to see a production of Swan Lake which would have cost hundreds of dollars in Chicago, so it’s a great way to affordably experience culture.”

While the theater is still under construction, the programming has not halted. Upcoming events include “The Nutcracker” by the Beth Fowler School of Dance from Friday through Sunday and “A Charlie Brown Christmas Live on Stage” on Dec. 13.

In its nearly 90-year existence, the Egyptian Theatre has garnered a niche in the atmosphere of DeKalb, Matt Swan said.

“It has a unique décor that is very much of the time period and is very elaborate,” Swan said. “It has a timeless, old fashioned décor that can reawaken the movie palaces of old.”