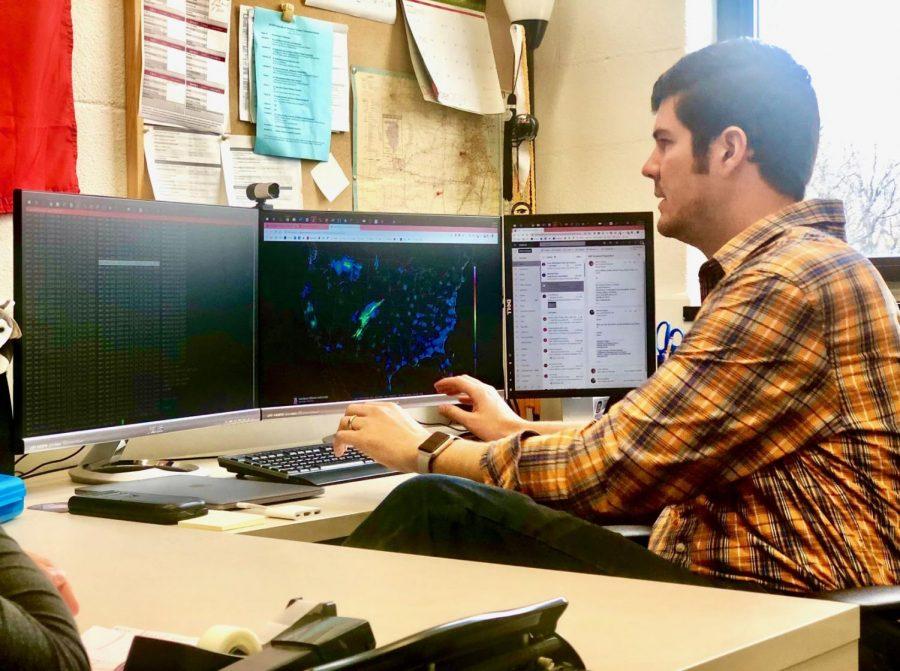 Victor Gensini, assistant professor in the department of geographic and atmospheric sciences, navigates weather maps and observation data Oct. 28 in his office.

Sweeping through Granville, the tornado destroyed homes, tore up streets and devastated the small town.

“It was raining all morning,” Victor Gensini, professor of meteorology, recalled. “I distinctly remember how muggy, how hot and muggy it was, and thinking, ‘Oh wow, there’s probably gonna be thunderstorms today.’”

That day left a lasting impression on Gensini’s life.

“My high school was hit by a tornado,” Gensini said. “So that’s sort of what sealed the deal in terms of meteorology for me.”

An alumnus of Putnam County High School located in Granville, Gensini sat at his office in Davis Hall and recalled the day the tornado struck.

“At the time, I didn’t understand anything about atmospheric science or why things were happening,” Gensini said, “But, I distinctly remember going outside and seeing the big cotton ball, the big thunderstorm cumulonimbus cloud and thinking, ‘Wow, that’s powerful.’”

Gensini serves as an assistant professor at NIU’s department of geographic and atmospheric sciences. He became curious about meteorology after witnessing the aftermath of the tornado firsthand.

“That sort of led to me searching for an undergraduate program in meteorology, and [I] found NIU,” Gensini said happily, “[I] visited NIU, loved the campus, loved the faculty and then like I said, [I] stayed here for my master’s degree as well.”

As an undergraduate student, Gensini was involved in the student chapter of the American Meteorological Society, Mortar Board Senior National Honor Society and the University Honors Program.

A double Huskie, he received his bachelor of science in meteorology and master’s degree at NIU. He later earned his Ph.D. from the University of Georgia.

Each of his educational degrees are framed in his office. A bright red NIU flag drapes the white walls, and a Huskie plush sits on his desk.

David Changnon has known Gensini throughout his undergraduate and graduate school years at NIU.

“Even then, [Gensini] demonstrated passion for the field,” Changnon said.

He said he’s amazed at Gensini’s “incredible interest” in meteorology and what he’s been able to accomplish at such a young age.

Gensini taught at the College of DuPage for five years before arriving at NIU in 2017.

Gensini has received several grants including the Unidata Equipment Grant, the State of Illinois Perkins STEM Grant and the College of DuPage Presidential Grant.

He has been featured in BBC World News, USA Today, the Washington Post, CBS News, the Daily Herald, the Chicago Tribune and more.

“Dealing with media is always an interesting part of any professor’s job, especially when you get published research and you start to relay findings to the general public,” Gensini said. “I personally enjoy it. I embrace it. I think it’s important to disseminate research knowledge and so anytime our research group comes up with a finding, I want to make sure that we can control the narrative and really deliver those results to the public in a way that they can digest.”

“I love it,” Gensini said, describing his passion for teaching. He said he finds it rewarding seeing students making discoveries and understanding the topics during his lectures.

“What continues to drive me now is how these extreme events are changing in a different climate, so as humans continue to emit carbon into our atmosphere we see climate change happening everywhere,” Gensini said.