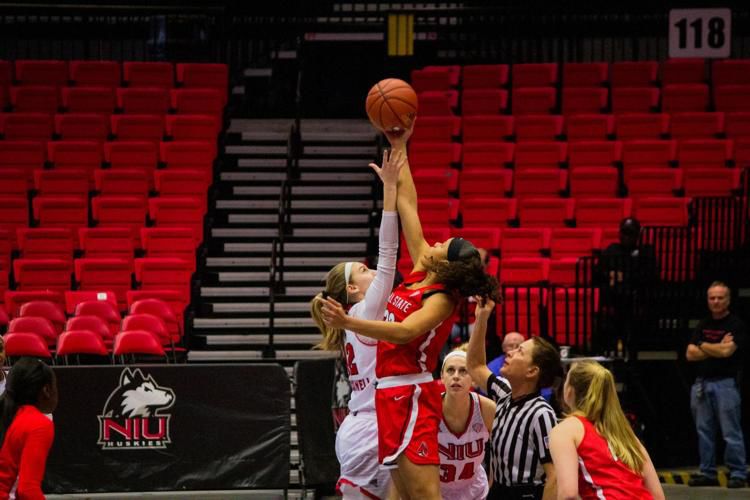 Junior Forward Riley Blackwell goes up for a jump ball March 6 during NIU's 67-64 defeat to Ball State University at the Convocation Center.

DeKALB — The women’s basketball team is set to kick off its regular season 11 a.m. Tuesday at the Convocation Center against the Harvard University Crimson. NIU is coming off a solid performance Oct. 29 against Judson University, winning its preseason match 110-44.

Both Woods and Poisson went down with season-ending knee injuries early last season that hindered the Huskies severely. Woods’ injury occurred against the University of Nevada on Dec. 2, while Poisson’s occurred on Nov. 20 against Chicago State University.

Outside of Woods’ and Poisson’s comeback, NIU has returning players in junior guard Errin Hodges and Nikitinaite. Hodges averaged 7.2 points and 5.2 rebounds per game during the 2018-19 season, while Nikitinaite averaged 12.1 points in 32 games.

Head Coach Lisa Carlson talked about the mixture of players that will be beneficial for this team this year. Carlson said the roster depth will help with the team’s expectations this season.

“We’re elated to have such key people back in uniform,” Carlsen said. “We’re deep, that’s definitely an asset for us, and I really like our young kids we have; yet we have a ton of veterans that we put on the floor and been through the grind before.”

For the game against Harvard, it won’t be a cake walk as the Crimson are coming off a solid 2018-19 season, winning 17 games and appearing in the Women’s National Invitation Tournament. The Crimson are led by junior guard Kaitie Benzan, who averaged 14.3 points per game in 30 games last season.

Carlson said Harvard will pose a tough challenge early in the season.

“They rely a lot on their size, and we rely on our ability to play the full court,” Carlsen said. “So it will be a contrasting style of play, which will be exciting as well.”

The Huskies have won their previous three season-opening games, including the 2018-19 campaign-opener against Yale University.