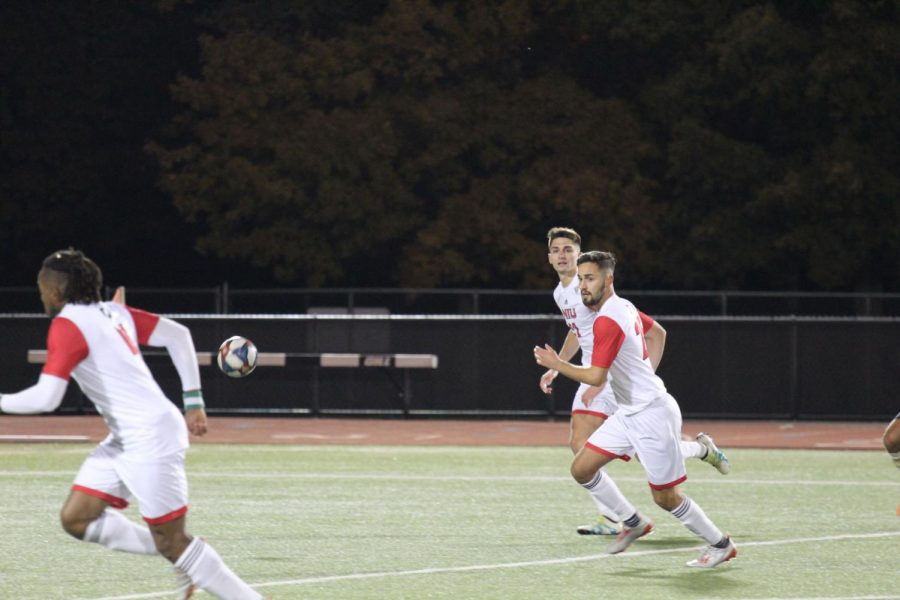 Huskies fight for the ball Oct. 25 during NIU's 3-2 home victory against Western Michigan University at the Soccer and Track and Field Complex.

DeKALB — An early goal doomed the Huskies, as they fell to Bowling Green State University in their final regular season game 1-0.

The Huskies were not able to capture the final MAC win which would have allowed them to host a MAC tournament game.

Head Coach Ryan Swan said the team was disappointed it did not perform to the best of its abilities.

BGSU’s first goal came nine and a half minutes into the game. Junior midfielder Vinny Worner scored inside the box after receiving a pass from sophomore defender Matt Walters on the right side.

The Huskies’ defense was able to stay solid after the Falcons goal. First-year goalkeeper Martin Sanchez was able to acquire 4 saves in the first half, anchoring the defense.

NIU couldn’t generate any momentum on offense in the first half. The Huskies were only able to get off one shot, none on target.

In the second half, neither team was able to find an advantage on the scoreboard with the halftime score turning into the final score. The Huskies were able to turn up their offense with seven shots.

BGSU senior goalkeeper Anthony Mwembia had four saves in the second half to keep the Huskies off the board.

With this loss, the Huskies’ record drops to 7-9-1, losing 2 straight games against MAC opponents.

The Huskies hold a 2-3 record in the conference, tied with BGSU. The Falcons now hold the tiebreaker, moving NIU down to fifth place.

The Huskies will begin the MAC championship tournament Tuesday in a rematch against Bowling Green State University at Cochrane Stadium.

Kickoff is to be determined.