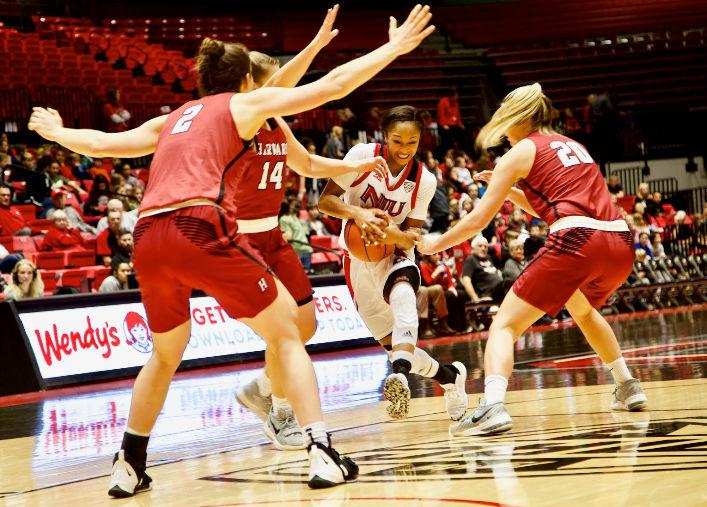 DeKALB — A second quarter run from the Harvard University Crimson buried the women’s basketball team 59-53 Tuesday in its opening game.

“[It’s] obviously not the result we were looking for,” Head Coach Lisa Carlsen said. “We got a lot of good looks on the offensive end, but the ball didn’t go in the basket nearly often enough.”

NIU struggled offensively, shooting 22% from the field and 20% from the three-point range.

Redshirt senior guard Courtney Woods scored a team-high 22 points in her first game back since tearing her ACL during the 2018-19 season. Woods shot 32% from the field, hitting one three-point shot in 10 attempts. She increased her point total at the free-throw line, hitting seven of eight shots.

“I felt good,” Woods said. “I need to be able to impact the game in other ways. I struggled to put the ball in the basket when I couldn’t get a three in.”

First-year guard Lola Mullaney, who scored 14 points in the first quarter, led Harvard through the game. Mullaney hit four of her six shots from deep range while grabbing four rebounds. Her performance helped Harvard obtain a 20-16 lead after the first.

In the second quarter, the Huskies’ offensive struggles started to surface, and their defense could not pick up the slack.

The Huskies were outscored 19-8 in the second quarter, allowing a 17-point run by the Crimson. The lead grew to 18 points, but the Huskies were able to cut it down to 15 by the half.

“In the first half [there] were times we were a little [relaxed] on the defensive end, and when you’re not shooting the ball well, those things get exploited,” Carlsen said.

In the second half, the Huskies were able to turn up the intensity, keeping the Crimson to 20% shooting. In the third quarter, Harvard shot three of 15 from the field. NIU was not able to capitalize, hitting only one shot in the quarter.

The Huskies were able to cut the lead down to four points by hitting 11 free throws in the fourth quarter, missing only one. NIU played the foul game late in the game, allowing Harvard to shoot 40% from the line, missing 12 free throws that would have put the game out of reach for the Huskies.

Mullaney finished with 25 points, and senior forward Jeannie Boehm finished with 16 points and 14 rebounds to help the Crimson to their first win of the season.

“[Harvard] left us opportunities to get back in the game,” Carlsen said. “I thought we got good shots, and we are going to take good shots again.”

The Huskies’ next game will be 1 p.m. Sunday at Scheels Center in Fargo, North Dakota, against the North Dakota State University Bison.