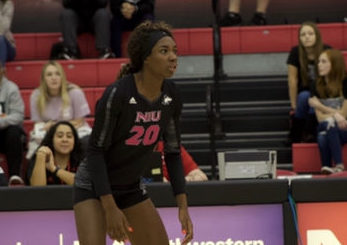 DeKALB — The volleyball team fell short in two-away matches Friday and Saturday and now are out of contention to win the Mid-American Conference West division. NIU was swept in the matches, losing to the Eastern Michigan University Eagles and Central Michigan University Chippewas 3-0.

Before the road trip, NIU was riding high after two big wins Oct. 25 against Kent State and Oct. 26 against Ohio University. During the homestand, the Huskies posted 106 kills and a hitting percentage of .285%.

NIU failed to carry momentum through its next two matches, recording 72 kills and a combined hitting percentage of .184% against EMU and CMU.

Consistency has been a major issue for the Huskies all season long and has stopped them from recording a winning streak this season.

With four matches left, Head Coach Ray Gooden talked about what he expects out of his team for the remainder of the season.

“We are improving; we just want to continue being consistent and execute,” Gooden said. “That’s what it’s about this time of year. We got to do a better job of executing when we have the opportunity.”

NIU came out with intensity in the first set, jumping out to an early 8-5 lead after the first 13 volleys. The Huskies extended their lead to 15-11, after a kill by junior middle blocker Kennedy Wallace.

The Huskies could not hang on, as EMU stormed back and shocked NIU to win the first set 25-23.

NIU looked poised to even the match at 1-1 early in the second set, taking an 8-6 lead through 14 volleys. NIU’s lead was short lived as EMU tied the set 8-8 after a service ace by Cassie Haut, redshirt senior middle blocker.

NIU would reclaim control of the set on a 8-5 run started by Kaitlyn Bell, first-year outside hitter, giving NIU a 16-13 lead. EMU had a run of their own late in the second set, and it outscored NIU 13-8 to shock the Huskies 26-24.

EMU would go on to win the third and final set 25-22 in thrilling fashion, as there were five ties in the set. EMU finished the night with 47 kills and a hitting percentage of .252%, which is considerably better than their season average of .208%.

NIU posted a hitting percentage of .297% on the night. NIU’s top performers were Wallace with 12 kills and sophomore setter Grace Balensiefer with 35 assists.

Gooden talked about his team’s failure to capitalize at the right moment was key on how they lost.

“We had plenty of opportunities,” Gooden said. “We weren’t able to finish it, but that’s one of the hardest things about playing on the road. It’s a lesson to learn from being able to finish the play in key spots.”

CMU went on to win the set 25-15 and take a commanding match lead of 2-0 heading into intermission.

NIU continued to struggle in the final set of the match as it had 7 errors and recorded 11 kills. On the other side of the net, CMU thrived as it recorded a match-high 15 kills and only one error.

CMU won the set 25-16  led by junior outside hitter Kalina Smith who had 12 kills and two blocks in the match. NIU’s top performers were Wallace with nine kills and Balensiefer with 19 assists.

“[CMU] is playing at a championchip level right now,” Gooden said. “We had good moments against them [but] we weren’t able to string them together.”

NIU continues MAC play 6 p.m. Friday at Victor E. Court in the Convocation Center against the University of Toledo.