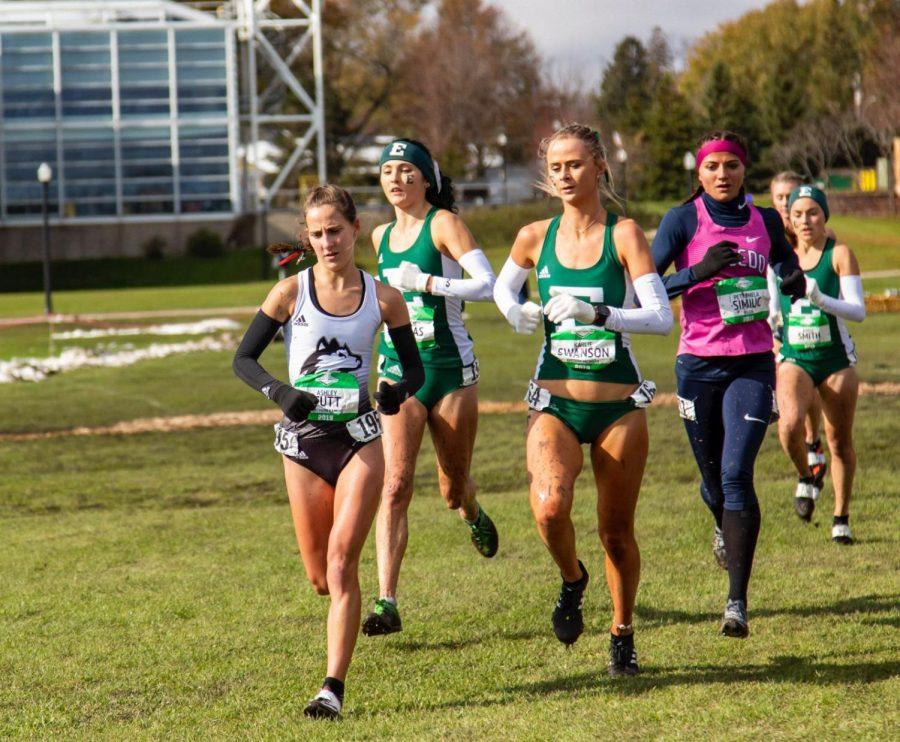 Junior Ashley Tutt leads the pack Nov. 2 during the 2019 Mid-American Conference Championships hosted by NIU at the North 40 course.

The Huskies arrived Saturday at NIU’s North 40 course with hopes of winning the program’s first-ever Mid-American Conference title. With front running juniors Ashley Tutt and Mackenzie Callahan in the field, the Huskies were in position to win the first conference title in school history.

With Tutt winning the individual title and Callahan finishing third, final results came down to the wire. When the top five Huskie runners hit the finishing chute, they ended up two points short of Eastern Michigan University, which posted a team score of 60 to win the 2019 conference crown for its fifth year in a row.

The result was bittersweet for the Huskies. Tutt ran a brilliant race to capture the individual title; Callahan finished third and Erika Hibser earned All-MAC Second Team honors with her 13th place finish. Still, the Huskies fell short of winning the coveted team title by the smallest of margins.

“I’m very proud of how they ran,” Head Coach Adrian Myers said. “I don’t know where we would’ve found two more points, but I just wanted to win one for the seniors.”

With the temperatures in the mid-30s and a cold wind blowing from the north, Tutt ran with the pack for the first two kilometers of the 6K race but threw in a surge that put her in the lead of the race for good. Tutt gradually stretched out that advantage and won the race in a time of 21 minutes, 18.5 seconds. Graduate student Natalie Cizmas from Eastern Michigan, who won the individual title last year, was second at 21:28, while Callahan came home in 21:47.

The win was the fourth of the season for Tutt, a junior who was also named as the MAC Runner of the Week three times this fall. She becomes the first runner in school history to win an individual title. Tutt also took 2019 First Team All-MAC honors, joining teammate Callahan.

“I was going really conservative, and my coach told me to try and hold off until the 4K mark,” Tutt said. “I felt good and just wanted to take it. I know this course and the hills, and my whole goal was to try to do my best and win the race for the team.”

Eastern Michigan set a MAC record with its fifth straight team championship, and Head Coach Sue Parks was named Coach of the Year for the sixth time.

“We knew Northern would be really tough at home, and they have ran well all season,” Parks said. “It was a knock-down, drag-out battle the whole way. Northern gave [its] all, and we did too, and we just happened to come out on top.”

Despite falling short of the team title, it was another step forward for the Huskies in Myers’ fifth year at the helm of the program. The Huskies have now finished second twice and fourth two other times in the MAC, having never finished higher than eighth in the conference meet prior to 2015.

“It’s been a lot of hard work in changing the culture and the tradition and the expectations of the program,” Myers said. “We’ve brought people in who have bought into it.”

Tutt credits the teams’ success to the camaraderie that has been there all season.

“We’ve just come together a lot more this year,” Tutt said. “We all love each other and are so sad for each other [in not winning the MAC], but it’s just been an amazing experience this year.”

The Huskies’ next race will be Nov. 15 at the NCAA Division I Midwest Regional in Stillwater, Oklahoma.

The Huskies look keen on improving on their 15th place finish at the 2018 regionals.