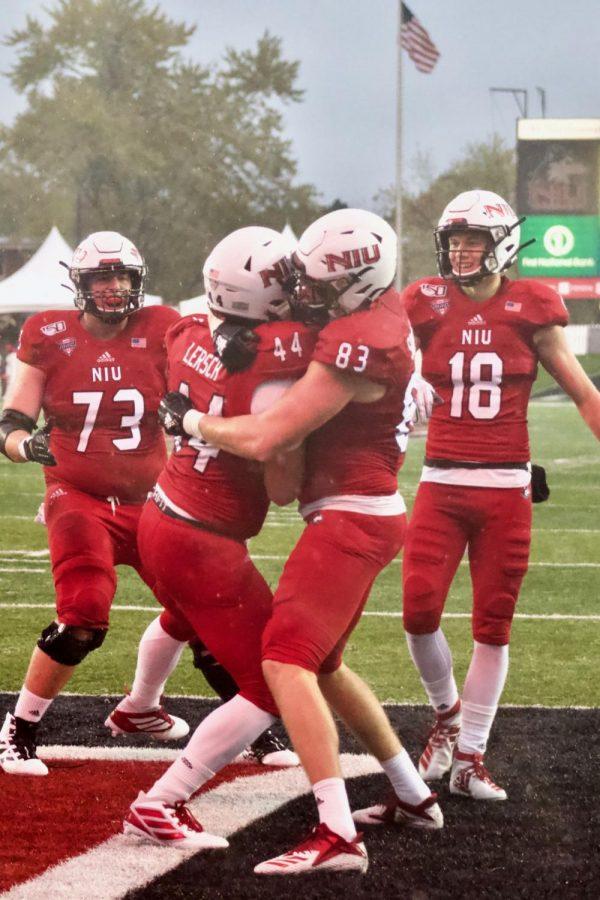 Huskies celebrate after a touchdown Oct. 26 during NIU's 49-0 win against the University of Akron at Huskie Stadium.

DeKALB — The NIU football team held off a comeback Wednesday from the University of Toledo Rockets with a late field-goal by John Richardson, redshirt first-year kicker, to win 31-28.

The Huskies led 28-7 after three quarters, but Toledo scored three touchdowns in the fourth quarter. NIU took back the lead on a 13-play, 68-yard drive.

Junior quarterback Eli Peters started his first game of the season for Toledo, throwing for 300 yards and three touchdowns.

NIU tried to set the tone early with a fumble recovery by redshirt senior safety Trayshon Foster after Bryant Koback, Toledo sophomore running back, coughed up the ball at the NIU 24-yard line. The Huskies proceeding drive stalled out with a failed fourth down conversion.

Toledo struck first on the scoreboard with a four-yard touchdown catch by Devin Maddox, redshirt first-year wide receiver, but NIU would rebound off a crucial Toledo mistake.

Daniel Crawford, Redshirt senior tight end, went unguarded by the Toledo defense, allowing him to make a wide-open catch from senior quarterback Ross Bowers for a 36-yard touchdown to tie the game 7-7 after the first quarter.

The Huskie offense gambled on a fourth-and-short early in the second quarter, only this time with Childers behind the center. On an option keeper, Childers fooled the defense and ran untouched for a 40-yard touchdown run, allowing NIU to take the 14-7 lead.

Toledo looked to put itself deep in NIU territory off a catch by junior wide receiver Bryce Mitchell, but Mitchell was forced out of bounds before the catch by Thomas for an illegal touching penalty against the Huskies The play near halftime was the closest either came to a touchdown before the break.

Out of the locker room, Toledo was marching down the field before redshirt sophomore linebacker Jordan Cole went down to force an injury timeout and stop Toledo from running a no-huddle offense.

The Huskies capitalized off the fumble, several penalties by the Rockets and a 23-yard catch by Marcus Jones, redshirt senior running back, to put NIU at the goal line. Harbison dived in for the touchdown to give NIU a 21-7 lead.

Harbison added a 43-yard catch to his statline on the following drive to help set up another Huskie touchdown. Childers dived at the goal line and was pushed into the endzone to make it 28-7 at the end of the third quarter.

The momentum quickly shifted just minutes into the fourth quarter. Following a 34-yard touchdown throw by Peters to Mitchell, a bobbled snap by redshirt senior punter Matt Ference gave the Rockets possession inside the NIU redzone.

Two plays later, Peters found Mitchell for a 13-yard touchdown pass to shrink NIU’s lead to 28-21 with 12:23 still on the clock.

On Toledo’s next possession, another Mitchell catch helped set up a seven-yard rushing touchdown by senior running back Ronnie Jones to tie the game at 28-28 with 5:07 remaining.

NIU was able to reach Toledo territory thanks to a pass interference penalty, and rushes from Harbison and Childers put the Huskies in field goal range. Richardson hit a 25-yard field goal with 41 seconds remaining.

With one timeout, Toledo only needed a field goal to send the game to overtime. The Rockets reached NIU’s side of the field but couldn’t stop the clock to attempt a field goal.

The win for NIU keeps bowl eligibility hopes alive with a 4-6 overall record and 3-3 in Mid-American Conference play. The Huskies also eliminated Toledo from MAC title contention for the second year in a row.

The team has a short turnaround, playing again Tuesday night in DeKalb against the Eastern Michigan University Eagles. Kickoff is scheduled for 6:30 p.m.