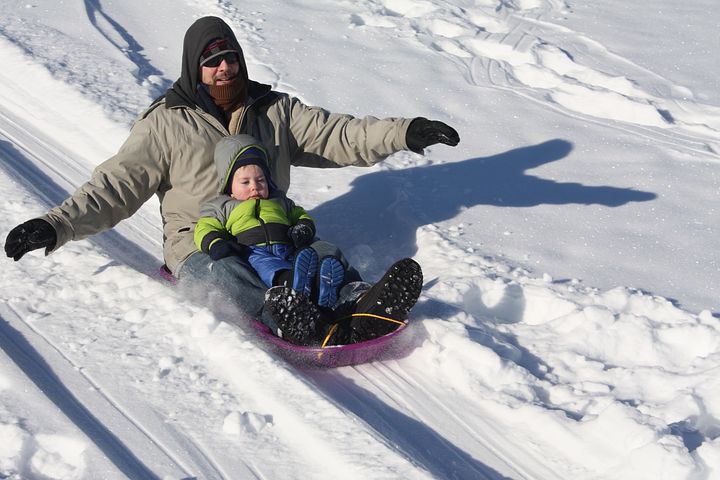 DeKALB – The DeKalb Park District will be organizing a community gathering in celebration of the grand opening of the Hopkins Park Sled Hill 10 a.m to noon Saturday in Hopkins Park, 1403 Sycamore Rd.

With the amount of snow DeKalb has received over the past few days, the activities at the event may change, Superintendent of Recreation Greg Bruggeman said.

From 10 to 11:30 a.m. the district plans on playing pumpkin bowling; however if there is enough snow to sled on, they may cut back or eliminate bowling altogether to have more time to sled on the new hill, Bruggeman said. Nonetheless, attendees should plan on bringing both a pumpkin and a piece of cardboard for cardboard sledding from 11:30 a.m. to noon.

Uphill races were an option at the grand opening, but if snow remains, it will be canceled for safety concerns.

Weather will not tamper with hayrides, however.

Inside the Hopkins Shelter, Barb City Bagels will be selling food and beverages, and there will be a chance to make arts in crafts and win surprises, Bruggeman said.

This new sled hill will be a chance for the entire community to get outside during the winter, instead of being cooped up inside.

“Many parents have had that moment where they just need to get the kids out of the house and somewhere they can play,” Bruggeman said.

The project has been in the process since 2016, when the Water Reclamation District approached the DeKalb Park District in late 2016. The hill was completed in 2018, and the culmination will be tomorrow’s grand opening, Bruggeman said.

The DeKalb Park District is no stranger to organizing events that welcome new services for the community. “Anytime a new attraction, playground, park, or building is built, we work together to ensure a great product for the public,” Bruggeman said.

For this grand opening, Bruggeman hopes for lots of snow, despite it being October.

“The DeKalb Park District wants the sled hill to be just another way DeKalb plays,” he said.