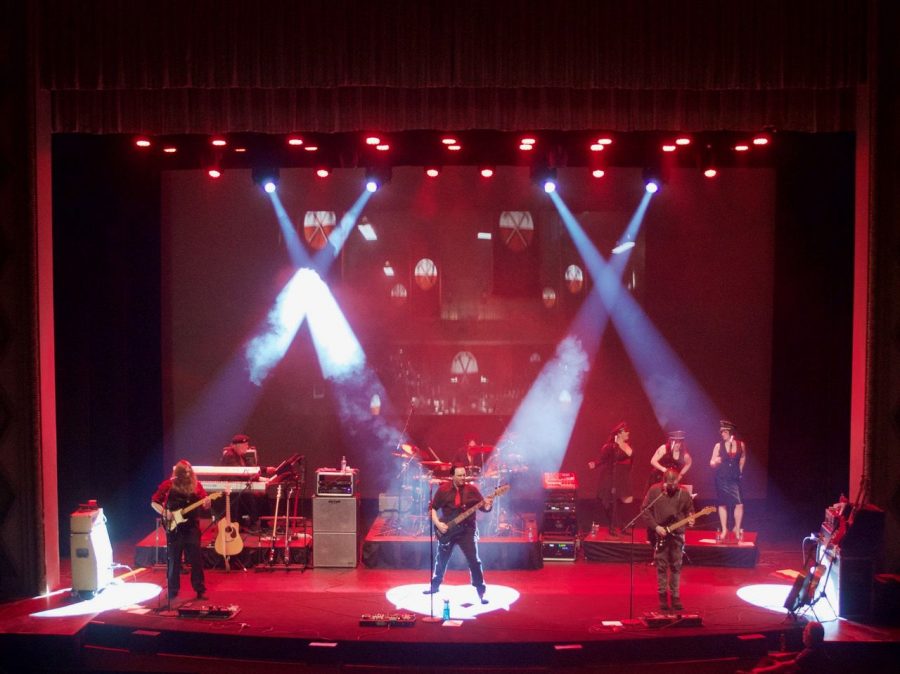 Think Floyd USA performs "In the Flesh" with the background filled with hammers.

DeKALB — One of the greatest albums of all time was brought to life by the band Think Floyd USA who used spectacular musicianship, a laser light show and on-stage animation to recreate the 1979 album “The Wall.”

The band didn’t hesitate to capture the audience’s attention by performing “The Wall.” The album tells the story of a musician named Pink who slowly goes insane by isolating himself from society with a metaphorical wall.

Think Floyd USA used a gigantic screen behind the performers to project patterns of color and light, as well as footage from the 1982 film “Pink Floyd: The Wall.”

The film, an adaptation of the album stars Bob Geldof as Pink and incorporates Gerald Scarfe’s mind-bending animation from the 1980 “The Wall” tour.

These visuals greatly aided the live performance by telling the story of the album and making the concert more of an experience.

Anyone can go to Spotify and play “The Wall,” but the visuals used by Think Floyd USA provided a musical environment not often seen.

The newest member of the group was Bunk whose Egyptian performance marked his third time playing with Think Floyd USA, JenDaPro said.

A standout of the performance was “Another Brick in the Wall Part 2” which saw the band and audience defying their psychopathic teachers and singing “we don’t need no education.”

“Goodbye Blue Sky” was also a great change of pace from the hard rock numbers by incorporating a more soft, acoustic style of playing.

The second half of the show was much more experimental with crazier imagery and setups including the song “Hey You,” which was performed with poetic flair.

To cut down on the film’s runtime, the song “Hey You” was omitted, but Think Floyd USA played the deleted footage alongside their rendition of the song, which greatly enhanced the track’s effect.

One of the finest moments of the evening was the performance of “Comfortably Numb” which saw Davies recreate Pink Floyd guitarist David Gilmour’s solos with ferocity.

The band perfectly balanced the soft moments of the track while also harnessing the intensity of other moments.

The rest of “The Wall” was pure insanity with hints of facism and madness as seen in songs like “In the Flesh,” “Waiting for the Worms” and “The Trial.”

Seeing Bob Geldof as Pink on the screen with his eyebrows shaved off and goose stepping hammers was perfection with the band capturing the spirit of the album. This included Davies dressed as Pink and JenDaPro, Von and Wol dressed as his disciples.

When “The Wall” was over, the band took a break for an intermission and the audience was left to contemplate the amazing performance they had witnessed.

When the band came back, they proceeded to play several more Pink Floyd tracks, including “Wish You Were Here,” “Echoes” and “Time.” These songs showed the band’s versatility and also displayed various flavors of Pink Floyd’s discography. One of the highlights of the second half of the show was when Think Floyd USA played “Astronomy Domine” from Pink Floyd’s first album “The Piper at the Gates of Dawn.”

The song was a great reminder that Pink Floyd wasn’t always a progressive rock group, but started in the realm of psychedelic music. Cosmic visuals were displayed on the screen and it made one feel like they were transported through the Stargate in “2001: A Space Odyssey.” The performance of the track concluded with Davies saying “Thank you Syd” in tribute to Pink Floyd member Syd Barrett, who passed away in 2006.

Two tracks, “Time” and “The Great Gig in the Sky,” from the classic album “The Dark Side of the Moon” were played along with “The Great Gig in the Sky” being one of the finest moments, thanks to excellent visuals and the vocal talent of Cheryl JenDaPro, who captured Clare Torry’s original vocals perfectly while making the performance her own. The way JenDaPro moved, it was almost as though she was being possessed by a musical apparition.

The light show was otherworldly and the screen had scenes from the film “The Wizard of Oz” playing, an obvious reference to the theory that “The Dark Side of the Moon” is a secret soundtrack to “The Wizard of Oz.”

The scene chosen was when Dorothy’s, played by Judy Garland, house was flung in the sky by a twister. These visuals made it apparent just how much Think Floyd USA truly respected Pink Floyd and understood their entire history.

When the show ended, it seemed as though it was too soon, until JenDaPro walked back on stage and introduced the band members one at a time. They proceeded to play the final song of the evening “Pigs (Three Different Ones)” from the 1977 album “Animals.”

The visuals used on the screen were that of the Battersea Power Station, which appears on the cover of “Animals,” with the animated pig Napoleon in the background from the 1954 film “Animal Farm,” which is fitting considering how the album “Animals” largely connects to “Animal Farm.”

The song was well played and the band’s chemistry was top notch. The harmonizing of the guitarists’ voices with the vocalists’ was perfectly complemented with the musicianship from the band.

From Stong’s keyboard playing to Buschner’s voice being distorted by a vocoder to JanDaPro playing the cowbell enough times to satisfy Christopher Walken, the song was a perfect ending to a magnificent tribute to Pink Floyd.

Think Floyd previously played at the Egyptian Theatre on Nov. 2, 2018 and had a completely different set list, including the entirety of “Animals” and “The Dark Side of the Moon,” which makes this most recent performance even more impressive.

Every time Think Floyd USA comes to DeKalb, they make each show different from the last which means if someone hasn’t seen Think Floyd USA recently, they haven’t seen them period.