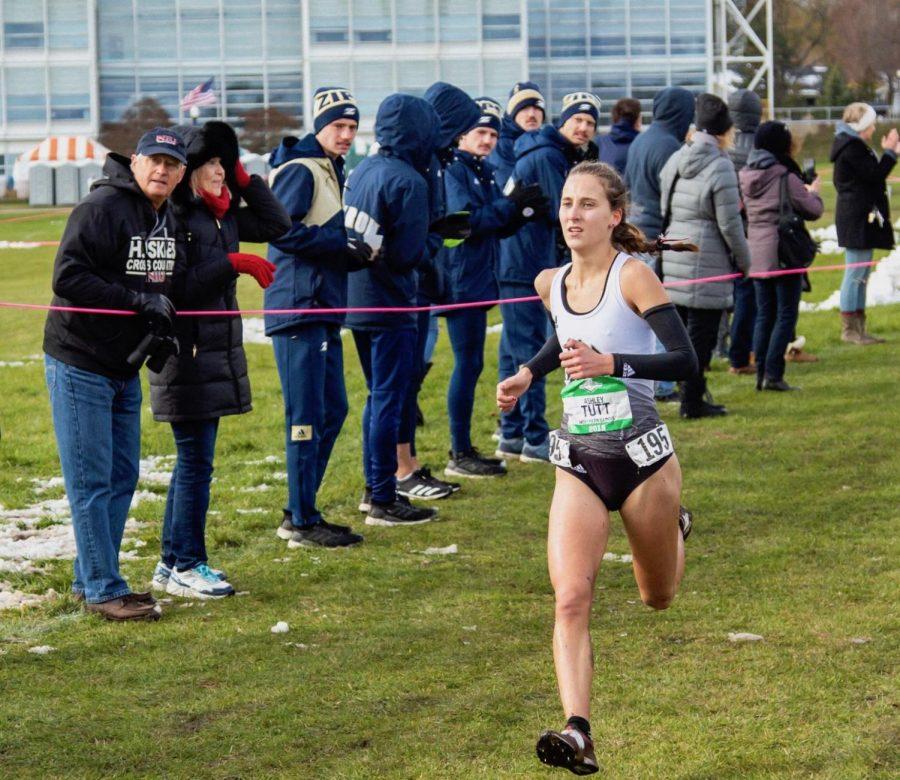 Then-junior Ashley Tutt inches her way to a first-place finish Nov. 2, 2019 during the 2019 Mid-American Conference Championships hosted by NIU at the North 40 course.

Nine seconds separated Ashley Tutt from All-American honors, a feat she set out to accomplish before her appearance at the 2019 NCAA Cross Country Championships.

The Huskie fell 10 spots short, yet she ran with all of her heart. Although missing her goal, Tutt has a lot to smile about.

“The national meet is where the elite compete,” Tutt said. “It was an amazing experience, and I’m glad I was able to be in it. I still see myself as an All-American.”

The junior Huskie raced against the best collegiate talent in the country, leaving behind 202 other runners on her way to posting a 20:57.5 time and 50th place in the 6000-meter race — the best finish of any runner representing any Illinois college in Saturday’s Division 1 race.

It wasn’t all clear skies and smooth paths for Tutt. The Huskie stumbled prior the 4000-meter mark, but powered her way 11 positions forward en route to the best finish by any Huskie runner in the national championships.

“I fell right before the mile mark of the race and got pushed around a bit,” Tutt said. “I was happy with how I bounced back from that. I could have let it define my race, but I knew I still had a chance. I had to keep fighting.”

Tutt’s performance was an accumulation of seven races this season, her most since arriving at NIU from Minooka Community High School. The 2019 Mid-American Champion was one of two MAC athletes in the race. Senior Natalie Cizmas from Eastern Michigan University also represented the conference, finishing in 88th place.

“Every time I put on my jersey, I cherish the moment and want to make the most of it,” the Huskie said. “While it was an excellent showing, I still came up a little short. Makes me want to go out there again and hurt again.”

Through a rush emotions and the bliss of running in the national race, the Huskie was grateful for the support cheering on from the sides. Tutt’s family was present at the race; they’ve never missed a race, the Huskie said.

Yet the MAC Champion said she was most encouraged by a group of people in particular — her teammates. Running as an individual, Tutt said seeingher fellow Huskies cheering on helped her push through the race.

One last person the Huskie wanted to thank was her coach, Head Coach Adrian Myers. After she picked up an ankle injury during the spring, Tutt struggled with keeping a positive mindset, but Myers kept her grounded and reminded the junior how good of a runner she was.

“I could not be more grateful to have such a great coach,” Tutt said. “He is always my number one fan, and that is why I will always say I have the pleasure of running for NIU cross country. I get to live my dream everyday doing what I love.”