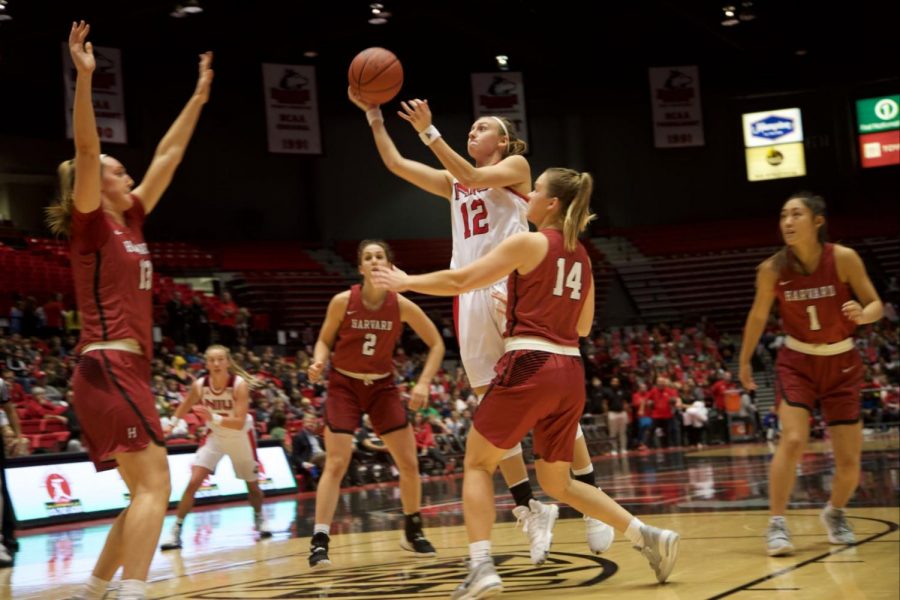 Junior forward Riley Blackwell reaches for a layup Nov. 5 during NIU’s home loss to Harvard University at the Convocation Center.

DeKALB — Just after an NIU timeout with three seconds left on the clock, junior guard Gabby Nikitinaite put on the hero’s cape and banked in her layup.

That layup ultimately pushed the game into overtime Sunday, and the women’s basketball team showed off its never-say-never attitude in its 74-68 comeback victory against the North Dakota State University Bison.

Coming into this game, NIU had a rough time scoring in its home opener Nov. 5 against Harvard University at the Convocation Center.

In the game against Harvard, NIU shot an abysmal 22.1% from the field and 20.6% from three point territory. The Huskies shot the ball a lot better in their second game, posting a shooting percentage of 41.3%.

“We were not necessary fluent on the offensive end in the first half,” Head Coach Lisa Carlsen said. “We did not have great flow, but defensively [we were] fairly solid throughout the game. We did not take the lead until overtime, so it was one of those ‘grind it out find a way to get it done’ type of games.”

NDSU got off to a quick start in the first quarter, scoring the first seven points of the game, led by junior guard Michelle Gaislerova with five points. NIU did not have similar success to start the game as it went two for five in the first four minutes of the game.

Both teams struggled offensively, as they combined for only 20 points on nine of 35 attempts. NDSU took a 27-24 lead into halftime, led by Gaislervora with 12 points and two rebounds. NIU’s top performer in the first half was redshirt senior forward Courtney Woods with seven points, including making five of six free throws.

NDSU extended its lead to nine points 42-33 after a three pointer from first-year guard Ryan Cobbins midway through the third quarter. NIU was able to cut the deficit to 47-43 late in the third.

The fourth quarter was the turning point for the Huskies as they glistened on both sides of the ball. NIU shot 46.2% from the field, and its defense forced NDSU into seven turnovers. Nikitinaite and junior forward Riley Blackwell led the way for NIU with seven points each.

The Bison went stride for stride with NIU at the start of the fourth quarter, shooting 50% from the field. Then, as the quarter went on, the Bison began to struggle and went scoreless in the last four minutes of the quarter.

NIU tied the game 64-64 in the fourth quarter with Nikitinaite’s late heroics to force overtime play.

NIU’s momentum carried into overtime, outscoring the Bison 10-4. The Huskies went on to win the game 74-68. Woods finished the game as the leading scorer for NIU with 20 points and executed 11 of 12 free throw attempts.

NIU’s next game is 1 p.m. Sunday in Fort Collins, Colorado against the Colorado State University Rams.