Huskies take break to ramp up intensity in preparation for Toledo 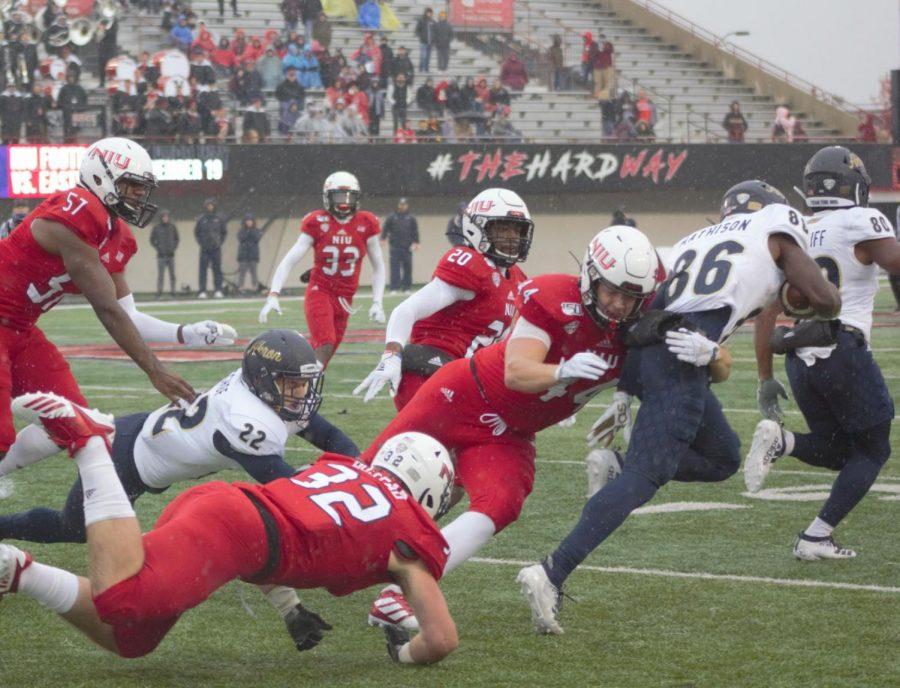 DeKALB — The football team is trying to make the most of its three additional days of preparation for the Wednesday night road matchup against the University of Toledo Rockets.

Head Coach Thomas Hammock said he wasn’t prepared for the physicality of Central Michigan University when NIU lost 48-10 to the Chippewas, using it as a teaching tool for himself and for the team.

“They played physical, and they knocked us back,” Hammock said. “I wish I could say I saw that coming, but I didn’t, and it’s something we learned from. We’ve been able to have some physical practices the last couple of days, and it’s been good.”

Preparation was nearly non-existent for senior quarterback Ross Bowers, who was cleared from concussion protocol only a day before the contest and subsequently threw three interceptions against the Chippewas.

Hammock said Bowers had returned to form in practice after being sidelined for two weeks following the head injury Oct. 19 against Miami University–Ohio.

“That was a tough situation with him not being able to practice until Friday,” Hammock said. “It’s been good for him to just practice after being out for two weeks.”

The loss to CMU has led to more physical practices for the Huskies before their game Wednesday. First-year linebacker Nick Rattin said the players are putting out more energy in practice now than they were before the blowout defeat.

“The last few days of practice have been good for us because there’s been a lot of intensity and it’s really competitive,” Rattin said.

Entering the last quarter of their regular season, the Huskies need to win out to reach 6-6, become bowl eligible and have any hopes of a Mid-American Conference title. The Rockets post a 6-3 record, including a 3-2 record against MAC opponents.

The rushing offense for Toledo is the best in the conference, with the team averaging 250 rushing yards a game. Sophomore running back Bryant Koback already has 1,052 rushing yards on the season, including a pair of games when he rushed for more than 200 yards.

On the defensive side, Toledo has allowed more passing yards than any team in the MAC and the second-most offensive yards. In their last meeting Nov. 7, the Huskies rushed for 296 yards as a team against the Rockets.

Hammock maintains that despite the weaknesses of the Rockets, NIU needs to focus on meeting its own strengths first.

“We’re going to try to be balanced,” Hammock said. “For us, you don’t go into a game saying you want to do this or that. We want to try and run our offense and give our playmakers a chance to make plays.”

NIU faces Toledo at Glass Bowl Stadium in Toledo, Ohio, where the Rockets have yet to lose this season. In its final road game of the season, NIU hopes to pick up only its second win this season as a visitor.

Kickoff is scheduled for 7 p.m. Wednesday and will be broadcast live on ESPN2.