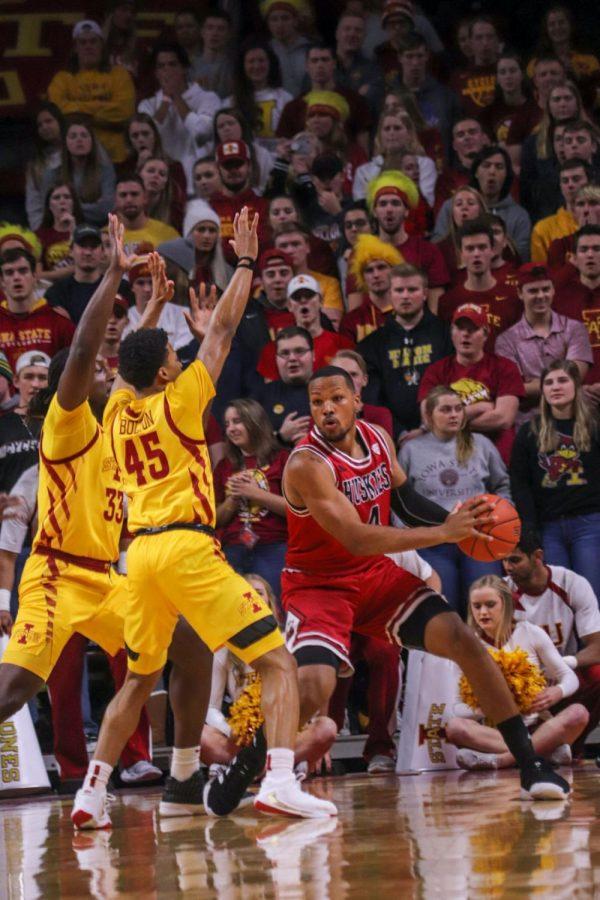 DeKALB — Tuesday Night the Huskies headed to the Hilton Coliseum in Ames, Iowa, looking to beat Iowa State University for the first time since 1971.

That elusive win is going to have to wait for another season as a three-point Huskie halftime lead quickly evaporated in the second half, and Iowa State rolled to a 70-52 win in men’s basketball action.

Things looked good in the first half for the Huskies, who are now 0-2 on the season. With 17 first-half points from senior guard Eugene German, NIU led wire-to-wire in the first 20 minutes. The Huskies then took their largest lead, 26-15, with a three-point shot by junior guard Rod Henry-Hayes with 7:22 to go in the half.

Behind 44% shooting and eight offensive rebounds creating 10 second-chance points, the Huskies eventually settled for a 34-31 advantage before the break.

The wheels came off quickly in the second half, as NIU managed just three field goals in the first 12 minutes of the second half. The Cyclones, meanwhile, erupted for 28 points in that span and eventually stretched the lead as high as 23 points with 55 seconds to go in the game.

“We won every four-minute segment in the first half,” Head Coach Mark Montgomery said in an athletics department news release. “[In the second half] they scored the first four or six points, and we had to call a quick timeout. We had a great game plan, but [in the second half] sometimes we didn’t get the rebound, or we made a bad decision on offense, and Iowa State was out and running.”

The Huskies shot just 6-for-33 in the second half, tallying 18 points and committed 20 turnovers in the contest.

German led the Huskies with a game-high 24 points, while sophomore guard Rasir Bolton paced the Cyclones, who improved to 2-1 on the season, with 17 points.

The Huskies return home 6 p.m. Friday at the Convocation Center when they meet Coppin State University to kick off the Collegiate Hoops Roadshow.