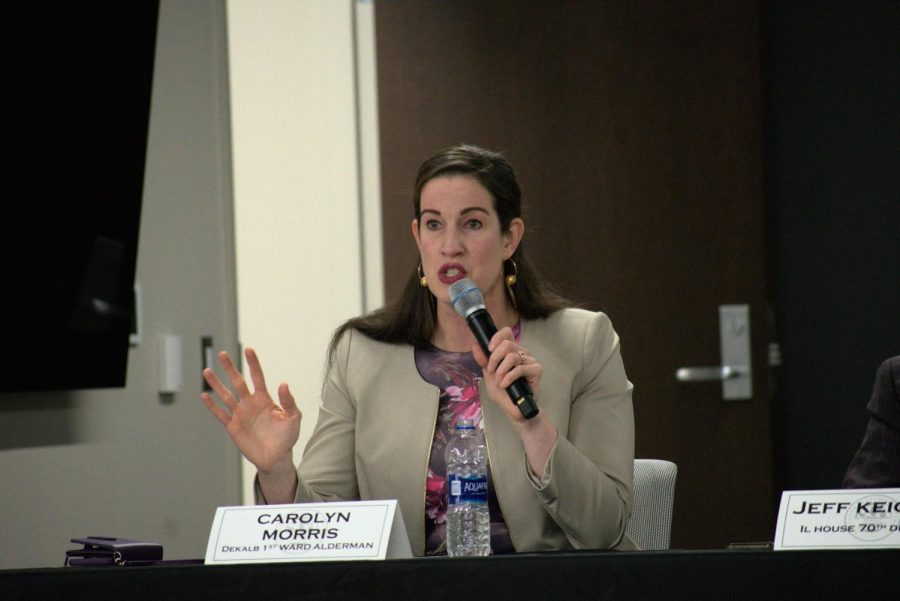 DeKALB — In America, anyone can run for public office, regardless of political background. What is required is the commitment to making a difference, local government leaders said.

Four local elected officials offered insight into pursuing a career in public service and how to get involved politically at a public speaking event titled “Up Close and Personal: Life & Local Government” held 5:30 p.m. Wednesday at the Holmes Student Center, OASIS Commons.

The panel of speakers at the event consisted of State Rep. Jeff Keicher, of the 70th District, First ward alderperson Carolyn Morris and DeKalb County Board members Rukisha Crawford and Scott Campbell.

Bradley Beyer, chairperson of the SGA Senate’s University Services Oversight committee, organized and moderated the event, which was a joint effort between the SGA and Military and Post-Traditional Student Services.

“I wanted to put an event together as a way to have students come in and be able to ask a local panel of local elected officials questions about their career, and get advice about what you guys should do as an NIU student if you’re looking to get involved,” Beyer said.

Morris said she was inspired to join the U.S. Marine Corps after 9/11, which happened during her first week of college. She went on to spend 11 years on active duty.

Morris said her greatest moment of inspiration to hold public office came when President Donald Trump won the presidency in 2016. She and her family had moved to DeKalb about a year prior, she said.

Keicher said he developed his leadership skills serving as the president of multiple organizations, and once former State Rep. Bob Pritchard resigned from his post in July 2018, Keicher decided the time was right to step up.

Crawford said her motivation to run for public office was driven by her aim to represent the diversity of DeKalb County.

“Once I got elected for DeKalb County Board, I was the first African American woman that sits on that board,” she said. “What made me decide it was time for change was because not enough diversity was being shown in the community.”

Campbell, who teaches science courses at Rochelle Township High School, said he noticed wide achievement gaps between white students and students of color within public education, which inspired him to make a change.

“Just about every divide you can imagine is magnified in public education,” he said. “That got me angry, and anger, for me, means motivation. So I started working on school board elections.”

All of the panelists encouraged civic engagement, whether by means of voting, interacting with others about politics, advocating for change, working on campaigns or attending local government meetings.

“You need to be civically engaged because if you don’t, rich old white guys like me will determine your future,” Campbell said. “If [your age group] turned out to the 2016 presidential election at the same ratio that my age group [45 to 64] turned out to the 2016 presidential election, I would have been completely irrelevant; my vote would not have mattered.”

Keicher instructed the audience to open the battery setting on their iPhones and check the average activity for the last 10 days. This was meant to demonstrate how people should be spending more time engaging in politics in a physical space, not a digital one.

Crawford added that change comes easier when people come together, while silence on an issue implies complacency.

“When you go out, advocate for what you believe in all the time,” she said. “Don’t just stand there and see it happen. If you’re seeing it happen, then you’re of the problem. You’re either part of the problem, or you’re part of the solution. Choose one.”