Marchers protest sexual violence at Take Back the Night 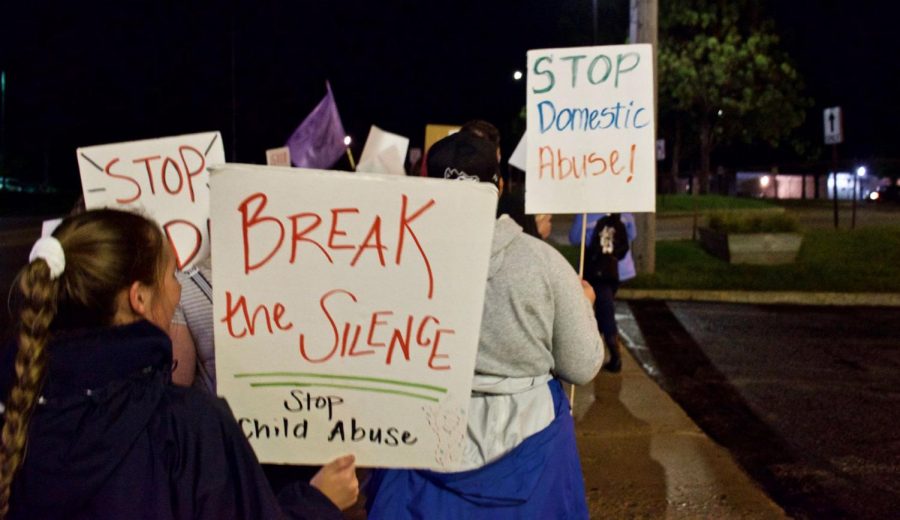 Students marching and holding signs around campus Thursday night during Take Back Night.

DeKALB — The dark skies and rain did not stop the annual Take Back the Night march 7 to 9:30 p.m. Thursday at the MLK Commons. The event aimed to increase awareness about sexual assault and violence as well as to offer support to survivors.

There were a few dozen students, faculty and community members in attendance.

Around 7:15 p.m., Olivia Portnov, senior communicative disorders major and president of the Women and Gender Advocacy Alliance, began Take Back the Night by thanking her sorority, the Gender and Sexuality Resource Center, Safe Passage, Prism and other student supporters for being involved.

“We need to acknowledge that this is such a vulnerable state to willingly emerge yourself in, and we want to thank you for sharing that vulnerability with each other,” Victoria Andrzejewski, vice president of Women and Gender Advocacy Alliance, said. “The presence of everyone was a symbol of unbelievable strength — whether that strength comes from a personal experience, supportive space or like-minded individuals.”

Testimonies of students’ past trauma encouraged others to share their stories.

“Seeing everyone here made me feel that we can start having [a] better conversation around sexual assault and violence,” Trevon Smith, sophomore math education major and president of Prism, said.

Karli Johnson, NIU alumna, returned to Take Back the Night for the ninth time. Johnson gave a speech about sexual abuse.

“We want to give a voice to those [who] had their power taken away from them, and by doing this event, maybe we can give some of that power back,” Portnov said. “It is important that we identify these abusers and silence them.”

Students held signs, and the march started around 8 p.m. at the MLK Commons. Marches went to Normal Road, down Lincoln Highway to Annie Glidden Road, then to Lucinda Avenue and down Stadium Drive to Lincoln Drive, ending at the East Lagoon.

During the march, there were loud chants of, “Not the church! Not the state! Women must control our fate!” and “Take a stand, take back the night!”

A few cars honked in support of the marchers.

At the end, everyone settled at the East Lagoon to play games and roast marshmallows.