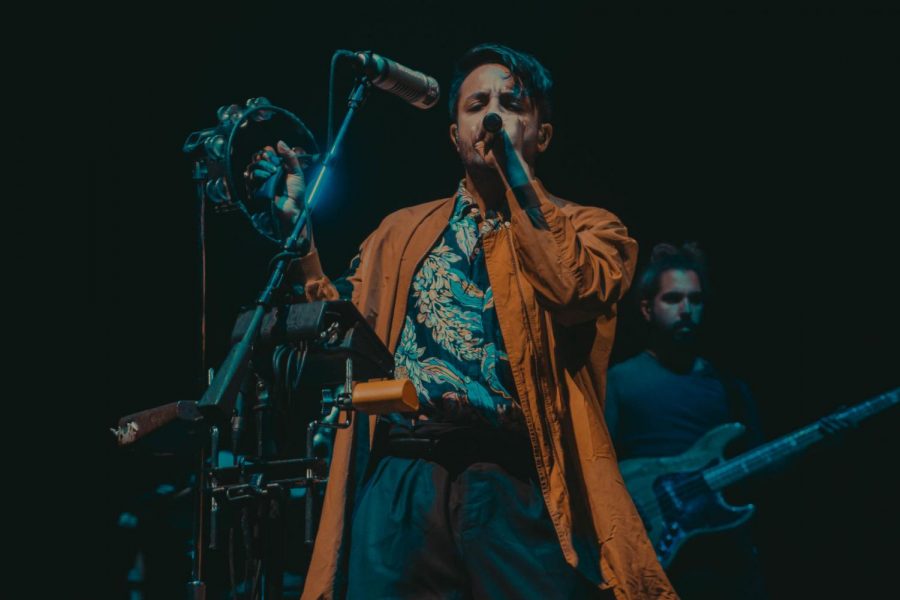 Young the Giant frontman Sameer Gadhia performs before a crowd Friday at the Convocation Center. Young the Giant performed as part of NIU's Homecoming events.

DeKALB – Alternative rock band Young the Giant pulled students into its music with uplifting and introspective tracks Friday at the Convocation Center. Many tracks were from the band’s 2018 album “Mirror Master,” and the group cemented the meaning of the lyrics using lights and colors.

Indie rapper Badchild opened Young the Giant, giving the crowd a tasteful, angst-filled indie performance before Young the Giant’s alternative sound. The young artist flooded the room with echoing vocals from the depths of his throat.

The drummer, despite being behind Badchild, managed to attract some attention with his vicious head bumping. At one point, the drummer even hit his head with his fists, feeling the music he was producing.

Following Young the Giant’s opening song “Oblivion,” the band performed “Something to Believe In” from their previous album, “Home of the Strange,” released in 2016. Lead singer Sameer Gadhia owned the stage, swaying to the music and pounding his tambourine against his chest as he sang passionately into the microphone. The whole crowd went into an uproar.

The band played another old track from “Home of the Strange” after they introduced themselves.

By beginning the concert with familiar songs, the band connected with the audience, pulling in fans from the beginning of their musical journey and their current path.

“How are you doing this evening?” Gadhia said as the band played older tracks. “Nice to see you here. We’re going to take it back, little old school for a sec, if you don’t mind.”

Dancing to the beat, Gadhia’s fashionable long yellow coat followed his steps and the movement of his body for the performance of the song “Apartment.”

The spotlight above the band painted the wall behind it in dancing yellow lights. The repetition of the color yellow on the stage united the lead singer and the song.

Throughout the entire show, the texture of the lights and their colors varied from song to song.

The band’s eighth song of the night, “Amerika,” featured dotted lights and the colors of the American flag projecting on the audience member’s faces.

The album concept for “Mirror Master” joins the emotions Americans experienced after the 2016 election, following “Home of the Strange,” which explored band members’ experiences as immigrants or first-generation Americans, according to the band’s website.

This performance and the fitting light choices mirrored the concept of the album.

The real magic began with the encore when Gadhia stepped onto the stage for another round, kicking off with the band’s hit song “Superposition.”

Since the album release, the band’s single “Superposition” has reached No.2 on the Billboard chart for Alternative Songs, staying on the chart for 26 weeks, according to Billboard.

Gadhia came out in a glittery blue cloak for this song, hood up and head down with his side facing the crowd. Once the beat dropped, so did the hood.

“I want you to want me,” Gadhia sang, as his sequined cloak grabbed the eyes and attention of fans.

Shortly after finishing the encore, the band told the audience to have a good night and tossed the drummer’s drumsticks to a couple of lucky audience members so they could leave with a piece of the performance.

The vibrancy of the concert and lyrics were strong enough to stick with everyone long after the show’s end.