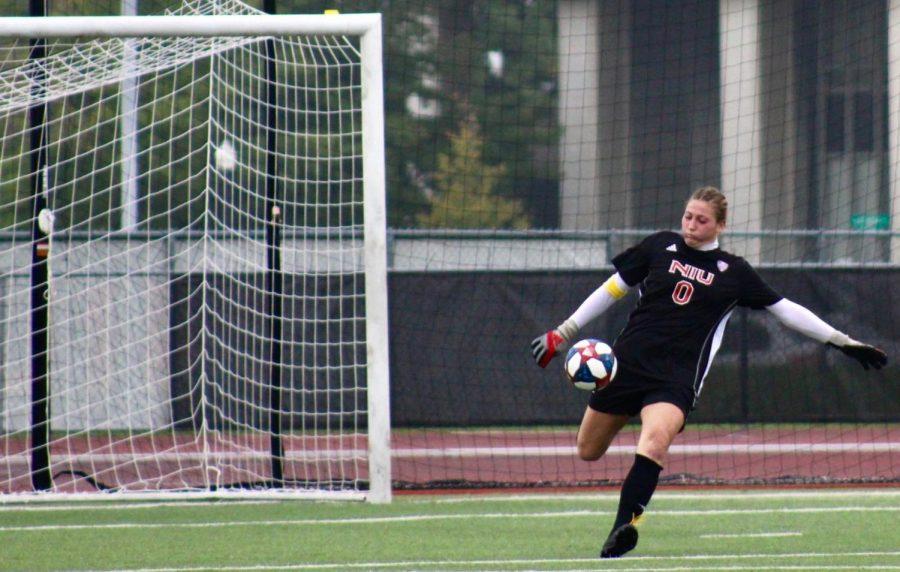 Then-junior goalkeeper Megan Donnally swings her leg on a punt Sept. 29, 2019, during an eventual 1-0 loss to Kent State University at the Soccer and Track and Field Complex in DeKalb.

DeKALB — Junior goalkeeper Megan Donnally had 13 saves on the day for NIU. The 13 saves are a season-high for Donnally, and ties an NIU career-high.

Women’s soccer fought hard all game, but gave up a goal late in the second half, falling to Ball State University 1-0. It is the team’s fifth straight loss in Mid-American Conference play.

Donnally did everything she could to make sure her team stayed in the game so they could take an advantage.

“[Donnally] had a very good game today,” Head Coach Julie Colhoff said. “She came up with some big stops that we needed, and she also did a good job making the routine ones.”

Despite the great performance from Donnally, Colhoff credits giving up the lone goal to the team’s lack of discipline on defense during the play, where they should’ve jammed the runner and got the block.

In the first half, the Huskies faced an onslaught of shots from the Cardinals, with BSU attempting 12 shots, seven being on goal. The Huskies only managed one shot on frame.

“We had too many unforced turnovers that didn’t allow us to build into the attack as much as we should’ve been able to,” Colhoff said.

Donnally was tested early in the match with two saves in two minutes. In the eighth minute, BSU senior midfielder Julia Elvbo got the first shot on goal for the Cardinals which was followed by a shot from senior forward Kambol.

Donnally went on to block six more shots before the half including a save against BSU junior midfielder Nicky Potts seconds before the final whistle. Donnally held BSU scoreless in the first half, making this the fourth match of the season in which the Huskies do not concede in the first half.

In the 48th minute, Kambol had the first shot on goal for the Cardinals in the second half, but Donnally was there to make an acrobatic stop. Kambol’s shot was steering toward the left upper-90, but Donnally pushed the shot away with a right-hand block.

In the 82nd minute, BSU sophomore defender Lexy Smith attempted a shot, but Donnally was there to make the save, picking up her 11th save.

In the 83rd minute, Potts sent a shot to the lower left side, scoring a goal and putting the Cardinals up 1-0 over the Huskies late in the second half. Elvbo was credited with the assist.

The Huskies tried, but were unable to close the gap, failing to score in the final seven minutes of the game, giving the Cardinals the 1-0 win.

With the loss, women’s soccer falls to 2-9-1, 0-5 in MAC play, with six games left in the regular season. NIU was only able to attempt two shots, one being on goal. BSU attempted 31 shots, 14 being on goal.

NIU will return to the field at 2 p.m. Sunday against Miami University – Ohio at the NIU Soccer and Track and Field Complex in DeKalb.