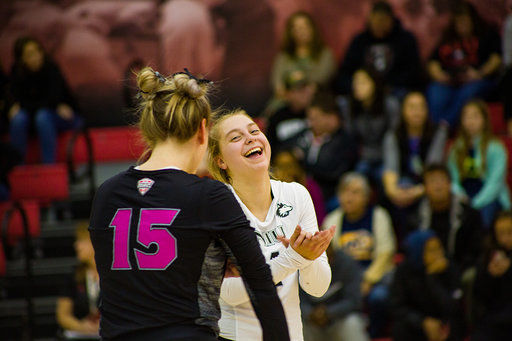 DeKALB — Kaitlyn Bell, first year outside hitter, anchored the Huskies’ offense Friday in a 3-1 victory over Kent State University at Victor E. Court. Friday kicked off one of two Homecoming matches for NIU.

Kent State came out very aggressive in the first set, gaining an 8-3 advantage early. NIU edged closer late in the set, after a monster block by first-year outside hitter Peyton Tilly and sophomore middle blocker Jasmine Kemp, making it 18-16.

NIU completed the comeback, winning the first set 26-24 and taking a 1-0 set advantage in the match. Bell led the way with 8 kills and a hitting percentage of .800%

Head coach Ray Gooden talked about Bell’s huge performance throughout the game and believes more players can play at a high level.

“Everybody on our team is capable [of performing well],” Gooden said. “It’s not going to be one single person a night. [Bell’s] success comes from good first contact from our back row players or [sophomore setter Grace Balensiefer] delivering a ball, so [Bell] can do some good things.”

NIU could not carry over the momentum gained in the first set as Kent State took a 15-7 lead into the media time out. The Golden Flashes extended their lead to 20-12 after a kill by Danie Tyson.

Kent State went on to win the second set 25-19 and tie the match at 1-1 heading into intermission. Morgan Kopley led the way for the Golden Flashes with seven kills in the set, while Tilly and senior middle blocker Brinley Milbrath led the way for NIU with two kills each.

Both teams’ aggressive play continued in the third set as both teams had hitting percentages well over .300%. NIU took the set 25-19, after a 11-6 scoring run started by a service ace by senior setter Amanda Krahl. Kent State’s top performer was Ashley Makruski with five kills and setter Alex Hafner with to assist.

“I thought we played with some good energy and I thought we did a lot of good team things, like being able to communicate with each other and stay together through tough moments,” Gooden said.

The Huskies will be back on the court 7:30 p.m. Friday against Ohio University at Victor E. Court.