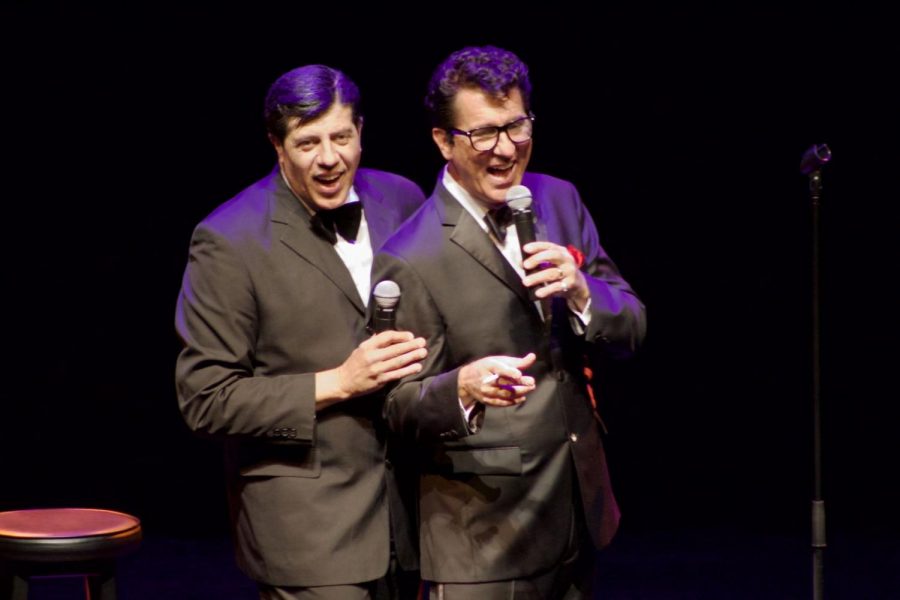 The show started with a musical number sung by Dean Martin, played by Tom Stevens, and Jerry Lewis, played by Tony Lewis. “Almost Like Being In Love” was the opening song and took the audience back in time to the 1950s.

“There’s a smile on my face, for the whole human race. Why it’s almost like being in love,” Stevens and Lewis sang as Stevens charmed the audience with his smooth movement and suave voice while Lewis added comedic charm to the number.

What was so amazing about the performance was the uncanny resemblance between Stevens and Martin and Tony and Jerry. “Well just look at us. We were born for it” Stevens said as he reflected on why he and Lewis chose to play the famous duo. “The career chose us,” Lewis said.

Not only did the pair look like Martin and Lewis, they sounded like them too. Stevens’ voice was fantastic and brought to life the amazing tracks Martin recorded. Tony also captured Jerry’s nasally voice in a way that made every joke 10 times more funny.

While Stevens and Lewis had a distinct niche, Stevens singing songs and Lewis telling jokes, that didn’t stop the pair from crossing over and doing other forms of entertainment. Stevens told several funny jokes, including a story about a woman losing her glass eye and Dean Martin returning her eye. These setups were creative and funny as can be. It also made the show refreshing to see Stevens switching up his style of showmanship.

Lewis also ventured into singing and did a fine job. He emulated the early comedic work of Jerry Lewis where Jerry would mime funny actions to music, in one case pretending to spastically type to the sound of stringed instruments and bells. Another funny moment saw Stevens singing “Sway” and Lewis arriving on stage with maracas and dancing to the rhythm of the song.

Lewis’s pants comedically dropped to his ankles revealing boxer shorts much to Steven’s dismay. “It’s a good thing Jerry wore the boxer shorts,” Stevens said. “As for the people in the front row, not only did you see Jerry’s maracas, you saw his castanets.”

This kind of humor came out of nowhere and induced laughing beyond comprehension. The chemistry the pair shared with each other was consistently heartwarming start to finish. Stevens acted as the straight-man with his touches of goofiness trying to entertain the audience while Lewis tried to liven up the crowd with word-play and humor. The pair had their comedic spats here and there but their relationship was similar to two brothers. They may fight, but in they end, they still care for each other.

Much of the humor was very clean, but occasionally got risque with double-entendres here and there.

The closest the show got to questionable material was when Lewis dressed as a Chinese Chef named Lou. While some may have considered this part of the show insensitive, it’s important to remember that this is a tribute show to an act from the 1940s and 50s. Some of the material that was popular then may not be as popular now, and that’s okay. However, to discard some of Martin and Lewis’s material would make the show less authentic and Tom Stevens and Tony Lewis are absolutely dedicated to the legacy of Dean Martin and Jerry Lewis.

Despite this controversial act, it was relatively harmless with some funny jokes

This is Tony’s 34th year playing Jerry Lewis and Stevens’ 35th year, and it truly shows as they are so in touch with their roles. Stevens practically oozed the charismatic demeanor of Dean Martin and, from the instant he came on stage, could easily contend with Marlon Brando or James Dean for the “coolest cat” award.

Tony was magnetic with his goofy, yet lovable persona as Jerry Lewis. The pair have a great working relationship both on and off the stage, and it shows.

The duo also paid tribute to the films of Dean Martin and Jerry Lewis. One of the show’s highlights was when the duo impersonated celebrities thanks to the mind altering, scientific formulas of “The Nutty Professor” played by Tony Lewis. One vial managed to give Stevens a “sexy” Greek accent which was so seductive that Lewis tried to make a move on him. This was an incredible bit of humor that perfectly incorporated the solo work of Martin and Lewis into their show.

The final vials transformed the pair into celebrities. Stevens was transformed into Robert De Niro while Lewis was John Travolta. “De Niro” did a tough guy bit incorporating elements of “The Godfather Part II” and “Taxi Driver” while “Travolta” danced in a suggestive way to the disco track “You Should Be Dancing” by the Bee Gees.

One of the final acts of the show was when the pair paid homage to the film “The Caddy,” which starred Dean Martin and Jerry Lewis, by singing the film’s hit song “That’s Amore.”

The song was sung as a duet with Stevens’ suave voice being perfectly offset by Lewis’comedic voice. The song perfectly summed up the pair’s relationship, with each having their own strengths and coming together to form something bigger than themselves. While individually they work as entertainers, the pair ascend to another plane when they join forces.

“Just look at all the people who were in the lobby,” Stevens said as he discussed what the best part of the show was. After the show concluded, Stevens and Lewis met everyone who attended in the lobby in the Egyptian Theatre where they received hugs and well wishes from the audience which shows just how powerful their performance truly was.