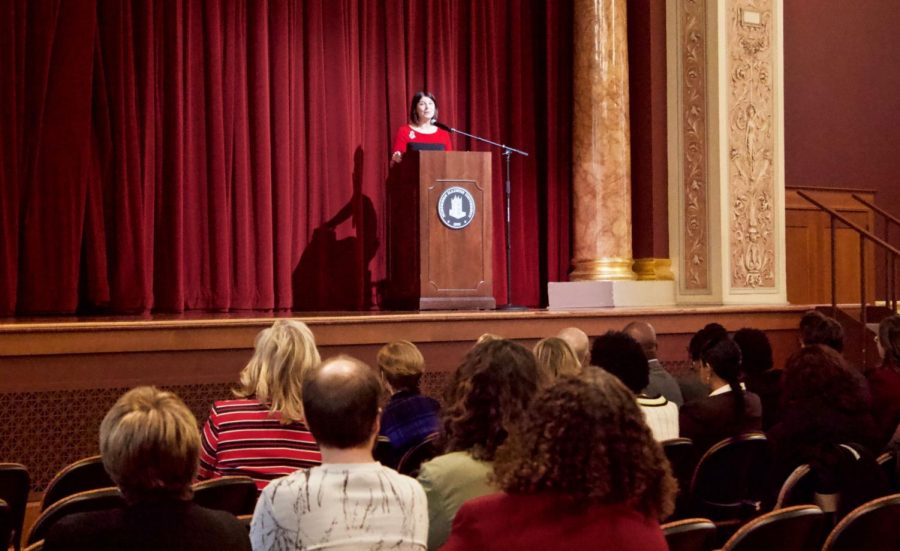 Huskie Pledge is set to launch for the fall 2020 semester and will provide qualifying Illinois residents with a grant that covers their first year’s full tuition, Freeman said.

To be eligible for this grant, the applicant must have graduated from high school during the 2019-20 school year, enroll full time as a freshman, have a 3.0 cumulative GPA or higher and have an annual household income of $75,000 or less, according to a news release.

Huskie Pledge will also be made renewable for up to four additional school years if income, full-time enrollment and university GPA criteria continue to be met, the release says.

“Whether a student comes from a single-parent home, a dual-income family or if they are undocumented,” Freeman said, “Huskie Pledge reflects our continued commitment to reducing barriers, creating opportunities and investing where we can make a difference.”

The funding for this program is limited, and students are advised to apply to NIU and file a FAFSA or Illinois RISE Act application by Feb. 1, according to the release.

Freeman went on to discuss some of the recent developments NIU has made in expanding programs and academic opportunities for students.

One of these developments is the Illinois Board of Higher Education’s approval of three doctorate programs in electrical, industrial and systems and mechanical engineering. Each program will offer an industry fellowship, Freeman said.

More than 15 departments are reportedly collaborating on the development of the Northern Illinois Center for Community Sustainability, which Freeman said will “emphasize food systems innovation, water resources management and ecosystems sustainability.”

NICCS is part of the Illinois Innovation Network, and will be housed in a $22.9 million facility on NIU’s far west campus, according to NICCS’ website.

Freeman also said the Center for Black Studies is teaming up with Clemson University to start a new study abroad program that allows NIU students the opportunity to study in the countries of Ghana and Barbados as well as the state of South Carolina.

“The experience will deepen their understanding of the origins of the transatlantic slave trade system, the forced enslavement of Africans and the lasting impact of this system on our society,” she said.

In addition, Freeman said NIU has joined the Partnership for College Completion’s Illinois Equity in Attainment Initiative, or ILEA, and the Association of Public and Land-grant Universities’ Powered by Publics, two academic initiatives in which universities collaborate to increase student equity and graduation rates.

The ILEA urges universities’ commitment to eliminating racial and socioeconomic achievement gaps by 2025, and has 29 members including NIU, according to the PCC’s website.

Powered by Publics works to expand college access and award hundreds of thousands more degrees by 2025, and has 130 members including NIU, according to the APLU’s website.

Freeman announced another program in her address called Huskies Give Back, which she said aims to provide full-time NIU employees with one paid day to volunteer at a charitable organization, such as a food pantry or animal shelter, and will be unveiled in January.

“Huskies are a community who care,” she said. “And I want to continue to foster that as a university.”

Freeman also discussed two key points from the $300,000 grant NIU’s Office of Academic Diversity, Equity and Inclusion earned from the U.S. Department of Justice. This grant is for reducing sexual violence and improving services to victims of stalking and domestic and dating violence, according to a Sept. 19, 2018, NIU Today article.

The first point is building a stronger partnership with Safe Passage, a DeKalb-based nonprofit that aims to reduce and prevent domestic and sexual violence, and the second point is developing more inclusive programs to represent all demographics.

“Successful prevention and advocacy cannot be a one-size-fits-all approach,” Freeman said. “We have to be more mindful of survivors who come from different cultures, racially diverse communities and who identify as LGBTQ+, have a disability, have English not as their first language. We need to offer them information, resources and services that meet their needs.”