‘Joker’ creates a narrative worthy of the Clown Prince of Crime 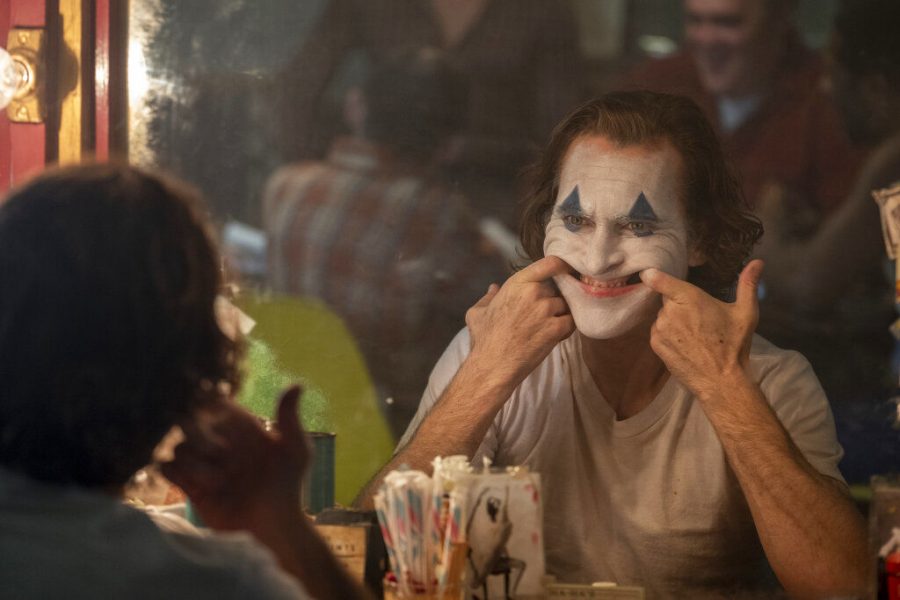 Arthur Fleck, played by Joaquin Phoenix, tries to "put on a happy face" in "Joker."

“Joker,” while controversial and violent, is easily one of the best films of 2019 due to its complex character development, strong atmosphere and beautiful filmmaking techniques.

Rather than being part of a larger cinematic universe with a budget of hundreds of millions of dollars, “Joker” takes the comic book film into more grounded territory after being released on Friday.

“Joker” tells the story of Arthur Fleck, played by Joaquin Phoenix. Fleck is a mentally ill stand-up comedian living in Gotham City in 1981 with his sick mother, played by Frances Conroy.

Arthur spends his days seeing a psychologist, watching The Murray Franklin Show and working as a party clown-for-hire in a city that ignores his pleas for help.

When Arthur is pushed to his breaking point, he turns to violence in the form of The Clown Prince of Crime: The Joker.

The Joker is the greatest comic book villain made and many actors, including Mark Hamill, Jack Nicholson and the late Heath Ledger, have donned the clown makeup.

However, Phoenix creates a unique version of The Joker. Rather than looking at past versions of the character in film and comics, Phoenix read books about political assassins to understand killers, according to  an Aug. 31 Variety article.

While some may try to compare Phoenix’s performance to past versions of The Joker, his take is so unique that it is futile to compare the role to Ledger’s or Nicholson’s portrayal.

Phoenix’s performance is masterful and captivates viewers from beginning to end. The film acts as a character study, examining the mental deterioration of the protagonist and his environment.

One of the creepiest aspects of the character is his laugh. Arthur has a neurological condition that makes him laugh when he feels uncomfortable, a horrific cackle which sounds like it actually hurts Phoenix.

In preparation for the role, Phoenix lost 52 pounds, according to the Los Angeles Times, and his emaciated form is uncomfortable to look at.

While the film focuses mainly on Arthur, there are a few supporting performances that stand out, including Robert De Niro, who plays talk show host Murray Franklin.

De Niro’s role, obviously an homage to the character Rupert Pupkin in “The King of Comedy,” is not only enjoyable to witness but also leads to Arthur’s downfall.

De Niro is funny as a talk show host and could honestly contend with real hosts Jimmy Fallon and Conan O’Brien.

While director Todd Philips is best known for directing “The Hangover” trilogy, one would have never guessed based on his direction of “Joker.” The cinematography, thanks to frequent Phillips collaborator Lawrence Sher, is masterful. The film uses techniques to display Arthur’s isolation including long shots showing how small and alone Arthur is in the grim world of Gotham City.

Hildur Guðnadóttir’s score is one of the film’s biggest assets. The music of the film is mainly led by lower pitched stringed instruments, such as cellos, and creates a hauntingly beautiful score that both contrasts and complements the film’s dark narrative.

Storywise, the film has obvious parallels to some of Martin Scorsese’s best known films including “Taxi Driver” and “The King of Comedy.” While the mentally distrubed protagonists of these films, Travis Bickle and Rupert Pupkin, both played by Robert De Niro, do somewhat resemble Arthur Fleck, the film is far more than a knockoff of Scorsese’s direction.

While there are some nods to these films, such as Arthur pointing his finger to his head in the shape of a gun, Todd Phillips creates a film that is distinguishable from any other.

The film had an immense backlash from the public with concern over the depiction of violence in “Joker.” In Aurora, Colorado, the Century 16 Theater, where 12 people died in a 2012 shooting at a screening of “The Dark Knight Rises,” banned the screening of “Joker,” according to The Hollywood Reporter.

While the film does contain horrific violence, it’s mainly contained in the third act and is not as frequent as one might think. What makes the film truly disturbing is the inner workings of Arthur’s mind.

One of the main questions the film asks is how society makes people like Arthur who feel ignored by society and stumble into the world of violence. Part of what makes the film frightening is how the world and people Arthur interacts with create The Joker.

“Joker” is a film that, while based on DC Comics characters, keeps to itself and isn’t intent on starting a franchise. The film isn’t even connected to the DC Extended Universe whose recent filmography includes “Aquaman,” “Shazam!” and the upcoming “Birds of Prey (and the Fantabulous Emancipation of One Harley Quinn).”

While many of these films are well made and fantastic in their own right, “Joker” is a different kind of comic book film. It’s among a handful of films, like “Logan” and “The Dark Knight,” that transcend modern expectations of comic book films.

“Joker” is one of the best films of 2019 and crafts a narrative unseen in modern cinema. It constantly treads between funny and frightening. But considering that the film centers on The Joker, it would be shocking if that wasn’t the case.