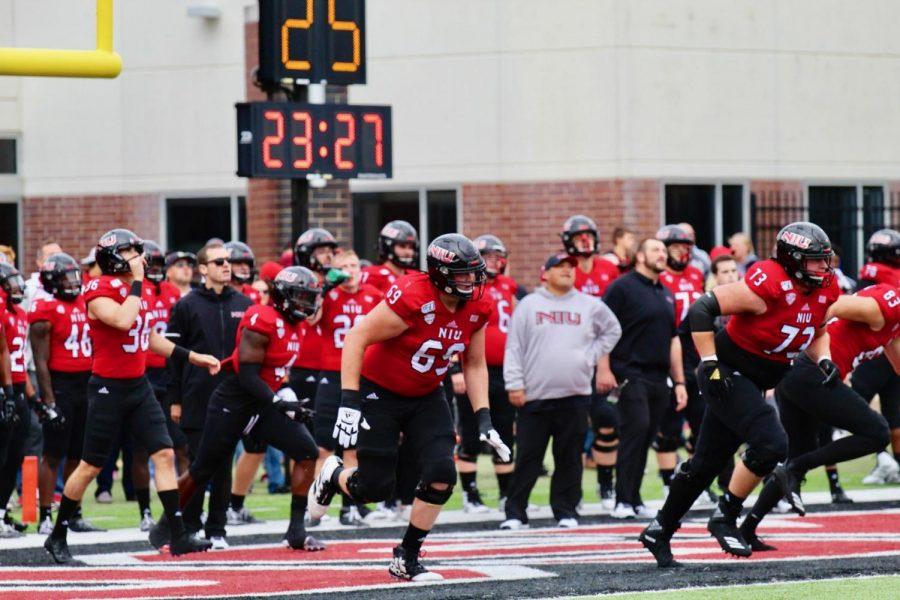 The Huskies run onto the field Oct. 5 at Huskie Stadium before a game against Ball State University.

The way student-athletes are compensated for their play is starting to change. California Gov. Gavin Newsom signed the Fair Pay to Play Act Sept. 30, which will allow student-athletes competing at state and private universities to sign endorsement deals. Student-athletes will be eligible to receive compensation for the use of their image and likeness without losing National Collegiate Athletic Association eligibility status, according to the act.

The law will go into effect in January 2023, so other states and the NCAA have ample time to adjust to this law. Many other states have started the process of passing similar legislation; Illinois is in this group, and for good reason.

Illinois State Rep. Emmanuel “Chris” Welch introduced this bill Sept. 30 with the intention of keeping up with California in recruiting processes, according to a Sept. 30 Chicago Tribune article. This is a huge step in the right direction, but the quicker the action, the better the result.

California is going to have a competitive advantage in the recruiting world because of this legislation. Any top-level athlete is going to want to play for California schools because there is the potential to make money, which is why it is imperative that Illinois adopt this bill.

NIU has reached its lowest enrollment since 1986, according to a Sept. 12 Northern Star article. This bill has the potential to bring in athletes from across the nation, benefitting the athletics programs. Top teams in college athletics also show some of the best undergraduate enrollment numbers. In an Oct. 1 U.S. News ranking of undergraduate enrollment, eight of the top ten schools listed also boast Division 1 athletic programs.

This legislation does not come without pushback. The NCAA sent a 327-word letter to Gov. Newsom, urging him to veto the bill, according to a Sept. 11 CBS Sports article.

The NCAA sees competition as a fair playing field for every athlete, but if student-athletes in California can be endorsed, it isn’t fair. This is the root of the NCAA’s opposition to the legislation; it doesn’t see the athletes as professionals. It sees them as students and only students.

The Fair Pay to Play Act is the beginning of a solution to a discussion that has gone on in the sports world for a long time. It seems complicated to some, but the bottom line is athletes deserve to be paid for the use of their image and likeness.

The NCAA is a money-making machine, and it benefits from athletes being paid solely in the form of scholarships. The NCAA brought in $1 billion of revenue during the 2016-2017 school year, according to a March 26 Business Insider article.

This revenue is mainly drawn in from the March Madness Tournament, which includes 68 Division 1 teams from across the nation. These schools bring in huge sums of money from the competition of their athletes but do not offer the same compensation to the athletes themselves. The NCAA and schools may not be willing, but in the near future, someone else will be, and they are going to pay athletes what they deserve.