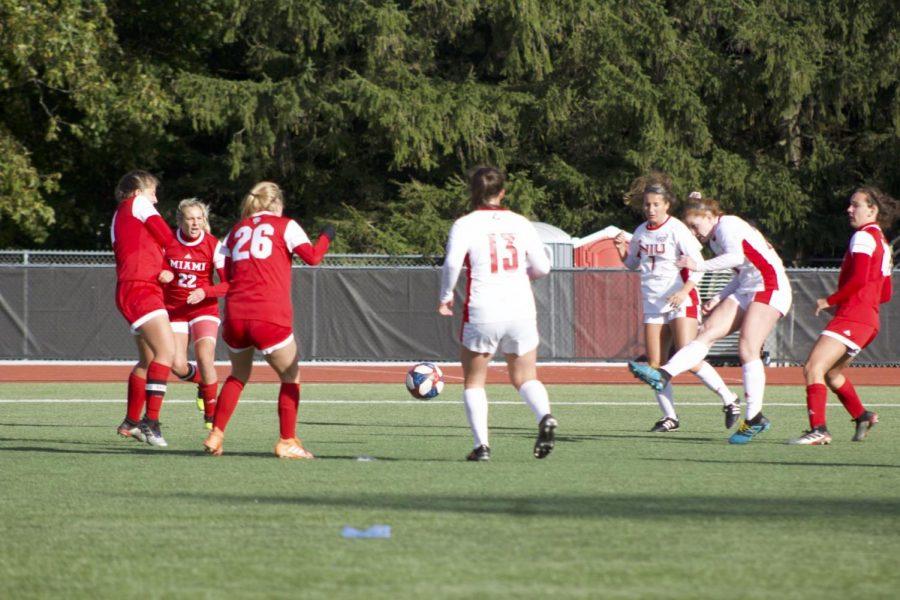 DeKALB —While women’s soccer didn’t get the win, it made sure Miami University – Ohio didn’t leave DeKalb on Sunday with one either. The game ended in double overtime at 1-1 at the Soccer and Track and Field Complex.

Senior defender Kelsey Chope had the lone goal for the Huskies. NIU Junior goalkeeper Megan Donnally had 10 saves and sophomore goalkeeper Julia Lentz had one save after subbing in late in second overtime.

The Huskies came out aggressive early in the first half and advanced the ball into RedHawk territory several times.

In the eighth minute, NIU senior forward Abby Gregg put a shot on goal, causing Miami sophomore goalkeeper Izzie Vaccari to come out and block the shot. Chope took advantage of the situation and rebounded the ball, sending a high-arcing shot through the net.

“Abby had an unlucky shot and hit it off their corner kick, and we had numbers up so I was there to place it in the back of the net,” Chope said. “We were able to get everybody up on the attacking end of the field, which kind of led to the goal.”

The Huskies appeared active on defense early as well. Defenders were instrumental in several disrupted RedHawk corner kicks and bad shots. Donnally had several spectacular saves, including a close one which deflected off her to the top post, before heading out. Donnally fell to the ground, appearing a bit shaken, but continued on. NIU senior defender Lauren Neslund was a key player on the Huskie’s back line. The Huskie was content with the way the team played.

“It was gritty,” Neslund said. “People were just coming up with saves with their faces, with any part of their body that they could get on the ball.”

Midway through the first, Miami started putting more pressure on NIU, advancing the ball deep into Huskie territory several times. The Huskies were forced to play defense for most of the second half.

Donnally had several big saves, keeping the Huskies afloat before the end of the first half. She finished the half with four saves.

With 30 seconds remaining in the half, the RedHawks went on a run down the right side, crossing the ball to MU sophomore forward Kristina DeMarco who was right in front of the goal. DeMarco sent a shot past Donnally to score, but the goal was overturned as a ref called DeMarco offsides.

The Huskies finished the half with 10 shots, four being on goal.

NIU seemed to play a little more aggressive on offense in the second, but putting together complete advances to get good looks on goal seemed to be a problem.

While the defense continued to put together several stops, NIU’s string of stops ended in the 70th minute, with DeMarco scoring. Several players were packed in the box, making it difficult for Donnally and the defenders to make the stop. The game was tied at 1-1.

After the goal, the Huskies played with a renewed intensity, advancing the ball on offense more often. Unfortunately, when the ball was deep in RedHawks territory, the ball handlers didn’t have much help, leading to several missed opportunities.

In the 88th minute, MU first-year midfielder Emily Sexton sent a high shot to the far post. The shot looked like it was going to go in, but Donnally was there to make a strong acrobatic save with her right hand, sending the ball over for a corner kick. After the game, Donnally’s coach and some of her teammates had a lot to say about the goalkeeper’s overall great performance.

“It’s almost like we’ve come to expect these great things from her,” Colhoff said. “She does her job. She keeps us in the game. She comes up with the stops she needs to, and now she’s being consistent which is key.”

“She’s absolutely amazing,” Neslund said. “Last game and this game too, she came up with insane saves. She had one with her face today, she put it all out on the field.”

In the final two minutes, the Huskies stopped a corner kick to hang on and send the game to overtime.

Not much occured in the first overtime, other than a shot on goal from first-year defender Kennedy Gray, which was saved by Donnally.

In the second overtime, both teams increased their intensity, and MU was able to put two shots on goal. NIU advanced the ball, but struggled to get in position to attempt shots.

In the 107th minute, MU senior midfielder Olivia Winnett attempted a shot, but Donnally made the stop. Unfortunately during the play, Donnally was seemingly knocked unconscious after the ball hit her in the head. She was helped off the field by the coaching staff and tended to on the sidelines.

Lentz subbed in for the injured Donnally to finish out the game. She was able to pick up a save in the 110th minute off a shot from sophomore midfielder Jordan King, ultimately allowing for NIU to hold on and get the tie.

The biggest takeaway from the game was NIU’s improvement on defense, a promising trend from game-to-game late in the season. Most notably, the defense improved during corner kicks, which MU had 19 of.

“We work on that probably weekly,” Colhoff said. “It’s something that we’ve talked about taking a lot of pride in. Unfortunately, I think we gave up way too many corner kicks. With that, it’s about coming up with those stops, which is good to see.”

With the tie, NIU’s record is at 2-9-2 and 0-5-1 in Mid-American Conference play. The Huskies also snapped a five-match losing streak, which was the longest of the season.

The Huskies will return to the field 6 p.m. Friday against the University of Buffalo in the UB Stadium in Buffalo, New York.