“Lover” proves to be a triumph for Taylor Swift 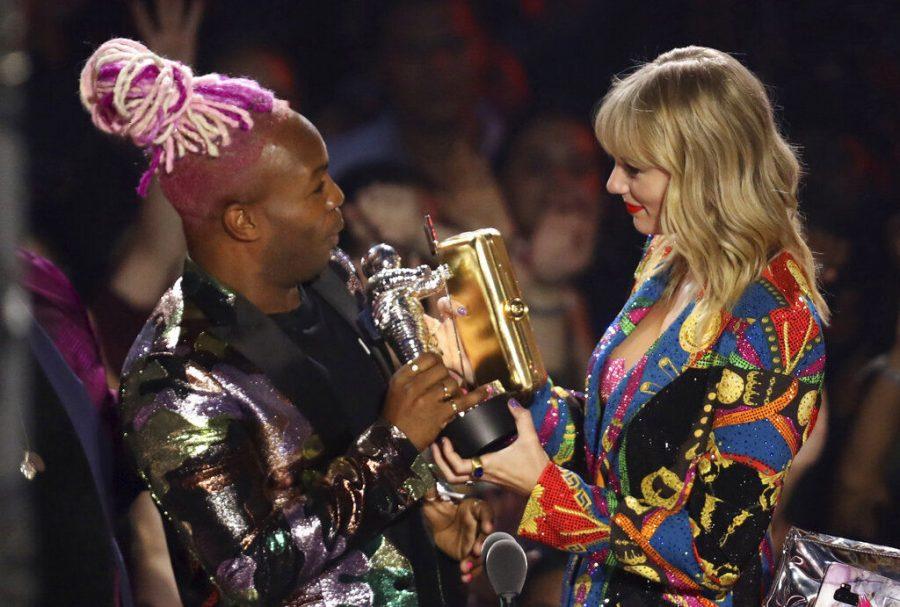 Todrick Hall, left, hands Taylor Swift the Video of the Year award for "You Need to Calm Down" Aug. 26 at the MTV Video Music Awards.

After the album “Reputation” marked a departure from Taylor Swift’s typical lyrics about romance, Swift returns to form with her latest album, “Lover.” Despite this, “Lover” is an enjoyable album in the synth-pop genre, with tracks that reflect Swift’s musical origins while also defining her pop star persona.

“Lover” opens with the track “I Forgot That You Existed,” and is as standard of a Taylor Swift song as they come with Swift singing about, shocker, being wronged by a man and saying how he no longer matters. The song is relatively catchy and hooks the listener, but is merely an opening act for the real attraction. Thankfully, very few songs on the record fall into the mold for generic pop songs cranked out by soulless music managers.

The titular song, released as a single Aug. 16, is one of the slower tracks on the record with a romantic beat composed of a bass guitar working with light percussion, both provided by Jack Antonoff. However, the laid-back atmosphere of the song works to the overall advantage of the album by giving the listener an opportunity to breathe while offering a track of substance. The lyrics are poetry and capture both the typical feelings associated with love as well as the zany acts significant others do out of affection. “And I’m highly suspicious that everyone who sees you wants you/ I’ve loved you three summers now, honey, but I want ’em all.”

“Soon You’ll Get Better” is a pure piece of nostalgia with a simple arrangement of a guitar, piano, banjo and fiddle, acting as a look into Swift’s early days where her music was heavily influenced by country. Featured on the track are the 13-time, Grammy Award winning Dixie Chicks who took country music by storm in 1998 with their album “Wide Open Spaces.” The titular song of that album, charted at number one on US Billboard Hot Country Songs and at number 41 on the US Billboard Hot 100.

What many will cite as the most important song on the album is easily it’s first promotional single, “Me!,” released on April 26. The song is a duet between Swift and Panic! at the Disco frontman Brendon Urie and charted at number two on the Billboard Hot 100. With its infectious melody, the song spreads a message that many can relate to. Even though one’s partner can drive them crazy sometimes, the feeling of love and knowing that someone cares makes it all worth it.

While all of the songs on the album range from fine to fantastic, the album’s runtime of one hour and one minute make listening to the album a chore at times. If three to four tracks were cut from the record, “Lover” would have had a tighter pace, which would have made Swift’s latest effort more enjoyable to listen to. As is, the album still contains an element of charm that makes the whole experience worth it.

In July, Swift’s former label, Big Machine, was bought out by Ithaca Holdings, according to NPR. As a result, all of her albums made before “Lover,” including the groundbreaking “1989,” are no longer under her ownership. Since this, Swift has stated, in an Aug. 22 interview with Good Morning America, that she plans to re-record her previous albums starting in Nov. 2020. As Taylor Swift goes through the arduous process of re-recording all of her early albums, it’s still good to know that her creativity has not been hindered.

“Lover” is an album that shows off Swift’s domain of pop, but makes sure that her talent for songwriting maintains its full spotlight.