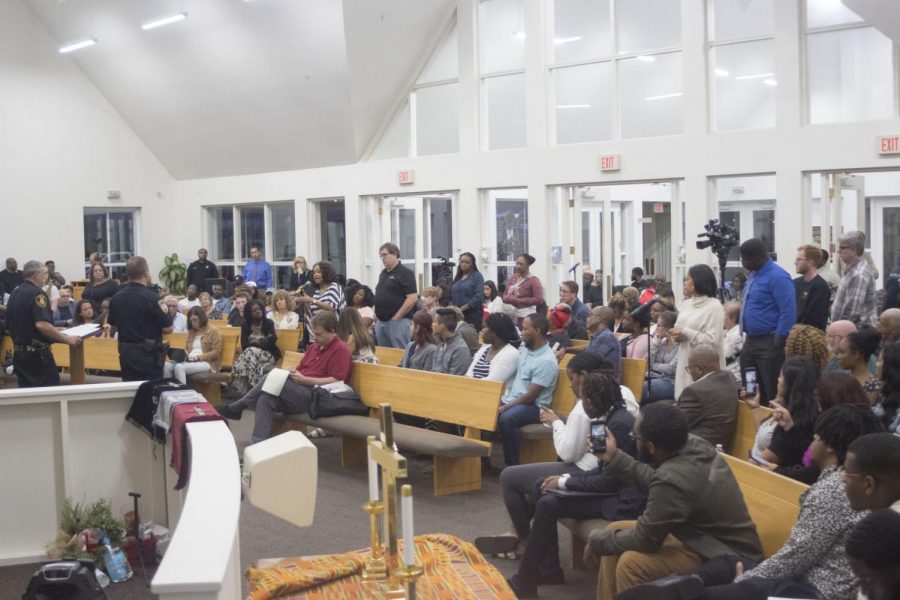 Attendees listen as Trevada Redmond, of DeKalb, asks police leadership how they plan to hold themselves and their officers accountable.

At a community meeting Wednesday night, DeKalb Police Chief John Petragallo agreed to post a daily breakdown of arrests by race and economic status to the department’s social media, following a demand by a resident.

DeKalb community members filled New Hope Baptist Church for a collective conversation with Petragallo and DeKalb County Sheriff Roger Scott following the use of force in an arrest incident Aug. 24. The event was organized by New Hope Pastor Joseph Mitchell.

“Watching the video left me concerned, not only nationally, but here in this community as well,” Mitchell said. “It’s important at times like this to start at the table with a conversation.”

Near the end of the meeting, a resident asked the audience to stand if they believed the McDowell arrest incident was not an isolated incident. Most of the audience stood up.

“I want to ask you to put on your Facebook and on your YouTube, daily, for an account of everyone arrested by race and by economic status,” the resident said.

“We can do that,” Petragallo responded.

Lines behind the three microphones, placed between the pews, grew as the night went on. The crowd filled the seats in the hall, and extra folding chairs were placed in the lobby.

Petragallo said the McDowell stop was out of the norm. He called it a “Terry stop,” as opposed to a more common traffic stop.

A Terry stop occurs when officers pull over an individual based on reasonable suspicion, named after the standards set out in the 1968 Supreme Court case Terry v. Ohio.

Petragallo said the police department had received an informative tip containing details of the kind of car McDowell was driving, when he would arrive and where he would be driving. The officer stopped McDowell in order to corroborate the information in the tip, he said.

The DeKalb officer seen using a chokehold in the video has been put on administrative duty until an independent State police investigation is completed. Petragallo said the investigation’s tentative date of completion is in three to four weeks.

In response to SA Senator Ashley Hines’ question on whether the officer should have checked for McDowell’s pulse, Petragallo said he will leave that up to the State police investigation.

SA President Naomi Bolden stood up from her seat in the front row, found a microphone and said she doesn’t see the need to leave that up to investigation.

“I’m sorry, what has to be looked at when this man said, ‘I can’t breath’?” she asked. “Because if I remember correctly, Eric Garner, who died in New York City, who said ‘I can’t breath’ before he died, you wouldn’t check his pulse?”

The county sheriff, Roger Scott, said the officer who used a stun gun will not face disciplinary action. Scott said their policy allows the use of stun gun to reduce or prevent injury, and he believes its use justified in the McDowell arrest.

Many residents pressed the police to work towards ensuring incidents like these don’t happen again. Residents proposed sensitivity training, citizen oversight and more representation of minorities in the police force.

Petragallo said there are five black officers and three hispanic officers on the force. There are 65 officers total, according to the DeKalb police website.

Joseph Flynn, associate professor of curriculum and instruction, said he was hearing in the 70s “brothers stay out of DeKalb.” He said he’s 48, never been arrested and he’s still afraid when he sees a cop car.

Trevada Redmond, of DeKalb, said she doesn’t let her 17-year-old son drive at night because she’s afraid of how the police will perceive him as a black teenager standing at 6 feet 2 inches and 200 pounds.

“There needs to be a total overhaul,” she said.

Joe Gastiger, pastor at First Congregational United Church of Christ, said the situation would not have happened if the police pulled over a 32-year-old white man from Naperville.

“I think that’s something you’re going to have to address in some community way to reassure people that we are treated equally under the law,” he said.

Maurice McDavid, of DeKalb, said he sees a need to acknowledge the implicit bias in the community.

“I was born and raised here, [I’m] a servant of the community, and I still feel that shift in the room when I walk in, that black males throughout American history have been seen as dangerous,” he said. “I think in a situation like this one, had we been aware of that bias and been willing to counteract it, things might have gone a little differently.”

In a comment after the meeting, Tiara Huggins, of DeKalb, said the community needed a meeting like this to deal with tensions growing, even before the McDowell incident went viral.

“We have already dealt with first steps, we should be past the first step,” she said. “I’m trying to see when we can put an end to people in this community feeling like we’re not wanted here.”

SA Chief of Staff Antonio Johnson said the DeKalb Police Department should hold more of these conversations to strengthen their community ties.