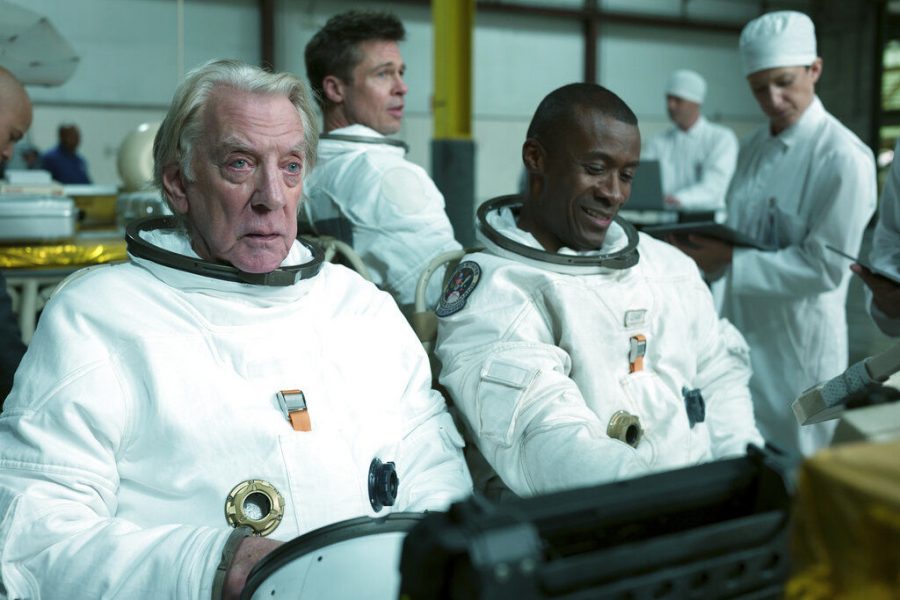 (from left) Donald Sutherland, Brad Pitt and Sean Blakemore star in "Ad Astra" as their characters prepare to rover across the surface of the Moon.

After displaying his comedic side in “Once Upon A Time In Hollywood,” Brad Pitt once again leads a star-studded cast in the science fiction epic “Ad Astra.” The film is a breathtaking marvel of science fiction with a fantastic cast, brilliant special effects and a grounded plot that acts as a character study rather than a simple science fiction adventure.

Brad Pitt stars as Major Roy McBride, an astronaut in the near future who survives an explosion in Earth’s atmosphere caused by a mysterious surge. When it’s discovered that the surge came from the planet Neptune, where McBride’s father, played by Tommy Lee Jones, disappeared, McBride embarks on a mission across the solar system to find the source of these surges before human life is jeopardized.

Pitt’s performance is so strong that it could result in his getting nomination in two acting categories at the upcoming Academy Awards: Best Supporting Actor for his role as Cliff Booth in “Once Upon A Time In Hollywood” and Best Actor for his performance as McBride. At first, McBride appears uninterested and distant, but as the film progresses, the audience realizes what makes him so cold and the investment in the film’s plot increases. McBride undergoes so much trauma over the course of the film, and the development of his character is fantastic.

Donald Sutherland and Tommy Lee Jones deliver compelling performances as two men broken by their experiences with space travel. Jones in particular delivers so much atmosphere and emotion despite saying few lines in the film. While Jones is great at dialogue as seen in “The Fugitive” and “Lonesome Dove,” his facial expressions say everything the audience needs to know, which is a testament to his power as an actor.

The film’s cinematography by Hoyte van Hoytema is masterful and on par with her work in “Interstellar” and “Dunkirk.” The camera movement captures the elegance of space travel as well as the disorientation of having no gravity and spinning around in the void.

Wide shots are also used to put into perspective how miniscule humans are compared to the ever expanding universe. Hoytema is a fantastic asset to the film and the fact that her work has yet to earn an Oscar is criminal.

“Ad Astra’s” plot, despite only being two hours and two minutes, feels more like three hours due to slow pacing. This could be an asset or a detractor of the film depending on the viewer. If one is invested in Pitt’s character and wants to learn about the world he inhabits, then the pacing will work to the film’s advantage.

For those hoping for a tightly packed, race against time type of film, “Ad Astra” may disappoint. The script manages to keep the film interesting with McBride’s steel wall being stripped back and his true emotions being revealed throughout the film resulting in a brilliant dive into a man’s psyche.

The special effects are amazing and look very realistic with a healthy mix of practical effects and sets with computer generated imagery. The film’s setting is during the near future and this technology looks like it could be developed in the next two decades.

“Ad Astra” is an original science fiction film that transcends the genre into a higher plane. The analysis of the human spirit in a larger than life environment is reminiscent of “Apocalypse Now” and is just as meticulously crafted. It will keep one guessing until the end and is a visual spectacle. For those tired of sequels and remakes, “Ad Astra” is a perfect film to watch during a trip to the theater.