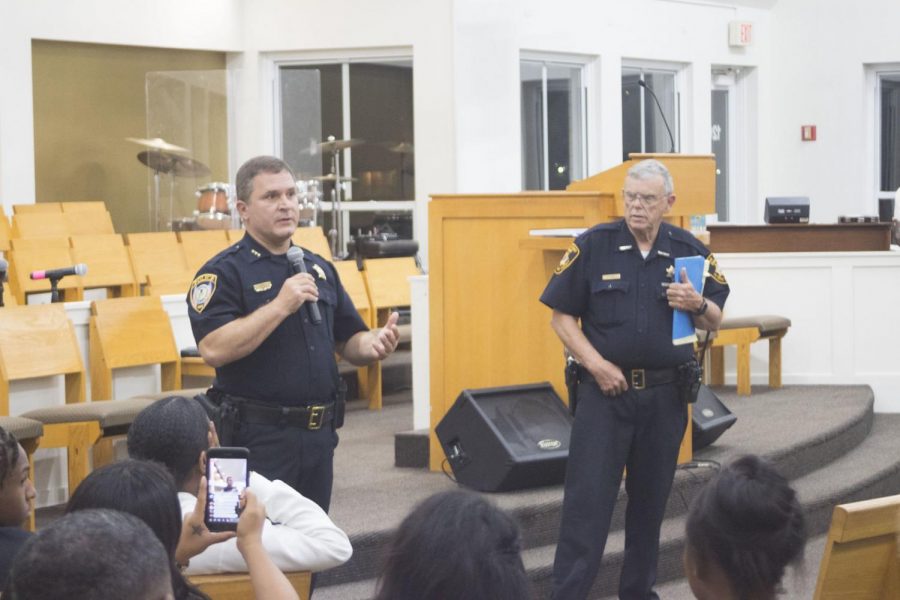 The DeKalb Police Department is working on creating a web-based system that displays a daily breakdown of arrests by race and economic status following a resident’s demand to post the information online during a community meeting on Sept. 4, interim Police Chief John Petragallo said.

The community meeting on Sept. 4 was held at New Hope Baptist Church with DeKalb interim Police Chief John Petragallo and DeKalb County Sheriff Roger Scott following a video that went viral on social media after a DeKalb police officer was shown choking a man during a police stop on Aug. 24.

An investigation by Illinois State Police is ongoing and Petragallo said the investigation’s tentative date of completion is in two to three weeks.

Originally, a resident had asked the police department during the meeting to upload the demographics to their social media every day, but Petragallo said a web-based system is a better platform to produce statistics. He said he hopes the system can be ready this week, but nothing is confirmed yet.

“We are working on a web-based system that would be accessed by the public so they could get real-time information from police reports,” Petragallo said. “On [the police department’s] end, we have almost everything prepared. We need the company we’re working with to set [the web-based system] up.”

Petragallo said the police department uses a record management system through a company which in turn they pay a service fee to. He said the department can request the company to run a citizen informational portal, like the one they are currently working on now, for a cost.

He said the portal is something they have been thinking about producing before the Sept. 4 meeting, but they couldn’t launch it because it wasn’t compliant with the Americans with Disabilities Act.

Petragallo said before the department went paperless, they had a clipboard with arrest information available to the public at the station. He said the online system will be similar to the paper one.

“I’m hopeful that it will be available soon and the public will have the ability to access it, to look at what we’re doing and have the statistics,” Petragallo said.

Flynn said if there is an over-representation of African Americans and Latinos being detained when the police department releases the data, it will create a lot of questions within the community.

“There are more than enough examples currently and throughout history that shows that just because you show the data, that doesn’t necessarily mean that everyone is still behaving the way they ought to,” Flynn said.

“We do get good training,” Petragallo said. “That’s not to say that we can’t do more.”

Petragallo said the department is also considering body cameras for officers as well. He said body cameras have been in discussion for a few years, but have not been installed due to the costly price.

Between the cost of the actual cameras, the cost to store the video footage and the staffing it’ll take to respond to bodycam Freedom of Information Act requests, it’s a big endeavor, Petragallo said.

He said his mission would be to develop a pilot study for 2020 and eventually launch a full program of body cameras in 2021.

Flynn said he can if see body cameras are functioning properly throughout an entire interaction then they can be an important tool.

“I don’t think [body cameras] should be seen as the panacea to these serious issues,” Flynn said.