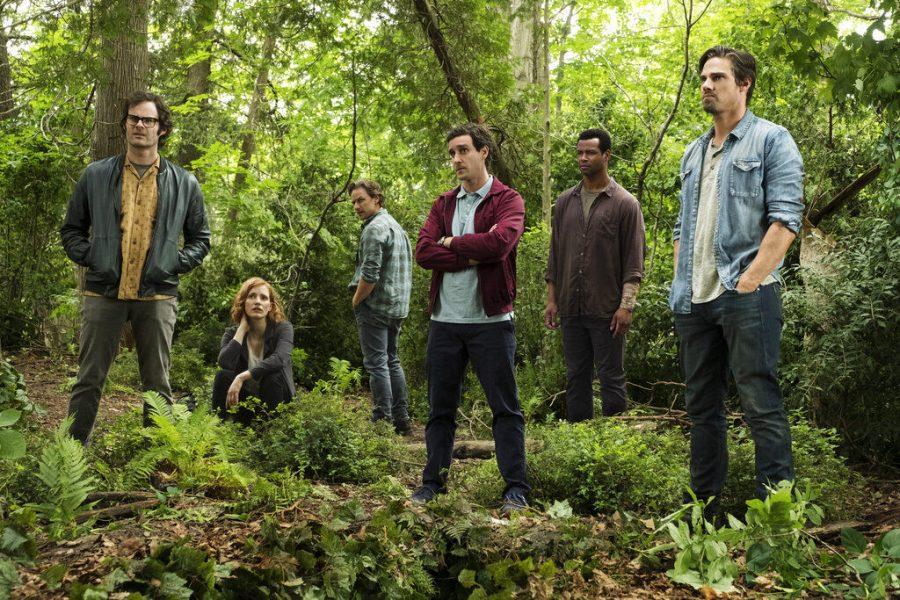 (From Left) Bill Hader, Jessica Chastain, James McAvoy, James Ransone, Isaiah Mustafa and Jay Ryan star in "It: Chapter Two" as the grown up versions of the Losers Club from 2017's "It."

Making “It: Chapter Two” couldn’t have been easy. It takes a great deal of talent to take the weakest aspect of Stephen King’s 1986 novel “It” and the 1990 miniseries of the same name and create a compelling film. Despite some flaws, “It: Chapter Two” is an entertaining film that further evolves the characters of 2017’s “It,” while being delightfully frightening.

The film takes place 27 years after the events of “It” and sees the Losers Club, played by an ensemble cast including James McAvoy, Jessica Chastain and Bill Hader, come back to their hometown of Derry, Maine to defeat the demonic entity that plagued them as children, known as It, once and for all.

As adults, each of the losers have evolved with Bill, Beverly, Ben, Mike, Richie, Eddie and Stanley, played by James McAvoy, Jessica Chastain, Jay Ryan, Isaiah Mustafa, Bill Hader, James Ransone and Andy Bean respectively, living successful, yet flawed lives. The casting of the Losers is pitch perfect, with it appearing as though the child actors of the first film have grown up into these new adults. Bill Hader, in particular, is basically a clone of Finn Wolfhard and his performance as Richie is one of the highlights of the film.

However, like the previous film, the best performance is Bill Skarsgård as Pennywise the Dancing Clown. This iconic form of It constantly walks on a tightrope, circus pun intended, between terrifying and hilarious. Just like Tim Curry in the 1990 miniseries, Pennywise goes from inducing laughs to screams with every scene that he is in.

Narrative-wise, “It: Chapter Two” is very confusing. While the first and third acts are compact and thrilling, the middle portion of the film really lags at times. The film’s runtime is two hours and 50 minutes and during the second act, the viewer can feel this runtime.

Thankfully, the film splices Pennywise scares and entertaining flashbacks, with the child actors of the original film returning. These flashbacks not only distract from the nearly three hour runtime, but also offer more insight into the pasts of these characters, causing the audience to grow more invested into the film.

Bringing back the child versions of the Losers was a good decision because in both the novel and the miniseries, the adult aspect of the story wasn’t that compelling. While the adults in this film are more empathetic than those of the 1990 version of “It,” seeing these children again is entertaining and also helps connect “It” with its sequel.

The film also has more comedic moments than the first film, which help offset the scary tension of the film, but there are moments where the audience will want to say “Beep beep ‘It: Chapter Two’” or, in other words, tone it down. Humor can be used to great effect in horror films like “The Evil Dead” series or “Scream,” but overreliance on humor can make the jokes feel tired and lazy. Granted, these moments are few in number but, when they exist, it does take the audience out of the film.

One aspect of the film that is admirable is how “It: Chapter Two,” as well as “It,” takes scenarios of the novel and miniseries that didn’t work and either put a new twist on them or simply discards them altogether. These include more character development, little to no new supporting characters and devoting more time to the horrors that the Losers Club left behind.

In the original novel, the climax was a battle of wits which was very investing on the page but resulted in a disappointing ending to the 1990 miniseries. “It: Chapter Two” manages to create both a mental and physical battle for the Losers to fight in, which leads to a thrilling finale.

“It: Chapter Two” is better than the original adaptation, there’s no doubt about that. As a film it tends to be confusing and even dull at times, but with a strong cast, entertaining scares and a good balance of horror and humor, “It: Chapter Two” is worth a trip to the movies this fall. It may be a little silly, but the main villain is a clown. It would be more disappointing if the film didn’t have a sense of fun.