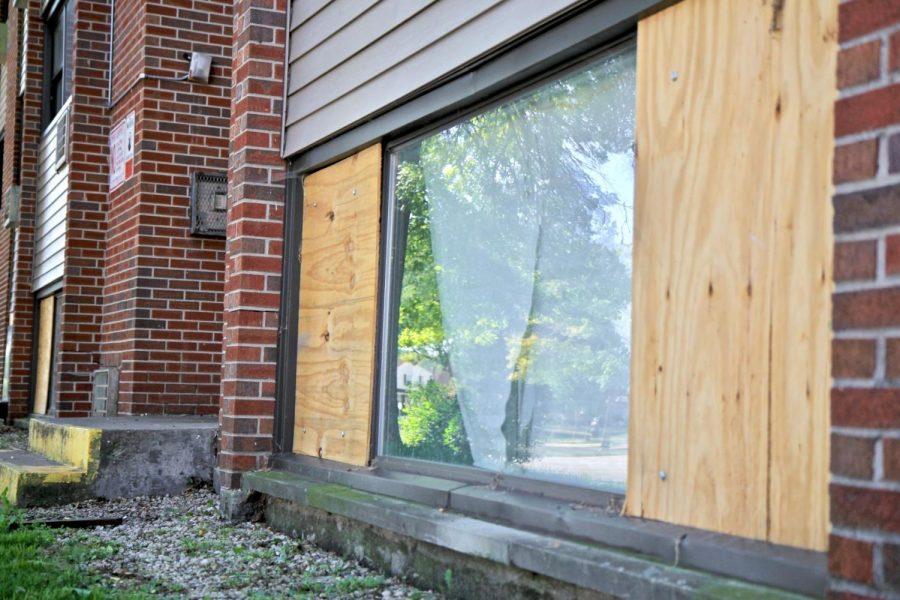 A boarded-up window stands at the condemned 808 Ridge Drive apartments.

DeKALB — A proclamation was put in place during Monday night’s City Council meeting where current and former tenants of Hunter Properties spoke about property issues they experienced while leasing with the company.

The proclamation follows a series of 483 code violations for Hunter Properties since 2017 for broken smoke and carbon monoxide detectors, bed bug infestations, security failures and more, according to the Aug. 12 City Council meeting agenda. Hunter Properties also filed a federal lawsuit against the city of DeKalb for $10 million for “unequal, unfair and discriminatory treatment” by city staff to Hunter Properties, according to federal court documents.

The proclamation, made by Mayor Jerry Smith, states: “The City of DeKalb will continue to provide code enforcement and legal actions to ensure safe and habitable housing.”

“This needs to stop,” John Hagens, a former Hunter Properties tenant said. “I’ve lost everything I’ve owned, and I’m talking about things that can’t be replaced.”

Hagens said he was a victim of unpainted walls, no heat and no other proper maintenance done to his apartment.

He said the property owner wanted him to sign his lease two months early, which he did, but it ended up failing six inspections – this led to Hagens making the decision to revoke his right to lease an apartment.

Hagens said his rent was paid until April 1 and when he went to collect his belongings, they were gone.

He said the situation has caused a large amount of stress in his life, including going to court for eight months.

{{tncms-inline alignment=”left” content=”&lt;p&gt;&amp;ldquo;We as a City Council, and we as a city administration, fully realize that we have a couple of bad apples, perhaps one has been outlined pretty specifically tonight. But we have a wealth of good landlords who keep their properties clean, who address the concerns of their tenants.&amp;rdquo;&lt;/p&gt;” id=”b8066814-431c-4980-870b-2d6bda09e317″ style-type=”quote” title=”Mayor Smith” type=”relcontent”}}

Roxanne Jenkins, a former Hunter Properties tenant of three years, said her experience with the property was a nightmare. She said she was affected by black mold and outside doors with broken locks, which were never replaced and resulted in homeless people staying in the hallways. Jenkins said when she reported to the apartment’s office, they told her there was nothing they could do.

“What is so complicated about having a nice environment with the basic things that we need?” Jenkins said.

Jenkins said with the proclamation in place from the city council, she feels as if she finally has support behind her from the city.

Larry Apperson, chair of the Human Relations Commission, said the city can’t afford to have substandard housing due to the fact that it is a university community and low enrollment at NIU means less people renting.

“We all have to do what we can to bring up the standards and make sure the word of mouth, in this case of student-tenants to their friends back home, will say something to the effect [of], ‘yeah, I’ve had a pretty good experience. In fact, I’m going to be graduating; you might want to see if you can rent my apartment,’” Apperson said. “I don’t think we’re getting that word of mouth currently for several of our complexes.”

Debbie Bogacki said she has been a tenant of 808 Ridge Drive for five years until the fire in July forced her to relocate to another building owned by Hunter Properties on Russell Road. Bogacki said when she moved in, the landlord told her there was garbage still in the apartment, but it turned out to be a college student’s belongings because his name was still on the lease.

“The water heater exploded and there was hot water everywhere,” Bogacki said. “I called the fire department because I didn’t know who else to call. I couldn’t call Hunter because they would show up seven days later to fix the problem.”

Bogacki said she’ll live with Hunter for another year until her lease expires.

Jacob Mass, an organizer for the DeKalb Tenants Association and a senior history major, said the reason there is a problem between tenants and landlords is that residents don’t know their rights.

“We need better-attended education in this community; we need better enforcement mechanisms that tenants who are facing abuse can use to try to hold those people that are inflicting that upon them accountable,” Mass said.

Caprisha Williams, a junior nonprofit and NGO studies major, said she’s lived with Hunter Properties for four years and has been working with family members to try to find another place to live.

Williams said when people ask her why she’s still there, she tells them that she is “a broke college student,” and doesn’t have much of a choice. She said issues with her apartment are the last thing she needs.

Smith said Monday night’s meeting was a step in the right direction. in terms of progress.

“We as a City Council, and we as a city administration, fully realize that we have a couple of bad apples, perhaps one has been outlined pretty specifically tonight,” Smith said. “But we have a wealth of good landlords who keep their properties clean, who address the concerns of their tenants.”

Hunter Properties attorney Clay Campbell could not be reached for comment following calls made by the Northern Star.