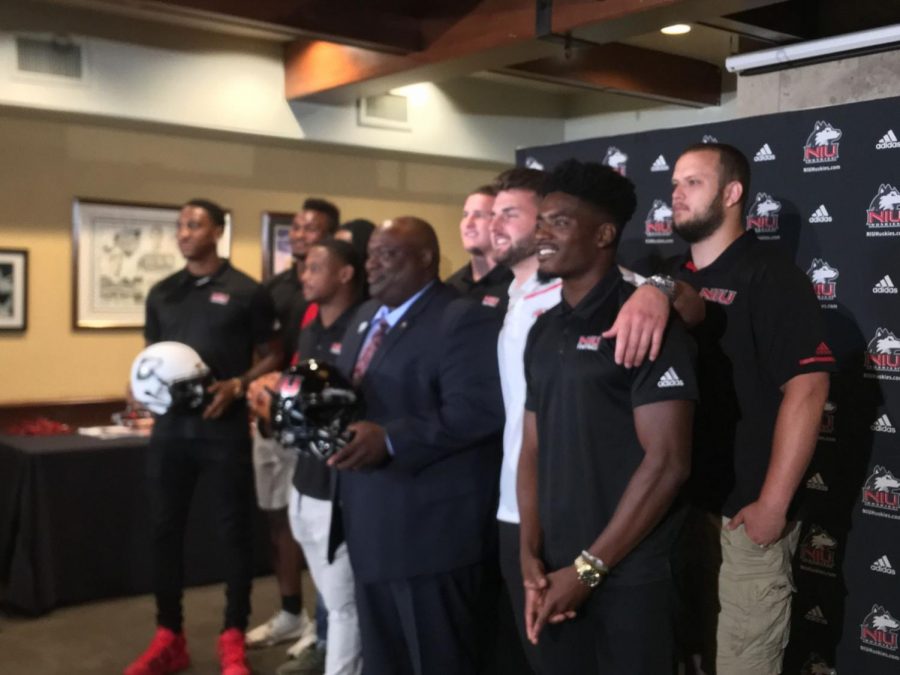 Thomas Hammock (middle) poses for a photo with a few key members of the NIU football team.

Hammock and several members of the team spoke to the media at Ditka’s Steakhouse in downtown Chicago to preview the 2019 season.

Following a Mid-American Conference championship last season, Hammock said the expectations of the program for the season are a culmination of his work from entering NIU in 1999 as a student to now.

The former Huskie running back said the offense will vary from the offense fans became familiar with under previous coach Rod Carey. Hammock emphasized various offensive formations, shifts and “eye candy” to throw off defenses.

The quarterback position was the main point of the Q&A session with Hammock. The transfer of redshirt senior Ross Bowers from University of California at Berkeley intensifies the quarterback competition with redshirt juniors Marcus Childers and Anthony Thompson.

Childers started all 14 games for NIU last season, finishing the year with 15 passing touchdowns and 10 interceptions. Bowers started 13 games at Cal, throwing 18 touchdowns before an injury sidelined him last season.

Hammock said the position battle will continue all the way up to their season opener against Illinois State on Aug. 31, with an emphasis on finding someone who can lead his offense.

“I think anytime you talk about the quarterback position, you’re talking about the leader of your team,” Hammock said. “To take leadership and to earn your teammates’ respect, that’s what we want to see. We want to see a guy who can command an offense.”

After averaging 166 yards rushing as a team last year, Jones said the Huskies are now even better equipped and prepared to be a threat running the ball.

“Before, we got away with having less discipline,” Jones said. “[Hammock and running backs coach Atif Austin] have done a great job of teaching us that you have to use all of your intangibles. This spring was probably one of the best evaluations we got as running backs.”

Hammock’s echoing of discipline is not just for his running backs, saying he’s proud of the strides senior wide receiver Spencer Tears has made since spring camp.

“I shook Spencer Tears’ hand a week ago because I was proud of the work he put in this summer,” Hammock said. “He’s taken a step, along with some other guys in that group, in accountability. If you do something wrong, mistakes happen, own it and make sure it doesn’t happen next time.

It’s not just on offense that big pieces have departed for the NFL, with defensive end Sutton Smith being drafted by the Pittsburgh Steelers. Fellow defensive end Josh Corcoran also graduated and has been signed to the Los Angeles Chargers.

Hammock thinks this year’s defense could be as big of a threat down the middle of the field as they were last year on the edges.

Pugh, who finished second to Jones-Davis in team tackles last year, said the biggest improvement he and the linebackers have made hasn’t been in skill but in recognition.

“I remember freshman year just struggling to get lined up and get everybody their plays,” Pugh said. “Now I can be a smarter player pre-snap because I’m more comfortable with the defense and I can help other guys be where they need to be lined up.”

Senior defensive tackle Ben LeRoy returns as well, saying the group will be able to rise to the occasion in filling in the spots Smith and Corcoran left.

“We have more than enough weapons to disrupt an offense,” LeRoy said. “There’s not really any pressure because that’s just football. You hear talk all the time but you still have to go out and play.”

The Huskies may already have an edge rusher on his way to game changing status like Smith in redshirt sophomore Michael Kennedy, who Hammock said reminded him in some ways of the former All-American.

“Kennedy is a guy that brings some speed to the edge,” Hammock said. “I think he brings some of the same qualities as Sutton Smith.”

The secondary is led by a pair of redshirt senior safeties in Mykelti Williams and Trayshon Foster, with grad transfer Marshe Terry from Connecticut adding depth to the position.

Question marks remain at the cornerback position with sophomores Antwain Walker and Jalen McKie being the only cornerbacks on the roster with starting experience, combining for three games.

Foster said being a leader will help him and others on the defense grow, along with young players they are molding to eventually take their roles.

On special teams, junior punter Matt Ference returns to the lineup after averaging 40 yards a punt over two seasons. After the graduation of kicker Andrew Gantz, redshirt first-year John Richardson will take over kicking duties this season.

Despite winning the conference championship game last year over the University of Buffalo Bulls, the Huskies only received one vote to repeat in 2019. The Ohio Bobcats were picked as the favorites to win the conference with 13 votes.

Hammock said staying healthy and peaking near the end of the season will separate NIU from other teams in the conference.

“You want to be healthy in the second part of the season,” Hammock said. “The way I look at it, the last four games of the season we play four division games. Things are going to be determined in that part of the season and you have to play your best football at the end of the year. You win championships in November.”

Some players are taking the idea of health seriously after issues last year. Pugh had surgery during the offseason to deal with shoulder issues that disrupted what turned out to be a breakout season.

“As you stack years at this level, the impacts start to add up eventually,” Pugh said. “The best future for the team and for yourself is to find different ways to take care of your body, be it load management or extra treatment.”

Game one of the Hammock era at NIU takes place at 6 p.m. on Aug. 31 at Huskie Stadium when the Huskies host in-state opponent Illinois State University Redbirds.