Quentin Tarantino scores again with ‘Once Upon A Time In Hollywood’ 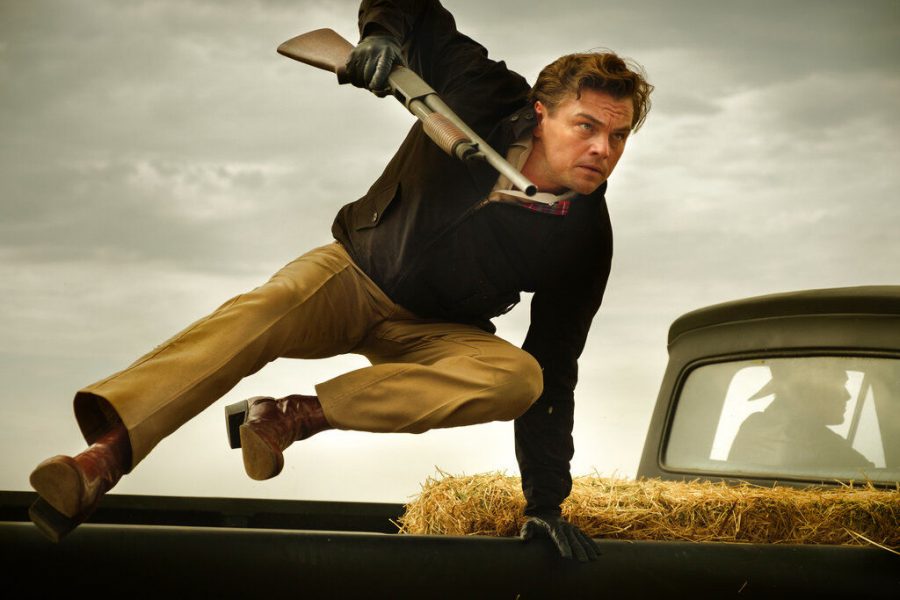 Rick Dalton, played by Leonardo DiCaprio, leaps out of a truck following a shooting in "Once Upon A Time In Hollywood."

Director Quentin Tarantino is, in a few ways, similar to director Stanley Kubrick (director of “The Shining,” “2001: A Space Odyssey” and “Full Metal Jacket”). Both have a limited filmography, with Kubrick at 13 films and Tarantino at nine. All of their movies are meticulously crafted and are treasures of cinema with both directors creating some of the greatest films of all time. Tarantino’s latest effort, “Once Upon A Time In Hollywood,” is among this year’s best and creates a fantastic narrative, while also examining the nostalgia of Hollywood’s “Golden Age.”

Leading the film’s ensemble cast is Leonardo DiCaprio, playing television western actor Rick Dalton, and Brad Pitt, as Rick’s stuntman Cliff Booth. Throughout the film, Dalton and Booth struggle to keep their careers afloat as Hollywood’s “Golden Age” comes to a close in 1969. As the film progresses the pair becomes connected to the infamous Manson family and Sharon Tate, played by Margot Robbie, an actress who is Dalton’s neighbor. As the year progresses to August, the pair of protagonists are caught in a night of terror involving the Manson family that the pair will never forget.

The depiction of 1969 Los Angeles is that of unconditional love for the time period. The production design, costumes and soundtrack thrust the viewer into the ’60s and will make the viewer feel as though they exist in an age without cell phones, the internet or IMAX motion pictures. At one point, the film shows a montage consisting of nothing but neon signs across Hollywood turn on as night falls and it is pure joy.

DiCaprio and Pitt are the reason to watch the film as their friendship and their chemistry steals the show. The pair makes the most trivial activities engaging, such as watching a television program they worked on and riffing over it. Lines that with any other actor, would be taken as mildly funny, they make into comic gold. While both characters are often seen together, neither one is interchangeable with the other. Rick’s main plot involves him trying to stay relevant as an actor while Cliff’s is centered on his interactions with the Manson Family as well as being the emotional crutch for Rick.

Robbie is remarkable as Sharon Tate and brings a level of purity that is associated with the late actress. Unfortunately, the character doesn’t do much that matters to the overall plot and many of her scenes, at times, feel like distractions from the main plot. However, none of these scenes, or the rest of the film, are unbearable and are actually entertaining and personal. The main purpose of Tate is to get the audience to know her before the terrible events of Aug. 8, 1969, which involves the protagonists of the film.

The rest of the cast is phenomenal with many famous faces including Kurt Russell, Al Pacino, Dakota Fanning, Micheal Madsen and Luke Perry in his final film following his death in March. All cast members are memorable whether they have five minutes or five seconds of screentime.

The Manson family contains a large portion of the cast, including Harley Quinn Smith, Maya Hawke and Lena Dunham, and they have a knack for transforming from whimsical hippies one moment to the creepiest monsters of the decade. Charles Manson, played by Damon Herriman, has little screen time but just screams levels of awkward discomfort knowing that this “nice guy” is actually one of the worst humans of all time.

Quentin Tarantino has received two Oscars but neither of them were for directing. Instead, they were for the screenplays to films he directed. This is a man that made a conversation about Quarter Pounders fascinating and he brings the same level of screenwriting to “Once Upon A Time In Hollywood.” His dialogue can range from philosophical ramblings to profane rants and it’s all beautiful to hear. One of the best scenes in the film involves Rick discussing the fundamentals of acting with a young child actress, played by Julia Butters, and it is a perfect balance of hilarious and tear jerking.

“Once Upon A Time In Hollywood” is not a superhero film. Or a sequel. Or a spinoff. Or based on a book. It is entirely original and enthralls itself in both reality and fantasy. The film is a love letter to Hollywood in an age long gone. Like the film’s of the 60s, “Once Upon A Time In Hollywood” is not afraid to take risks or respond to the demands of studios. It is purely from Quentin Tarantino’s mind and is a fantastic piece of art from a talented man. This is a film that will make those skeptical of going to the theater fall in love with cinema all over again.