Day 18 and 19 – Off to Paris: A first-hand account of studying abroad 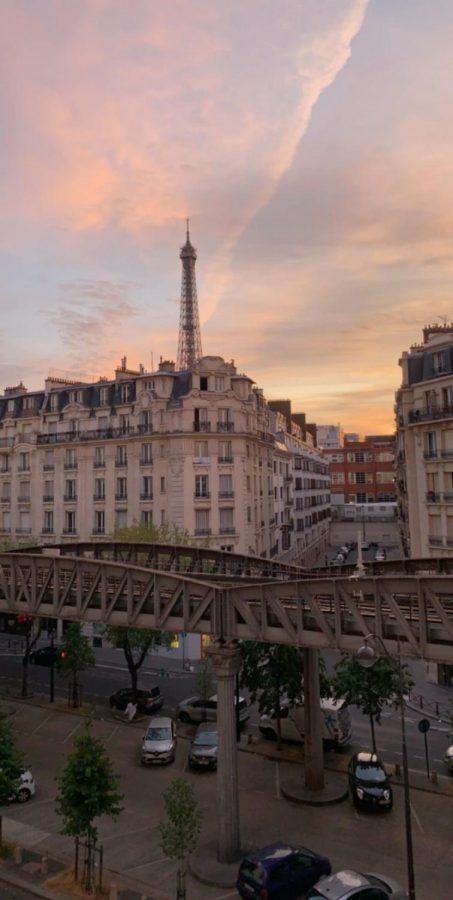 The Eiffel Tower stands tall over the buildings in Paris.

Bonjour! This morning I woke up early to catch a chunnel (underwater train) to France! I studied French in high school, so I was very excited to finally be able to use it, even though I was more than a bit rusty. When we arrived in Paris, we were very hungry and made a beeline for a crêpe shop. My mother definitely won’t approve of having chocolate crêpes for lunch, but it was the best decision I could have made. It was incredibly light and fluffy and the chocolate added the perfect touch! I had a perfect view of the Eiffel Tower from the crêpe shop, which made it all 10 times better! We had to wait a few hours before we could get into our Airbnb, so we wandered around the city. I tried practicing my French at the stores we shopped in, but most people could tell I was American and immediately switched to English. Hopefully I get more practice tomorrow!

Day 19: Heading back in time

Bonjour! Today was a big day for me! Along with being an English nerd, I am also a HUGE World War Two buff, so there’s no way I could go to France without visiting some of the sights. I decided to book a tour and I was picked up at 6:30 in the morning. Although it was way too early for my liking, I was able to enjoy breakfast on the balcony of the apartment we are staying at. We had a wonderful view of the Eiffel Tower from our room. I’ve seen a million pictures of it, but nothing took my breath away quite like this did. It was absolutely beautiful. This picturesque backdrop for my morning chocolate pastry more than made up for the early hour of my departure. It took about three hours to drive from Paris to Normandy, where my first stop was Pointe Du Hoc. If you’re unfamiliar with WWII, this is a spot of cliffs on Omaha Beach. When American troops stormed the beach, 250 Rangers were sent to scale the cliffs and take out eight German bunkers. Unfortunately, only 90 survived. This was a very eerie and solemn place. The bunkers were entirely untouched over the last 75 years. I was able to touch history that I’ve only read about in books. It was very sobering to realize I was standing where our troops so valiantly fought for freedom. My next stop was to Omaha Beach, which was even more sombre. I was able to spend time on the beach, reflecting about the sacrifices made there. After Omaha Beach, I continued on to the American cemetery. It might seem like the day was sad, but it was amazing for me to see these places that I’ve learned so much about, especially on the 75th anniversary of the war. It was an incredible day for me and was really a dream come true. I am so grateful for the sacrifices made for our country, especially for the thousands of people who gave their lives.

When I arrived back in Paris, I met up with the other students and we enjoyed a picnic underneath the Eiffel Tower. At the top of every hour after it was dark, the tower would light up and sparkle for 5 minutes. It was so much fun to relax and enjoy the beautiful view after such a heavy afternoon.