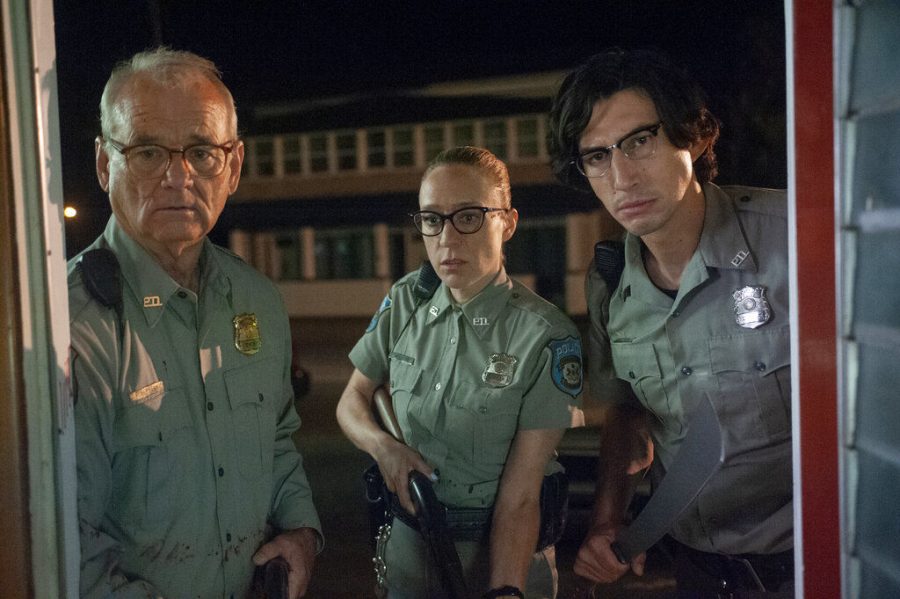 (From left) Bill Murray, Chloë Sevigny and Adam Driver star in "The Dead Don't Die" as three police officers who try to save their town from zombies.

It’s bizarre to think that the horror subgenre of zombie films has itself a comedic subgenre. But with films like “Shaun of the Dead,” “Warm Bodies” and “Zombieland,” it’s clear that great effort is put into this bizarre idea of combining laughs with flesh eating corpses who desperately want brains.

While most of these films dabble in over the top laughs or characters getting into ridiculous situations, part of what makes “The Dead Don’t Die” one of the most insane, and also ingenious, films of the year is how a majority of the humor relies on deadpan comedy.

“The Dead Don’t Die” stars a large ensemble cast including Bill Murray, Adam Driver, Tilda Swinton, Steve Buscemi and Danny Glover. A majority of the film focuses on the police officer duo of Chief Cliff Robertson and Officer Ronnie Peterson, played by Murray and Driver, who investigate a series of strange occurrences throughout the small town of Centerville.

When it’s discovered that zombies are the source of this epidemic, the officers along with Officer Mindy Morrison, played by Chloë Sevigny, try to save the town from the carnivorous, crawling corpses.

Murray and Driver absolutely steal the show with the majority of the screen time. Their chemistry is fantastic and their conversations are mesmerizing, even if they’re about trivial things like coffee and donuts from the local diner or the song “The Dead Don’t Die” by Sturgill Simpson, which appears quite a bit in the film. Other standouts include Zelda Winston, played by Tilda Swinton, who runs the funeral home and is a katana-wielding Buddhist, which is as ridiculously awesome as it sounds.

The entire cast is a collective of horror stereotypes including the country bumpkin, played by Steve Buscemi’s Farmer Miller, the nervous wreck, played by Officer Mindy Morrison, and the teen hipster, played by Selena Gomez’s Zoe. Most of these characters are enjoyable to watch and have comedic moments, but none of them can compete with Murray and Driver.

As a comedy, most of the humor is deadpan which works to the advantage of Murray and Driver. While most zombie comedies are about characters’ over the top reactions to an over the top situations, “The Dead Don’t Die” is hilarious because of how underwhelmed everyone is by the zombie apocalypse. Seeing Murray react to zombies the same way he would react to his toast getting burnt is that of comedic genius.

“The Dead Don’t Die” will definitely polarize and the film’s comedy is not for everyone. The film constantly walks a tightrope between cinematic suicide and comedic genius. But this gigantic comedic gamble ultimately pays off and creates the most unique viewing experience of 2019.