Baseball wins against Ohio after loss to Ball State 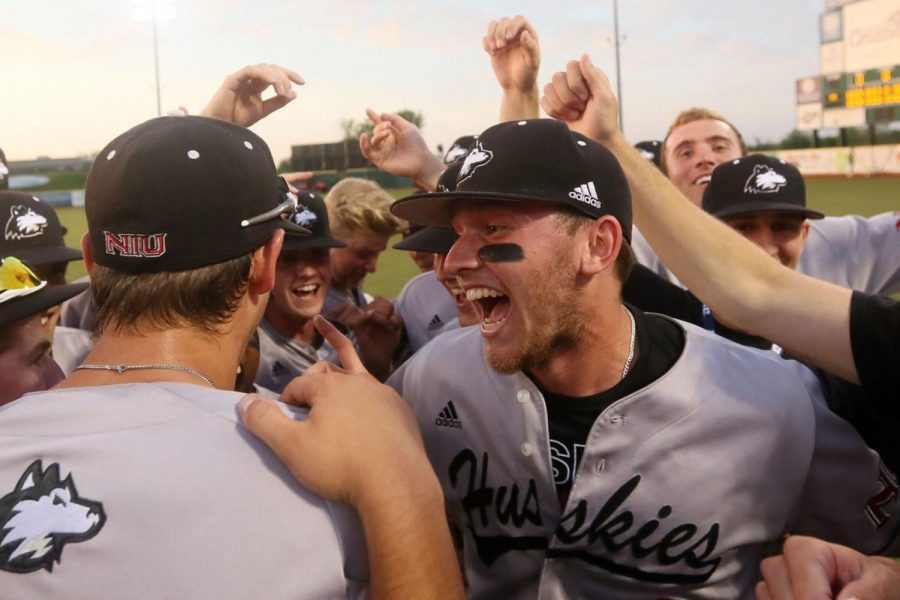 NIU wins 6-3 over the Ohio Bobcats on Friday.

DeKALB — After being sent to the loser’s bracket following a loss to Ball State Thursday, the baseball team kept their conference title hopes alive with a comeback victory over Ohio on Friday.

The Huskies were sent to the loser’s bracket with a 10-4 loss to Ball State thanks to a dominant performance by  Drew Jameson, sophomore Mid-American Conference Pitcher of the Year.

NIU rebounded the following day with a comeback 6-3 victory over the Ohio Bobcats to advance to the loser’s bracket final with a chance to play in the championship game later today.

Head Coach Mike Kunigonis said their game against the Bobcats was a matter of matching wills with Ohio, who had played a six hour, twenty minute game just before.

“It was a nailbiter all the way through,” Kunigonis said. “There’s a lot of fight in those guys and we did a good job of continuing to stick with it.”

NIU handled the Cardinals in the first, with a sac fly by junior infielder Dylan Lonteen scoring a run and junior catcher Jake Dunham hitting an RBI double.

Cardinals junior outfielder Ross Messina and senior catcher Chase Sebby both hit doubles in the bottom half of the inning, bringing in a combined three earned runs to take a 3-2 lead after one.

Ball State pulled ahead further in the second with a two-RBI double by senior outfielder William Baker to make it a three run game.

The Huskies put themselves within one run in the third inning, scoring one run on a wild pitch and first-year outfielder Nick Drobushevich hitting into a fielder’s choice RBI to make it 5-4.

The Huskies were held in check the rest of the way by Jameson, who struck out 10 batters in a six inning start.

Jameson not only picked up the win but also broke the conference single-season strikeouts record, passing the previous record of 141 by Kent State’s Joey Murray last season.

The loss was credited to first-year pitcher Erik Hedmark, who allowed five runs in his two inning start.

The Huskies’ struggles at the plate continued into a do-or-die game Friday night, failing to record a hit within the first six innings.

Ohio got a run on the board in the second with a groundout RBI by junior outfielder Ryan Sargent to make it 1-0.

After the Bobcats scored in the sixth on a wild pitch, the Huskies entered the bottom half of the seventh down 2-0 without a hit.

First-year infielder Malik Peters broke up the no-hitter to lead off the inning with a single, eventually being the first run for NIU on a groundout RBI from junior infielder Dylan Lonteen.

Junior first baseman Jordan Larson tied the game with an RBI single up the middle and became the go-ahead run on a passed ball.

The Huskies were far from done in the seventh. Junior infielder Tommy Szczasny, who is hitting 5 for 11 in the tournament, hit a three-run homer to take a 6-2 lead to end the inning.

Junior pitcher Nate Thomas closed out the game for the Huskies, picking up the 6-3 win in four innings of relief.

The Huskies are now one win away from the MAC Championship game. To reach the title game, they have to redeem an earlier loss in the tournament to Ball State. First pitch in the loser’s bracket finals is scheduled for 11:30 a.min Avon, Ohio.