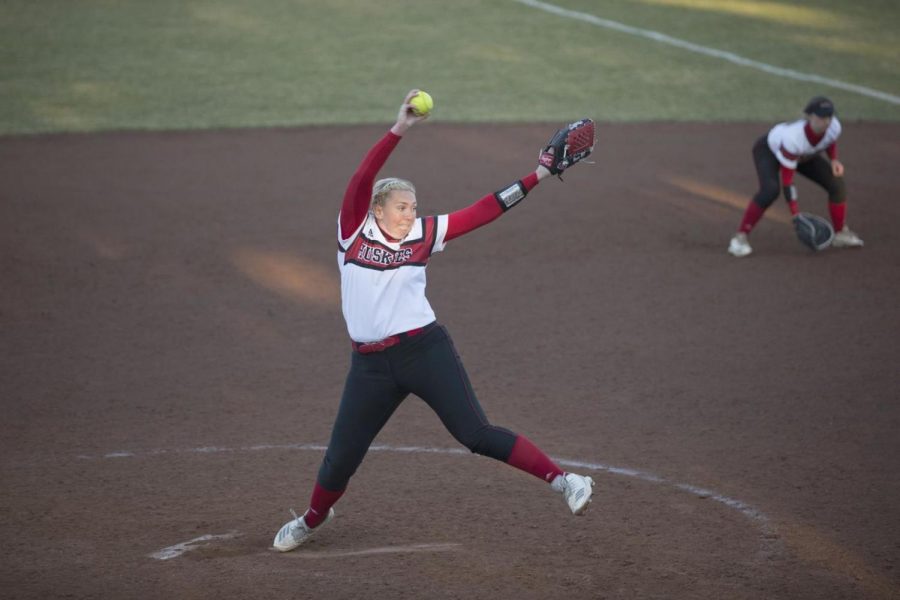 Sophomore pitcher Mackenzie Bryan readies a pitch April 2 during the Huskies’ 7-6 victory over the Ball State Univerity Cardinals. NIU would drop the second game of the doubleheader 5-7 to split the conference series.

DeKALB — The softball team lost its weekend series against the University of Miami RedHawks 1-2 Friday and Saturday, moving to 4-6 in Mid-American Conference play and 17-20 overall.

The Huskies lost their first game of the weekend 3-1 in heartbreaking fashion, after having a 1-0 advantage for nearly the entire contest.

With NIU trailing 3-2 in the bottom of the seventh with one out and runners on second and third, Allen smacked a walk-off two RBI double to left center to bring in the game-winning runs.

In the final contest of the weekend, the Huskies fell to the the RedHawks 4-3 after their comeback attempt fell short.

“Obviously, those are just three great softball games in general,” NIU Head Coach Christina Sutcliffe said. “It’s great to be in them; we just have to figure out how to win two out of those three.”

NIU struck early in the first game of the series. After being walked in the leadoff at-bat for NIU in the bottom of the first, senior outfielder Jenny Van Geertry stole second when first-year outfielder Katie Keller struck out swinging.

Allen brought in Van Geertry with an RBI single up the middle to give the Huskies a 1-0 advantage.

Sophomore pitcher MacKenzie Bryan was dominant on the mound for most of the contest. She struck out six batters and only walked one for the game.

Bryan retired 10 consecutive batters and struck out three successive hitters in the top of the sixth.

After only allowing one hit through the first six innings, NIU’s defense bent just enough for the RedHawks to make a dent.

Miami sophomore outfielder Morgan Lott hit a double down the left field line for the team’s second hit of the game.

Bryan hit the batter in the ensuing at-bat before Wilmot smacked a shot into left center for a three RBI homer, leading to Miami’s 3-1 win.

The RedHawks scored first in Saturday’s opening contest. Miami junior infielder Haeley Tran scored the first run of the game after a passed ball in the top of the third.

In the fourth, Miami junior catcher Kara Leckinger hit an RBI single to bring in Lott, giving the RedHawks a 2-0 lead.

In the bottom of the inning, sophomore catcher Kira Mickelson hit a solo home run, bringing NIU’s deficit to 2-1.

Senior infielder Sam Schmidt tied the game at two when she hit an RBI single to bring in senior infielder Dominique Greeno in the bottom of the fifth.

Miami infielder Ashton Slone hit an RBI double, bringing in senior infielder Jenny Vasquez to give the RedHawks a 3-2 lead. Without one out in the bottom of the seventh, senior outfielder Katie Lamich reached first with a single.

Schmidt was walked in the next at-bat and senior outfielder Jessica Rio pinch ran for her. Van Geertry singled to left field, advancing Rio to second while Lamich was thrown out at home trying to score the game-tying run.

Allen smacked a walk-off double the next at-bat, bringing in Rio and Van Geertry to give the Huskies the 4-3 victory.

NIU wasn’t able to overcome a Miami three-run fourth inning in the final contest of the series. The RedHawks scored the first run of the game when senior infielder Johniann Wahl smacked a solo homer in the top of the second inning.

Miami used a three-run output in the fourth inning to go up 4-0.

After struggling to bring in runners for most of the contest, the Huskies started their comeback attempt in the bottom of the sixth.

Keller opened the inning with a double to right center. In the next at-bat, Mickelson hit a single to center field, advancing Keller to third, before Rio pinch ran for her.

Junior outfielder Kayla Scaperrotta, who pinch hit for senior infielder Abby Howlett, brought in Keller and advanced Rio to third with an RBI single to give the Huskies their first run of the game.

Lamich brought in Rio with an RBI single to close the inning and reduce NIU’s deficit to 4-2. The Huskies held the RedHawks scoreless in the top of the seventh.

Schmidt opened the bottom of the inning with a single to center field. First-year outfielder Amberly Rodriguez replaced Schmidt as a base runner and in the field.

Van Geertry hit an RBI double down the left field line, bringing in Rodriguez and reducing NIU’s deficit to 4-3.

The Huskies weren’t able to bring Van Geertry home, as Miami tallied three consecutive outs and won the game by one run.

NIU will return to action 1 p.m. Wednesday against Ball State in Muncie, Indiana.