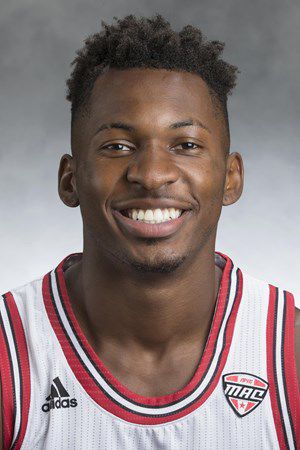 DeKALB — Junior guard Eugene German announced his intention to declare for the NBA Draft for the second consecutive year while maintaining eligibility for a potential college comeback.

German said to NIU Athletics Wednesday that at the moment he wants to improve his game by playing in front of NBA teams and scouts.

“My goal is to get better by going through the workouts and seeing what I can improve on,” German said. “If I get picked up it’s a blessing, but it is also a blessing to be able to come back to school, so I’m just looking to get better and get feedback on what I need to improve on.”

The Gary, Indiana native averaged 20.4 points this past season, good enough for the second-highest scoring mark in the Mid-American Conference. German was also named to the All-MAC Second Team.

After averaging 27 points a game in the MAC Tournament, German was named to the MAC All-Tournament team. The Huskies made it to the semi-finals before falling to Bowling Green.

German declared for the NBA Draft last year before ultimately withdrawing to remain in college for his junior season.

German will be able to participate in the Draft Combine from May 14-19 in Chicago with the Draft scheduled for June 20.