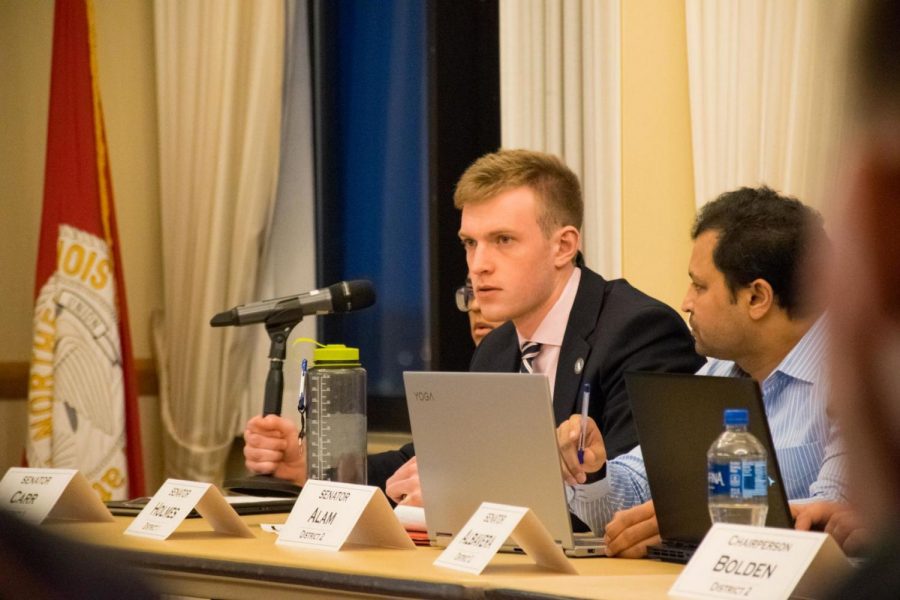 In this February file photo, Senator James Holmes grips a microphone during an SA senate meeting in the Holmes Student Center.

The Student Association is holding special elections Friday after the first executive election left 22 empty spots in the senate and failed to elect a president. It is important students attend the election and vote.

It is crucial students vote in the special election because SA holds a lot of influence on campus. SA allocates $1.6 million dollars to 200 student organizations throughout the year, according to HuskieLink.

“We have a lot of influence; we have a lot of ways to help make sure that voices [are] represented and heard,” Speaker of the Senate Tristan Martin said. “If students have a problem, we as student leaders lend an ear to that and accurately represent it and hopefully fix it moving forward.”

In order for the SA to truly represent the voice of the student body and serve it, students need to vote.

A total of 374 students, including those who chose not to vote for every position, participated in the executive election, according to SA election results.

This is an alarmingly low number, considering how many students are on campus. There are 15,755 students enrolled at NIU, according to spring 2019 enrollment numbers, and only 2.3 percent of those students voted in the general election last week. If only 2.3 percent of the population vote, it’s impossible for the SA to represent the whole student body.

During the first round of general elections, no one ran for president. However, students will have a chance to vote for a president in the special election. SA election commissioner Brandon Lesnicki said there will be someone running to fill the position in Friday’s special elections.

“We are supposed to be representative of people; we can’t represent people properly if we don’t have a lot of voters,” Lesnicki said. “The more people you have, the more likely you are to see the proper values people want seen, seen.”

Martin said since the SA’s founding in 1968, SA’s goal has been to make sure the students’ voices are heard. In order for students to have their voices heard, they need to vote for those who will represent them.

As a student body, it is our responsibility to vote and take part in these elections.