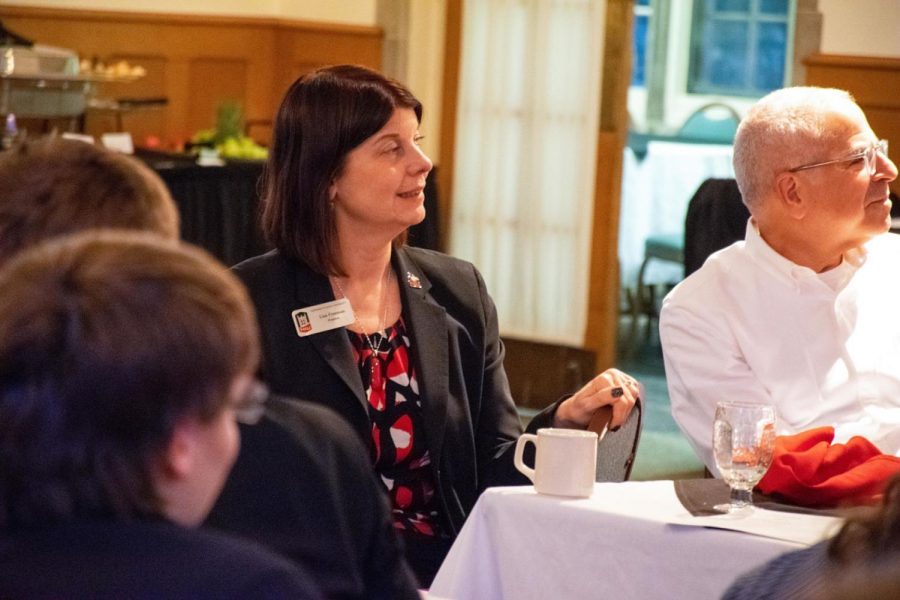 NIU President Lisa Freeman was in attendance Friday during the 25th Annual Pride Dinner in the Chandelier Room of Adams Hall.

DeKALB — Associate professor Katy Jaekel and senior Ronan Kaiser were presented with the Howard and Millie Eychaner Award during the 25th Annual Pride Dinner and Awards Banquet for their advocacy on LGBTQ+ issues on campus.

The event is sponsored by the Presidential Commission on Sexual Orientation and Gender Identity, the Gender and Sexuality Resource Center, Prism, Transitions and the Center for the Study of Women, Gender and Sexuality. Those who attended celebrated achievements in LGBTQ+ advocacy on campus.

Molly Holmes, director of the Gender and Sexuality Resource Center, said the Eychaner Award is the longest standing LGBTQ+ advocacy award given at NIU and is awarded to a student and faculty member or alumnus.

Holmes said the Eychaner’s were known for their outspokenness on LGBTQ+ issues in DeKalb, especially at churches.

“This award allows us all to pause and reflect on the great work that gets done on this campus, often without expectation of such an honor,” Holmes said. “With the amount of work, advocacy and visibility [the recipients] have given the community, one might say they are a collective force.”

Holmes said within Kaiser’s time at NIU, he has steadily built experiences centered on LGBTQ+ advocacy, social justice and positively impacting everyone he comes into contact with.

“I’m incredibly proud to be a Huskie,” Kaiser said. “Even though a lot of work has been done, there’s still more work to be done. I will always remember my time here, [and] as I go forward to advocate for students elsewhere, all of my experiences at NIU will follow me, and I just want to say thank you.”

Within Jaekel’s short time at NIU, she has made a name for herself as a resource for students, an advocate and a campus partner, Holmes said. She said Jaekel is committed to her researchby making sure queer and transgender students feel comfortable in the classroom.

“The things I get to do on this campus, the time that I get to spend with these scholars who have made me better, smarter and more compassionate, it doesn’t feel fair that I would win an award for something that has made me better,” Jaekel said.

The third award was the Margie M. Cook Leadership Award, which was awarded to Trevon Smith, first-year mathematical sciences major.

LGBTQ+ organizations such as the Speakers Bureau and Prism were recognized for the work they contribute to campus as well. Speakers Bureau is a group of volunteers who speak about their experiences as lesbian, gay, bisexual, transgender, or queer individuals or heterosexual allies, according to the Prism Facebook page.

Jeanne Meyer, chairperson of the Presidential Commission on Sexual Orientation and Gender Identity, said over the past 25 years NIU has been at the forefront of LGBTQ+ rights, including in 1988 when the university added the protection of sexual orientation to its constitution.

“I wish our struggle was over,” Meyer said. “I know it’s not as bad as it used to be, but there’s a lot of work that needs to be done. We need all of you to help with that and all of you to please lend a hand, and let your voice be heard.”