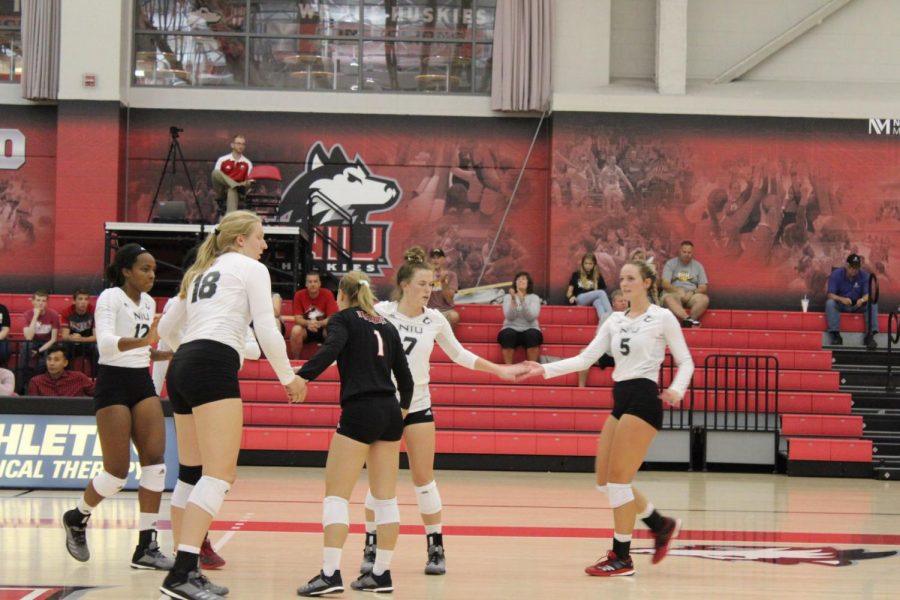 The volleyball team concluded its non-conference regular season play for the 2018 campaign with three losses during the weekend’s Western Kentucky University Tournament.

“We showed today, playing against a team in Western Kentucky, that we are capable of playing against the best teams in the country,” Head Coach Ray Gooden said. “It is just a matter of putting it together.”

The No. 22 ranked Cougars dominated NIU; the Huskies did not have a single lead at any point during the match. NIU faced a 5-2 deficit early in the first set before the Cougars used a 6-1 run to take an 11-3 lead. The Huskies didn’t bring their deficit to less than six and fell to Washington State 25-14 in the opening set of the match.

NIU had a more competitive showing in the second set. The Huskies trailed the Cougars 7-5 after Washington State opened with three consecutive points. The Cougars tallied four of the ensuing five points to bring their advantage to five before NIU used a 5-2 run to bring Washington State’s lead to 13-11.

The Huskies faced an 15-6 deficit in the early parts of the third set following three consecutive points by the Cougars. NIU went on a 5-0 run, which included three senior middle blocker Meg Wolowicz kills, to bring Washington State’s advantage down to four. The four-point deficit was the most the Huskies cut into the Cougar’s lead for the remainder of the set as Washington State won 25-18 and swept NIU in the match.

The Huskies offense struggled for most of the contest; they recorded a .099 hitting percentage for the match and did not hit over .140 in a set. Sophomore outside hitter Jori Radtke tallied her third consecutive double-double with team-highs 13 kills and 10 digs.

The Huskies and Buccaneers played to a 5-5 tie to start their match before East Tennessee State gained an 8-5 advantage by scoring three successive points. NIU sandwiched a service error in between two first year setter Grace Balensiefer-assisted Wolowicz kills, bringing the deficit down to two before the Buccaneers rattled off a 6-1 run to take a 15-8 lead. The Huskies battled East Tennessee State to a tie for the remainder of the set and the Buccaneers won 25-18.

The two teams went toe-to-toe with one another before the Buccaneers used a 7-1 run to take a 14-8 advantage. The Huskies and Buccaneers exchanged points through the middle part of the set, with Eastern Tennessee State maintaining a 22-16 lead, before NIU scored eight of the next nine points to take a 24-23 advantage and one point away from a set victory.

There were nine ties and three lead changes through the remainder of the set, but the Buccaneers came out on top to win 34-32 to take a 2-0 match advantage.

“It is almost like being able to take a punch and throw a punch back,” Gooden said. “We put ourselves in a spot where we were able to continue to put pressure on teams so we could do those things. We did a good job of putting pressure on ETSU in that second set. We forced errors and made some plays just to come up a little short.”

The Huskies played the Buccaneers to a 9-9 tie before Eastern Tennessee State went on a 9-1 run to go up 18-10 in the third set. NIU managed to bring the deficit to six, but it was to no avail as the Buccaneers won the set 25-15 and swept the Huskies in the match.

Western Kentucky maintained control of the first set from the opening serve. The Lady Toppers scored the first two points of the round and did not lose their advantage for the remainder of the set. Western Kentucky had a 17-10 lead midway through the round before the Huskies went on 5-2 run to bring their deficit down to three. NIU did not cut any deeper into its deficit for the remainder of the set and started the match down 1-0.

Gooden said he thought NIU stepped things up defensively against Western Kentucky. The Huskies held the Lady Toppers to a -.025 hitting percentage in the second set.

“I thought we played good defense, especially during the Western Kentucky match,” Gooden said. “We did a good job of blocking and also the floor defense. I thought we found better rhythm on the outside, and I thought out middle blockers became more involved.”

Balensiefer tallied a career-high 44 assists in the match against the Lady Toppers.

“For being a freshman, she does some pretty positive things,” Gooden said. “She also does some freshman things too, but that is part of what developing and growing is. People put ourselves, including her, in spots so we can be successful. So, we are pretty thankful for what she can do.”

Western Kentucky and NIU battled to a 10-10 tie to start the third set. The Lady Toppers gained the first significant advantage of the set when they went up 16-13 before the Huskies used five combined Wolowicz, Radtke and Kemp kills to go on a 8-0 run to take a 21-16 lead. Western Kentucky scored five of the next six points to bring its deficit down to one, but NIU scored three of the final four points of the set to win 25-22 and take a 2-1 match advantage.

Both teams went on 4-0 runs early in the fourth set before playing to a 6-6 tie. NIU and Western Kentucky exchanged points until the Lady Toppers scored five successive points to go up 18-11. The Huskies scored four of the next five points to cut their deficit to four, but Western Kentucky maintained its lead for the remainder of the match and forced a fifth set.

The Lady Toppers opened the fifth set with a 4-0 advantage. NIU scored three of the ensuing four points to bring its deficit down to 5-3. Western Kentucky’s lead grew to five after they went on a 4-1 run. The Huskies exchanged points for the remainder of the match, but the Lady Toppers tallied the three concluding points of the set to win 15-9 and claim a 3-2 match victory.

The Huskies will turn to their attention to Mid-American Conference play when they face the University of Toledo Rockets 7 p.m. Friday and Ball State University Cardinals 7 p.m. Saturday at Victor E. Court. Gooden said he thinks the non-conference matches has prepared NIU for its conference matchups.

“People can either embrace the adversity or you can run from [it],” Gooden said. “And we have never been one to run away from it. It has been hard, and we have learned a lot of lessons from it, but I think it has really helped us understand what it takes to be at a high level team.”