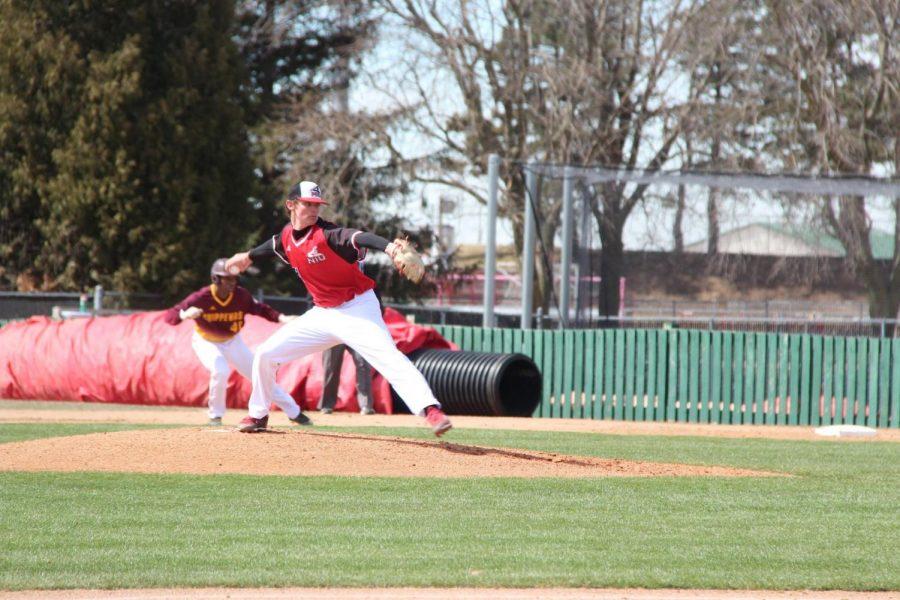 “We really just came out today and battled all game,” said Head Coach Mike Kunigonis. “This is what we needed from the guys, especially when our backs have been up against the wall the past two games.”

NIU (6-16, 1-2 Mid-American Conference) got on the board right away in the bottom of the first inning off of three hits and an error, giving freshman pitcher Michael Lasiewicz the comfortable early lead.

The Huskies scored again in the bottom of the second inning off of two hits, making the lead 2-0.

There wasn’t a whole lot of offense in the third through fifth innings with Lasiewicz mowing hitters down, just as he has all season.

Lasiewicz went five innings giving up five hits, walking four and striking out six, knocking his season ERA down to 2.70.

“It’s funny because he wasn’t even at his sharpest today,” Kunigonis said. “He threw 95 pitches through five innings, but he just came out grinded for us and competed.”

The Huskie offense had an uproar of a sixth inning going through three Chippewas pitchers.

Central Michigan (7-16, 2-1 MAC) countered the big Huskie inning with two runs in the top of the sixth inning off freshman pitcher Jack Phillips, knocking him out of the game after one inning pitched.

The Chippewas added another three runs in the top of the seventh inning on a double from junior outfielder Jacob Crum.

NIU used two more pitchers in the later half of the innings with sophomore pitcher Nate Thomas going one inning and giving up three runs, followed by redshirt senior pitcher Andrew Frankenreider closing out the game in the eighth and ninth innings.

NIU senior infielder Brad Wood led the way for NIU on offense going 3-for-5 with two runs scored and an RBI.

The Huskies will look to carry the momentum against the University of Illinois-Chicago Flames 4 p.m. Tuesday in Chicago.

“We really just want to come out and let them know we had a tough day, but that’s not us,” Kunigonis said. “We play them two more times and we’re coming to win this series.