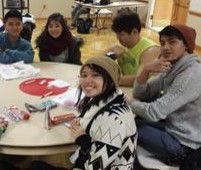 OHANA, meaning family in Hawaiian culture, is a program that tries to empower students to become better leaders in their community through activities, conversations and interaction with other club members.

The program has a variety of committees, such as the Outreach/Public Relations Committee and the Cultural Education Committee students can join, and offers members the chance to have a mentor.

AARC Director Michelle Bringas said the club can be valuable for all students, not just Asian-Americans.

“We think it’s important for all student,” Bringas said. “We try and focus on four elements of advocacy: leadership, community building and cultural education.”

Each meeting is centered on a topic that tries to improve the leadership abilities of students, Bringas said the topic for the Tuesday meeting was about legacy. Students discussed what legacy meant to them and who has made an impact in their lives.

The group also discussed ideas of ways to be a part of the week long celebration of diversity that is being organized by the Student Association to be held near the end of March across campus.

“Every topic we hope to be relevant and interactive with folks to expand their own leadership skills and also to learn about another culture, particularly as it pertains to Asian-American issues,” Bringas said.

Carlo Aseron, a graduate assistant at the Asian American Resource Center, said the club has helped him connect with fellow Asian-American students.

“For me it really does mean family, and it’s a place where our community can get together and hang out,” Aseron said.

“I was intrigued by it, what it was, and I wanted to learn more about it,” Erpelo said. “Now I’m here.”

The group also has a mentor and proteges system, where more seasoned students help younger members with issues they have related to culture or academics.

Erpelo said that as a protege, the program helps him break out of his bubble and become more social than when he was in high school.

“It made me become a better person,” Erpelo said. “It made me come out of my shell. When I was in high school, I was shy. Now I’m not that shy anymore.”

The club’s next meeting is called ‘A Day in Her Shoes: Experiences as an Asian Woman’. OHANA will host a discussion on serious issues facing women today. The meeting will be 5 p.m. March 6 and will be held in the Capitol Room at the Holmes Student Center.