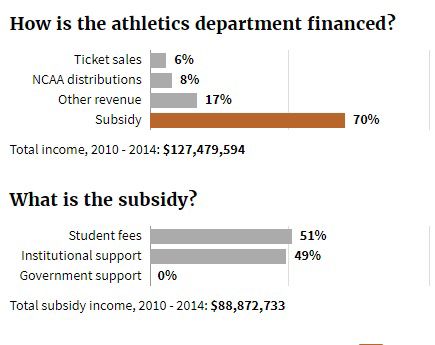 Full-time students are unknowingly paying a mandatory fee of $797.04 per year to the Athletic Department; if this fee cannot yet be optional, then students and parents paying for tuition at least deserve to be informed about exactly what they are paying for.

When paying tuition, students are not provided with a breakdown of costs and do not receive an explanation of what the mandatory general fees and expenses are — fees are charged per credit hour, up to 12 hours. As long as students are required to pay a fee that is not beneficial to their education, especially if they are already required to buy their own supplies, books and pay extra department fees, the school should be completely transparent with their charges.

“When I looked into it, there was a spot on the website that outlined the various events and programs that were funded by this general fee, but nowhere did it give meaningful information about how much money any particular program received,” said Kiley Niemeyer, senior mechanical engineering major.

The Athletic fee is composed of three parts: Athletic Program Charge, Convocation Center Charge and the Huskie Stadium Charge. The Athletic Program Fee, which “supplements the University’s diverse athletic programs and provides students with a means to enjoy the University’s athletic events without direct cost to the student,” is the bulk of this athletic fee at $22.59 per credit hour, according to the Fiscal Year 2018 Tuition, Fee, Room and Board Recommendation from Alan Phillips, former vice president for Administration and Finance. In exchange for the fee, students receive free access to home athletic events.

A student who spends four years here at full-time status will have paid a total of $3,188.16 straight to the athletic department. The student’s benefit to paying this, is hardly used as “free tuition” was offered last year through the Mission 6 initiative to incentivise student game attendance. However, the goal of 6,000 students per home game was not reached, and the free tuition went unawarded, according to a Feb. 2016 Northern Star article.

If one student went to all six home football games this year, each ticket would have cost them $132.84 through the athletic fee if they didn’t attend any other sporting events. The general admission season pass is only listed as $60 on the NIU Huskies Football ticket website.

From 2010 to 2014, ticket sales accounted for 6 percent of the Athletic Department’s total income of $127,479,592, according to research done by the Integrated Postsecondary Education Data System. Out of that total, 8 percent came from NCAA distributions, 17 percent came from “other revenue” and 70 percent of the total athletic department was financed through a subsidy.

Out of the total income for those four years, 70 percent is the total subsidy income – subsidy meaning the amount that was provided to the Athletic Department by the institution, government or individuals. Of that money, 49 percent came from direct institution support and unrestricted funds, as well as services provided to, yet not charged to athletics; the other 51 percent came straight from the students. But this student contribution was not voluntarily, instead accumulated through mandatory general student fees. Over those four years, student fees totaled $45,324,838.83, nearly 36 percent of the Athletic Department’s total income, which accounts for the highest provider of income, according to the same study by the IPEDS.

Using mandatory general fees and expenses as a disguise for the athletic department to get money from students is a smart move, as students do not usually question what is required of them. The information provided by the IPEDS has not been updated since Nov. 2015, and NIU has since taken down any diagram used to breakdown fee disbursement as of fall semester 2015. Student’s wouldn’t be able to find the information easily even if they wanted to.

“The biggest problem I personally have with this issue is that there is no accountability for how the school is actually using the funds,” Niemeyer said. “Lack of transparency surrounding money allocation is an issue that organizations in general should do their best to avoid because it leads to a lack of trust between its members and management.”

Considering NIU and Illinois are in the midst of a budget crisis, people who pay tuition should know what their money is going toward and how it will help dig the state and university out of the hole they sit in. NIU could always consider diverting part of that $45 million made over four years elsewhere and giving students what they paid for versus free admission to games that not enough people seem to attend.

If a breakdown were to be presented up front, students could possibly sway two ways. Because it is a mandatory fee that must be paid in order to attend classes, there is no getting around payment any time soon. Students either have the option to disagree with the fee and pay it regardless, or they can embrace the fee, as junior kinesiology major Zach Anderson said.

“It’s their money; they should know where it’s going,” Anderson said. “If students knew how much money they were spending on the athletic department, it might give them an incentive to go. Like, ‘I’m spending all of this money, I might as well get something out of it.’”

While students should support athletes, the price of equipment, transportation and uniforms should not fall on the student body’s shoulders – or at least not a price that outrageous. Providing a breakdown could get students off their feet and into the stadium if they felt their money was being wasted. Attendance and sales could rise, which could make up for some of the money students are responsible for through the fee, thus lessening the fee while keeping athletics happy.

There are Huskies on campus that care only about their future job and degree. Students already pay for tuition, room and board and seven other fees, including a campus recreation fee and a student activity and services fee; an additional fee solely for athletics should not be crucial to the programs success. All mandatory fees that students pay should be presented so students can learn how their money is helping themselves — not just the school. What students decide to do with that information is up to them.