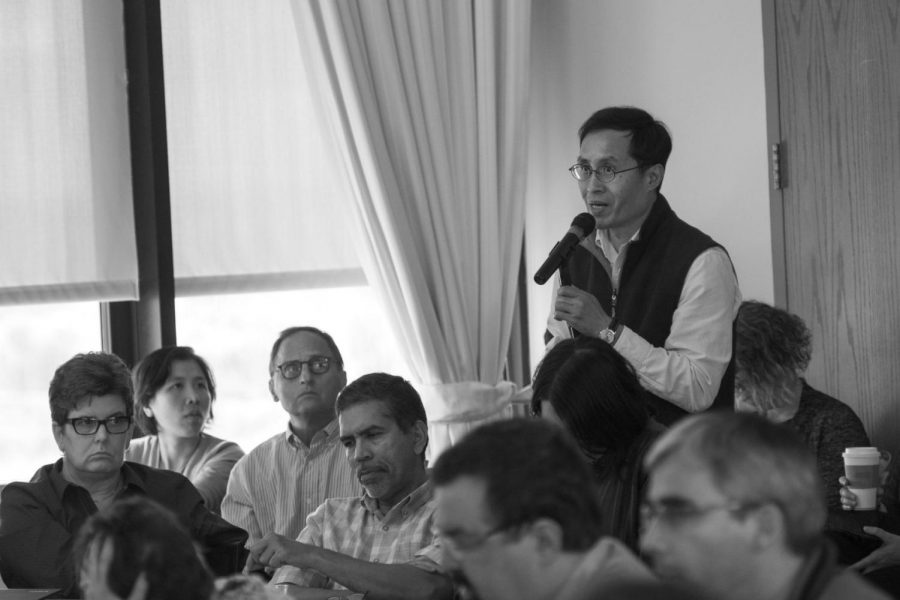 DeKALB — Members of Faculty Senate expressed their opinions to the Board of Trustees leadership regarding the presidential search during a meeting Wednesday.

Wheeler Coleman, Board of Trustees chair, and Dennis Barsema, Board of Trustees vice chair, met with the Faculty Senate to get members’ input on the timing, criteria and process by which the Board plans to search for a permanent president of the university.

The Faculty Senate was given nearly an hour to discuss and share their thoughts on how to improve the system, many calling for public notification of the names of the final nominees and a strong emphasis on candidates having a good understanding of university ethics and practices.

Coleman said the plan for the search could come out in full at the end of the month.

Senators discussed how issues like the Illinois budget crisis may affect the search, as Illinois is the second worst state in the nation in drawing in students from out of state, only better than New Jersey.

Senator Kendall Thu used the recent appointment of Bruce Harreld as the University of Iowa’s president as an example of why a candidate’s higher education experience is vital if they are to hold the highest position at a public university. Harreld and the university were criticized heavily by students and staff, as Harreld has no previous experience in the education field and on his resume put leadership experience for a company in Colorado that didn’t exist.

“I think it’s centrally important for the president to have been a faculty member in order to understand what challenges the university faces,” Thu said.

The University of Iowa is Thu’s alma mater.

The Senate debated about the timing of the search, as well. Thu said the university is doing well with Freeman and the process is too important to rush.

“I feel as though we are in good hands with the interim president, and it’s better to take a little more time to do it right and make sure we have proper vetting in these situations,” Thu said.

Senator Jim Millhorn said the amount of interim positions at the university is alarming, and the first position that needs to be filled is the president’s.

“I feel like there is a sense of urgency,” Millhorn said. “I haven’t seen an institution that had more interim positions in all my experience. We need to get some of these positions filled, and in order to do that, we need to have a president.”

During the meeting, acting president Lisa Freeman, also provided her vision for the future of NIU, outlining her goals for the university during her time as president.

“Our work needs to continue,” Freeman said. “Change will occur. We will acknowledge ongoing challenges and make progress.”