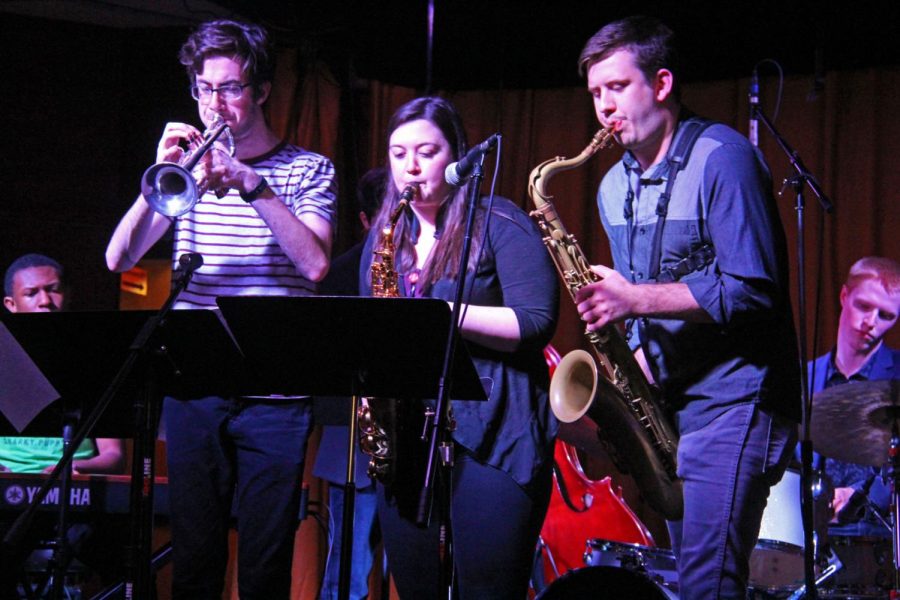 The Jazz Combo Fest put on by the School of Music took place at the House Cafe Tuesday night.

The Northern Star Editorial Board believes all students should have the opportunity to enroll in any classes that are possible given their credentials and majors. Specifically, the Editorial Board agrees the School of Music does not allow students to explore its classes like other NIU colleges and schools.

Freshman psychology major Sean Thompson said he feels the School of Music is limiting his ability to learn more about music, which he is passionate about. He said he is particularly frustrated with his inability to enroll in a music theory class simply because he is not a music major.

“If you’re asking me if I think they should just restrict it to people who are getting a music degree, I’d say no,” Thompson said. “Music is one of those things that interests a lot of people, and I think [the School of Music would] get a high turnout. It’s just so limiting to have them say [that] I can’t take even a beginning music theory class, especially when music is something that I’m very interested in.”

Lynn Slader, admissions coordinator for the School of Music, said program officials do the best they can with their budget and faculty. The sizes of music classes vary, but it is not uncommon for a music class to hold just 15 students, which can be expanded to allow interested non-majors to enroll.

“We try to give as much as we can and open as many classes as we can for non-music majors,” Slader said. “But we also know that they’re not here to major in music.”

Slader said she doesn’t believe the classes would be popular among students and speculated that one in 1,000 students who aren’t music majors would be interested in taking a class like music theory. Thompson said he disagrees with this statement.

Junior mathematics major Kevin McNeely also disagreed and said he would enroll in a music theory class if he could.

McNeely said he believes the demand is there but the opportunity is not, and he knows several students that would be interested in taking a music course such as music theory if given the opportunity.

It seems as though there is a disconnect between the School of Music and students interested in music, as many agree they are limited when it comes to music classes they can enroll in.

“I know a lot of people who aren’t music majors who would like to take these classes because, for some people, even if it’s not their major, they still want to take a class and learn more about music,” McNeely said. “You can’t really know if the demand is there unless you do something to try it.”

Interested non-majors are not demanding that all music classes be open to everyone, and neither is the Editorial Board. Instead, the Editorial Board thinks the School of Music should provide more opportunities for students interested in this path of study, just as other programs offer several general education options for other majors.

Other higher education institutions such as the University of Illinois at Urbana-Champaign, for example, offer a music minor and more than 28 music courses for non-majors, excluding all of the ensembles that the school also offers, according to their course catalog website. Some of these courses require a fee for non-majors, but they are open to all, and some are designated specifically for non-music majors, such as the Rudiments of Music Theory course.

To provide students with more variety, the Editorial Board believes the program officials for the School of Music should make an effort to understand the student body’s desires. Implementing a charge for non-majors would provide them the opportunity while also eliminating those who are not serious about enrolling in music classes and could be a good way to test interest.

“I took music classes when I was younger, and I would like to continue that because music is important to me,” said sophomore accountancy major Glaisha Segura. “NIU does have a good music program, but I think they should try something new and be more open to letting other people in. I know [Illinois State University] is bigger than us, but we could at least make an effort [because] I don’t think it’s fair to assume people wouldn’t want to take these classes since they’ve never had it available, so they can’t really say that.”