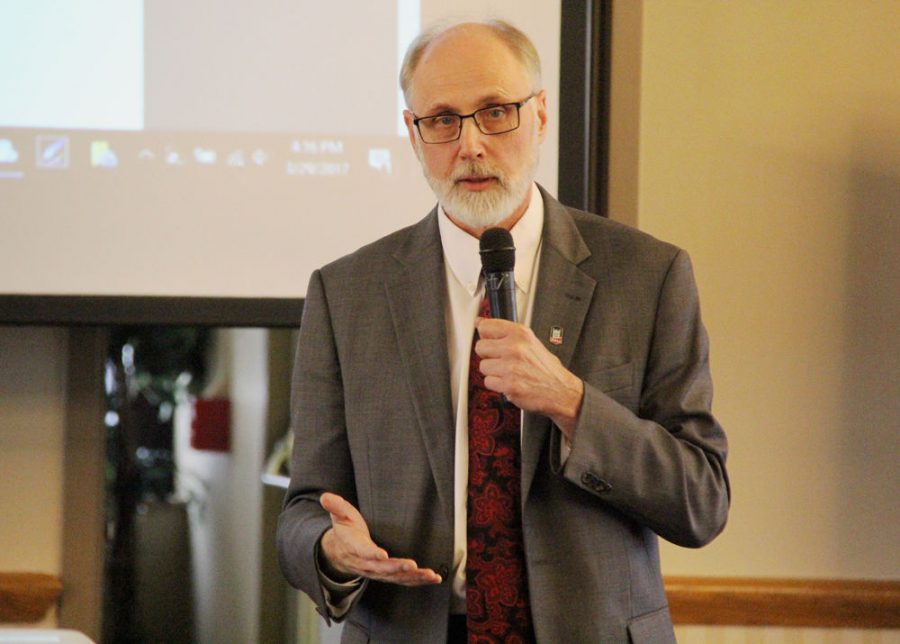 President Doug Baker gives a presentation during a March 29 Faculty Senate meeting in the Holmes Student Center, Sky Room. Baker announced a campus-wide involvement in his presidential review in a Monday report.

DeKALB — President Doug Baker announced the opportunity for campus-wide involvement in his annual review Monday following requests from Faculty Senate for a voice in the process.

The president is subject to review regarding his or her compliance with university procedures and policies and compliance with federal and state statutes, according to the Board of Trustee bylaws. Baker, whose contract is up in June of 2018, has been reviewed annually since his hiring in 2013.

As part of the “360 degree review,” about 100 faculty members, staff members and students will be interviewed about feedback on Baker’s performance, according to an April 17 Baker Report. The interviews will be held by Greenwood/Asher & Associates, a third-party firm that has assisted in administrative evaluations at Big 10 and Ivy League institutions, Spokesperson Joe King said. The firm’s compensation is contractually bound to not exceed $30,000.

The Board of Trustees will determine whether the new process was effective when the review is completed, King said.

“The Board is very grateful for the participation of everybody that’s going to be involved,” King said. “When the process is complete, they’ll kind of analyze how it goes and then make that decision as to whether this is something we want to do annually.”

“Our goal is to come away with feedback that will aid in understanding what has been successful, what potential exists for growth and what improvements need to be made,” Baker said in the report.

Campus feedback will be presented to the Board of Trustees in May or June. Trustees will use the responses to assist in the completion of their annual evaluation, which will be published online for the first time due to a new state law effective this year, according to the report.

The announcement came on the heels of a March 29 Faculty Senate in which members passed a resolution requesting formal involvement in the presidential review process. At the same meeting, members chose to continue a vote of no confidence for Baker, which would formally signify the faculty’s lack of support for him, although no actions against Baker could result from the vote.

The proposition to take the vote was inspired by an ongoing discussion between Baker and the Faculty Senate about a campus update released by Baker in December about “weaknesses in internal controls, some limited compliance violations, and lack of clarity of policies across multiple units,” that occurred in 2013 and 2014, according to the email. Members of Faculty Senate felt that Baker did not provide enough clarity about the mistakes he admitted to in the email.

Members have also raised concern about an ongoing investigation of Baker by the Office of Executive Inspector General for the Agencies of the Illinois Governor, a state agency that investigates reports of wrongdoing by entities and individuals including employees of public state universities, according to the organization’s website.

Because it is an open investigation, its nature has not been disclosed.

“This is our immediate response, and this provides an opportunity to show goodwill on our part and collaboration on our part toward the Board of Trustees,” said Faculty Senate President Greg Long during the meeting.