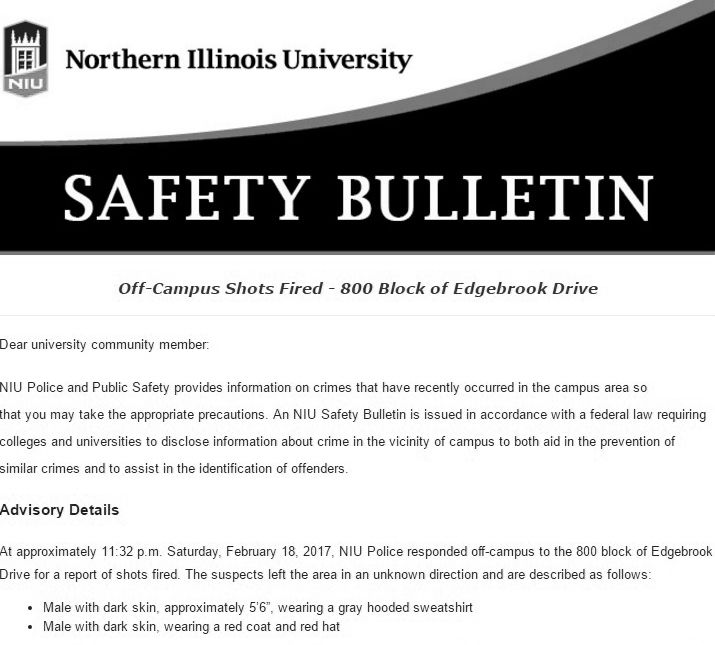 Safety bulletins serve as an important tool for students, faculty and community members to receive on-campus, crime-related alerts through texts and emails, but lately, NIU is not verifying if people receive the notifications.

The Northern Star Editorial Board suggests that the Department of Police and Public Safety, the Division of Information Technology and the Division of Marketing and Communications consider re-evaluating how people receive their safety alerts and whether they actually do.

Out of 51 respondents who voted on the Northern Star’s Feb. 23 poll regarding the shots fired Feb. 18, 62 percent said they did not receive an email or text alert.

“There are two categories [of alerts] — we’re mandated by law to notify our community when there is a true life-threatening emergency that is impacting our campus community,” said NIU Police Chief Thomas Phillips, according to a Nov. 28 article in the Northern Star regarding the safety of NIU.

“That’s called an emergency alert. The second one is called a timely warning, which is when something has happened either in our community or in the extended area that may impact students.”

There is a third category: community awareness bulletins, which inform the campus community about health and safety issues like weather and traffic information. However, these are never sent out as text alerts. They are posted on the Current Safety Bulletins webpage and sent out as emails because they are not considered as impactful to student safety as timely warnings and emergency alerts are.

The Northern Star filed a Freedom of Information Act request regarding the safety bulletin records from the 2015 to 2016 academic year. The information provided by the FOIA, received on March 10, stated a total of 29,299 students, employees and police officers received the three types of NIU safety bulletins through email while a total of 20,603 people received alerts through text message.

The FOIA filed also questioned how many bounce-back, “mailer-demon,” or unsent text and email errors occurred while trying to send out safety bulletins. The official number for these categories was unable to be determined, but it was mentioned that there is a folder of data labeled “unable to contact,” according to the FOIA received. The Northern Star has since filed another FOIA requesting the data of how many students were not able to be reached.

Phillips said he was unaware that some people did not receive emails or text messages, and he is currently looking at different options of mass notification software other than Everbridge, the current software in use.

Students have a variety of options if they do not receive any of the notifications. If they wish to receive texts, they can re-subscribe to emergency text alerts or download the ContactBridge app — both can be found on the NIU website by clicking the “Faculty & Staff” tab where emergency information is located under the campus safety section. Phillips also recommended that following the department’s Facebook page could be helpful and also show students emergency information on their timelines.

“I have not gotten a text or email [safety bulletin] in months,” said junior anthropology major Martha Petrie. “I don’t think I have since last year, and I am at least signed up for text messages. I think the text alerts were really helpful. I liked them. Maybe they just need to re-up that because I don’t know why I don’t even get the texts anymore.”

Despite the 29,299 people who the FOIA stated received alerts for texts and emails, students said they had not received or had sporadically received alerts throughout the school year.

“I never get anything,” said Nicole Nelson, junior public health and administration major. “I thought they stopped doing them because we would get them so often.”

The three departments working together in providing this information to people either need to find a new notification software other than Everbridge to ensure that all students and faculty receive alerts or they need to investigate who cannot receive alerts and reach out to them to resolve this problem.

The Northern Star Editorial Board believes that it would be beneficial to update the system used to alert students. It is important that all students be aware of their surroundings while here at NIU, and it is unacceptable for some people to go unnotified when they wish to get alerts.